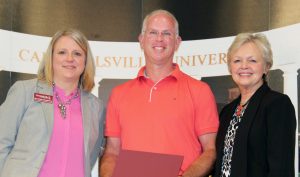 Bisher is a third grade teacher at Camp Dick Robinson Elementary School, where he has taught since 2005. He graduated in 1988 from Fairfield Senior High School in Ohio. In 1994, he obtained a bachelor of science in education from Georgetown College. In 1996, he received his master of arts in library science from Eastern Kentucky University. He also has a Rank I in educational administration.

He is married to Diane Bisher and they have one child, Clay Bisher.

Simpson teaches special education at Garrard Middle School, where he has been working since 2009. Simpson graduated from Garrard County High School in 2003. He attended Eastern Kentucky University, where he obtained his bachelor’s degree in fifth- to ninth-grade English and language arts and social studies in 2009; and his master’s degree in K-12 learning behavioral disorders (LBD) education in 2012. His parents are Dawn and J.K. Simpson from Lancaster.

Chamberlain teaches social studies at Garrard County High School, where he has taught since 1995. He graduated in 1987 from Lafayette High School. In 1992, Chamberlain received a bachelor’s degree from Indiana University. In 1994, he obtained his master’s in education from University of Kentucky. 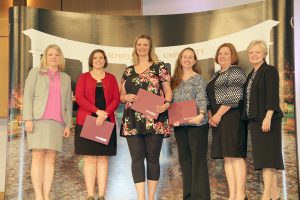 Wilson is a third-grade teacher at Burgin School, where she has taught since 2010. She graduated from Lincoln County High School in 2001. She attended University of the Cumberlands to obtain her bachelor’s degree in elementary education in 2005, and her master’s of literacy specialist in 2015. She is married to Robert L. Wilson and has two children, Jude Flynn and Beck Tobias Wilson. Wilson’s parents are Linda and Bruce Bailey from Stanford.

Rizzuto is a special education teacher in middle school at Burgin School. She graduated from Boyle County High School in 2002. Rizzuto obtained her bachelor’s in elementary education at EKU in 2010. In 2014, she obtained her master’s in learning and behavior disorders (LBD) from University of the Cumberlands. Rizzuto has one child, Maddison Rizzuto.

Barlow is a social studies teacher in high school at Burgin School, where she has been working since 2015. She graduated from Mercer County High School in 1995. She attended EKU, where she obtained her bachelor’s degree in 2000 and her master of science degree in 2003. She also obtained a master of arts degree from Georgetown College in 2006. 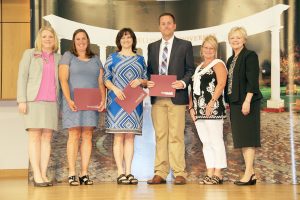 Flach is a fifth-grade special education teacher at Mercer County Intermediate School, where she has been teaching since 2005. She graduated from Mt. Pulaski High School in Mt. Pulaski, Illinois, in 1988. Flach obtained a bachelor of science degree from Illinois State University in 1994; in 2007, Flach received her master of arts degree from Georgetown College. She is married to Brett Flach, they have three children, Bryce and Blain Flach and Taylor Flach Robb. Her parents are Lavaughn and Marty Clementz from Mt. Pulaski.

Eades is a seventh grade social studies teacher at King Middle School, where she has been working since 2001. She graduated from Scott County High School in 1982 and obtained her bachelor’s degree in 2001. She is married to Dan Eades has five children, Brittani, Brian and Joshua Stamper; Jessica Turner; and Travis Eades. Her parents are Alene and Roy McClain from Georgetown.

Cox is an 11th-grade English teacher at Mercer County Senior High School, where he has taught since 2013.

He graduated from Boyle County High School in 2003. Cox obtained his bachelor of art degree in 2007 from Western Kentucky University and received his master’s degree from University of the Cumberlands in 2013. Cox has also obtained his Rank I in educational leadership. He is married to Chelsea Cox. His parents are Tina and William Cox from Danville.