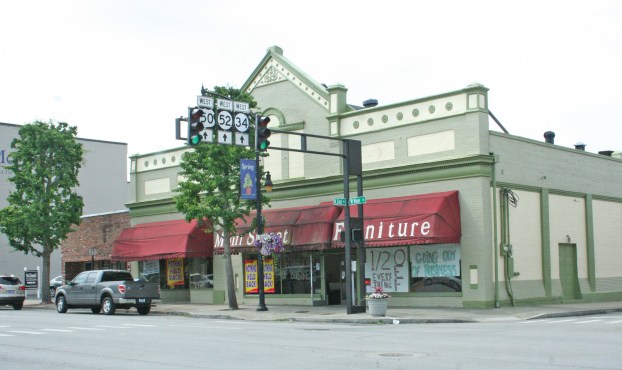 Kendra Peek/kendra.peek@amnews.com The Main Street Furniture Market is closing, marking the closing of the third furniture store in the same spot.

Building has served as three furniture stores over 43 years

Danville has had a furniture store on the corner of Main and First streets for about 43 years. But now Main Street Furniture Market, 201 W. Main St., will be closing its doors.

Main Street Furniture Market has been in operation for about five years.

Pat Kincaid first opened Kincaid Furniture at the prime downtown location in 1974, according to archives from The Advocate-Messenger. The shop remained open for 22 years, before closing in 1996. Then, building owners John Wilson and Billy Thompson of Wilson and Thompson Properties opened Main Street Furniture, which operated until it also closed in 2012.

“They did a going out of business sale. They liquidated all of their inventory and we started fresh with everything brand new,” she said. “My husband and I always wanted to own a business.”

The building is still owned by Wilson and Thompson properties.

Osborne said they were now closing due to illness in the family that requires her to be away a lot. She said she really appreciates all of the customers who have purchased from her over the years.

“There have been some longtime customers who have bought from here since it first became a furniture store,” she said.

There are half-priced sales going on now as they are attempting to liquidate everything, and she said it likely won’t be much longer until the store closes for good.

“We’re getting close to the end of things,” she said. Their lease ends on Nov. 1.

John Wilson, building owner, said the building is for sale or lease, and if the store closes before the November date, the space might be available before then. As of right now, they are looking to split up the building space. The company received approval from the Danville-Boyle County Planning and Zoning Commission on June 7 to separate the building into two properties.

Wilson said one space will face Main Street, and the second space, which was formerly a Buick garage, will face Second Street. However, the plan could change if someone wanted all 16,000 square feet, he added.

“We’ve had a lot of interest in the building,” he said. “It’s really the last two-way corner in downtown Danville … It’s a nice open space, the traffic flow is exceptional and it’s priced right for the space.

“I don’t think it will stay open for very long.”

Jody Lassiter, director of the Danville-Boyle County Economic Development Partnership, said he doesn’t think it will take long to find a new business for the building, either. 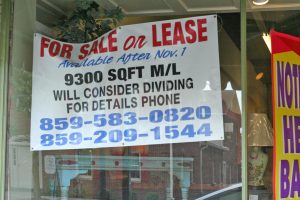 Kendra Peek/kendra.peek@amnews.com
The Main Street Furniture Market is closing, marking the closing of the third furniture store in the same spot.

“We have inquiries all the time looking for office and retail space, especially downtown,” he said, explaining that it depends on how much space a building has, how flexible the space can be and the cost of the space, which is likely one of the biggest factors for many.

Lassiter said his office is always saddened by the loss of a downtown business, especially Main Street Furniture Market, which is a “personal favorite” of he and his family.

The size of the space will make it very attractive, he said.

“A lot of creative uses are possible … it’s an exciting opportunity for downtown,” he said. “Hopefully we can find a good next use. We are working with the owners to make that happen.”

Parks committee accounts for $100K, adjourns for the summer

A special committee formed to oversee $100,000 in capital improvements to Millennium Park in Danville has finished meeting for now.... read more