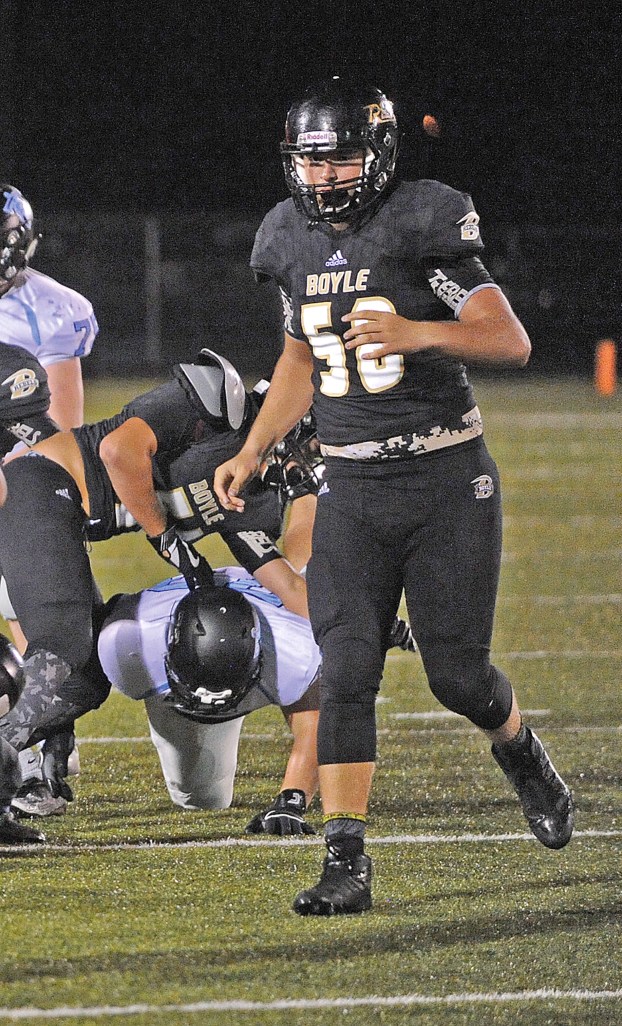 Will Bramel called his journey through college recruiting “crazy and exciting.”

Now that journey is over.

Bramel announced his choice to sign with Purdue University via Twitter on Wednesday. The standout senior offensive tackle at Boyle County was last year’s The Advocate-Messenger Lineman of the Year.

“It is a great feeling,” Bramel said. “Purdue has been at the top of my list most of the time. You evaluate everywhere you go, and after all our evaluating, Purdue was still the right fit for me.

“I hate to say it, but it is kind of a relief because it has been so crazy. I’ve been lucky enough to have my parents take me to all these schools, which hasn’t just taken my time but a lot of their time.”

He said not needed to travel and visit schools is the biggest relief he feels after making his decision.

His final list of schools included Ball State, Toledo, Memphis, Army and Air Force. There were plenty of things which separated the Boilermakers from those other programs.

“From the first time we went up there, as soon as I walked on campus, it felt like home,” he said. “The football program is only going in the right direction with coach (Jeff) Brohm. I love the coaching staff. It was a great family atmosphere, football’s only getting better and the academic programs are solid, too.”

Brohm is a Louisville native who played for the Cardinals who then played for six NFL teams over an eight year span. He left Western Kentucky to take over the Purdue program.

This process for Bramel happened quickly. He started getting letters during last football season, but his first offer came from Marshall in February.

“I had never talked to them before,” Bramel said. “If they could offer me a scholarship based off just seeing my film, I know this could be something special.

“A lot of times players get scouted during their sophomore year, but all this hit in February.”

Bramel has one more year of high school before he heads off to Big Ten football. He already knows what he wants to do before he graduates.

“I’d like to go there as a state champion. That’s the first goal,” he said. “It’s a humbling experience, but you can never be satisfied so I’m going to continue to work on every aspect of my game and try to become a better leader as a senior.”

“Purdue is an engineering school, but it also has a great business program as well,” Bramel said. “All the offers I had, they were all great academically. Any decision I made, I was going to be in the right spot in terms of academics.

“I looked into the business school (at Purdue) and you could tell it was just a great school.”

Bramel entered high school as a tight end, but he switched to his current role as a sophomore. In his two years on the line, the Rebels have rushed for 4,298 yards (179 yards per game) and have totaled 8,771 yards.

“Boyle County has made me the football player I am and develop me into the person I am,” Bramel said. “Coach (Chuck) Smith has done it at the college level and he’s been a great tool through the recruiting process for me, but also on the field. The whole coaching staff, everybody’s great at what they do. It helps me and everyone else out so much.”