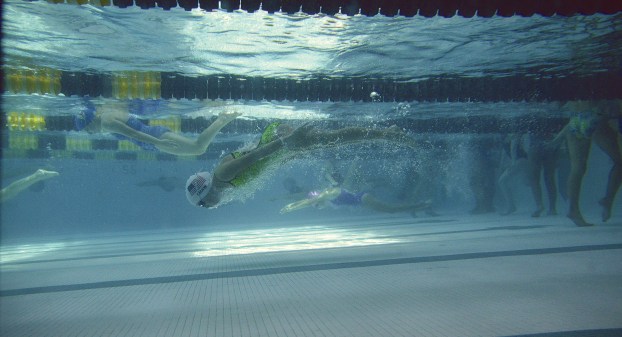 While Dean Brownley wasn’t taking credit for Michael Phelps, the longtime Centre College swimming coach said camps like the one he’s held for 14 years has helped keep American swimming at the top of the international ladder.

“We’re trying to teach kids the right way to do the strokes from an early age. On top of that, we’re also trying to teach them to have fun. … Teaching them to be athletic and have fun is very important.”

The Colonels welcomed in 48 swimmers to their technique camp this week at Boles Natatorium on campus. Those numbers are about average for a non-Olympic year for the camp, Brownley said.

“We’ve had as many as 80, that was an Olympic year,” Brownley said. “With having four to five coaches on deck, you’re looking at no more than 10 to 12 per coach. They’re able to get a little bit of individual attention.”

Brownley and his coaches try to go as in depth with the strokes and technique as possible, but it’s dependent upon the skill level of the swimmers. This year, he said the skill level is high enough that they can go more in depth.

But in depth or not, Brownley makes sure to focus on the fundamentals.

“I’m guilty as a coach that has coached soccer and swimming, and I’ve coached my kids in Little League, and one of the things as coaches sometimes we lose focus of is coaching fundamentals,” Brownley said. “Kids see SportsCenter and they just want to learn to do the amazing thing, they don’t want to learn the day-to-day boring play. We really try and emphasize the foundation of swimming.”

It wasn’t all about swimming at the camp, and that was by design. The campers played beach volleyball and kickball.

“One of our missions is to teach them how to play. As parents and coaches, we get so caught up in everything being structured, we forget to have fun,” Brownley said. “We’ll do things that have nothing to do with swimming but more being a kid.”

Plenty of things have changed with the camps since Brownley started holding them. He feels it’s vital for a coach to change with the generations of athletes and new trends in training.

“That goes for not just the camp but also for coaching,” Brownley said. “As the generations changed, they’ve been able to change with the kids. The kids have different needs now than they did 13, 14 years ago. They have different focal points.

“In some regard, we as adults and coaches get frustrated with how much time they spend on their cell phones and multitasking. You can look at that as a positive and a negative. The negative obviously is kids spend their time with their heads buried in the phone. But the positive, I see this next generation as kids who are going to be able to multitask better as adults than I ever could.”

For the fifth straight year, Boyle County had at least one representative at the Kentucky Softball Coaches Association East-West All-Star... read more