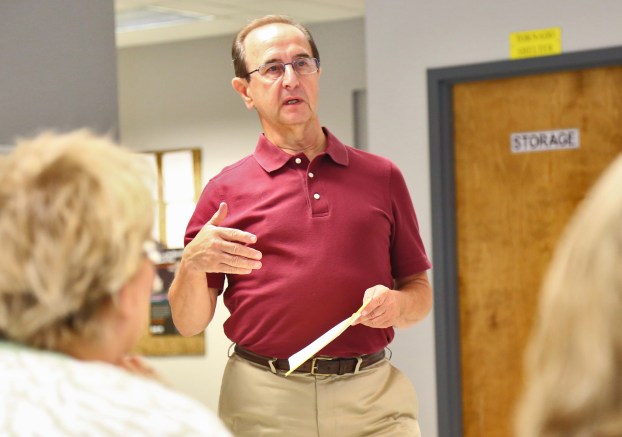 Boyle County is not lacking in jobs for those willing to work, but it is lacking in people capable of doing the jobs that are available, according to discussions at a workforce development community meeting Tuesday.

“Virtually every employer in town has job openings almost all the time,” said Steve Rhinehart, chair of the Workforce Development Committee run by the Chamber of Commerce and an administrative manager at Denyo. “The struggle is finding people who have the skills that match whatever the workplace requires for the job.”

Rhinehart told the about 20 people who attended the meeting that he hears “over and over again” from human resources people that potential hires are lacking “soft skills.”

Many in Boyle’s workforce “don’t know how or don’t understand the importance of filling out an application correctly; or having a resumé that presents their skills accurately,” Rhinehart said. They also “don’t know how or don’t make the effort to present themselves well when they show up for an interview; or once they’re hired, don’t know how to work in a team environment with other people or communicate effectively with coworkers or supervision.”

The Workforce Development Committee looked at this problem and decided it was one that could be tackled.

“We felt like that was something that maybe we could address as a community, because they’re skills that can be learned,” he said. “… In my experience, (people) don’t understand the importance of why it needs to happen or they’ve just never had anybody mentor or tutor or coach them on how to do those things or why it’s important.”

Tuesday’s meeting was the second workforce development community meeting organized by the Chamber of Commerce; the first occurred in February.

Chamber Director Paula Fowler said the discussion at the first meeting led to a big list of needs for improving Boyle County’s workforce.

“The committee met after that and really looked down through this … and realized there’s no way, with all of that committee being volunteers, that we could bite off everything that showed up,” Fowler said.

The committee prioritized the list of issues that had been generated by six small groups at the first meeting.

“We came down to two areas that we thought we should tackle first,” she said.

One of those is trying to get all “community resources” in Boyle County listed through the 211 phone service, supported by the United Way.

The other is the soft skills issue, which the committee thinks could be addressed through “pre-employment training,” Fowler said.

By the end of the meeting, the group had agreed to work on gathering data on the need for better transportation options, so that low-income people can make it to work; and to further pinpoint the size and needs of different unemployed or underemployed populations in Boyle County.

Rhinehart said the committee has been looking for partners to work with on developing a pre-employment training program.

The rough idea at this point is to team up with agencies that can provide training and employers that can provide jobs; and figure out a way that the employers would be comfortable guaranteeing a certain number of jobs to a pool of people who complete the training, Rhinehart explained.

Bluegrass Community and Technical College already has a “Workforce Solutions” program set up this way that could work, Rhinehart said. Goodwill Industries and the Boyle County Public Library were identified as other agencies capable of training workers.

Rhinehart said the committee has also been talking with the Central Kentucky Regional Jobs Training Consortium, which includes “about 20 primarily manufacturing employers in Boyle, Mercer, Lincoln and Garrard counties, who collaboratively and cooperatively work on common trainings and also work a lot with the BCTC Workforce Solutions folks.”

Rhinehart said the committee has the consortium’s support, and members of the consortium also helped identify “obstacles” that could get in the way of employers participating. Some employers have company policies that could present a challenge, he explained.

And the committee has also talked with the Central Kentucky chapter of the Society for Human Resources Management, Rhinehart said.

“These are the folks that on a day-to-day basis are out there interviewing folks and trying to fill positions, so they know first-hand the issues we’re trying to address,” he said. “So we’ve laid that background work with those agencies. The next step is moving on to trying to identify exactly what kind of curriculum might be involved, timing. … this is not something we can do (quickly). There are a lot of issues to it.”

Not everyone who needs additional training to become easily employable is at the same skill level, noted Gail Jackson, who works at BCTC and with the Shepherd’s House intensive outpatient treatment program for recently released inmates.

Jackson said she is “shocked on a daily basis” by people who need help learning “basic skills” such as multiplication. Such people, who may have a fourth-grade skill level, to a 12th-grade skill level cannot be accomplished in a few months of training, she said.

“We need to really be clear on what’s the goal for various levels — what are the skills we’re working toward?” she said. “… These people need a whole lot of home training, if you would, that your kids got in middle school. Those are the skills that they need for these entry-level, un-fillable jobs.”

Stephanie Blevins, executive director of the Heart of Kentucky United Way, said poverty is a big “foundational” issue that can get in the way of people holding down a job even if they are trained to have soft skills.

“We can teach them the soft skills, but if they still can’t afford to go to work because they’d lose their childcare benefits, or if they still can’t get to work, it doesn’t matter what kind of soft skills they have,” Blevins said. “Until we really look at what the foundational issues are, it’s not going to change, it’s just going to continue and gradually, it’s just going to build and build. I think we’ve got to look at the framework at the bottom.”

Rhinehart said he thinks the initial target group could be “underemployed” people who are already close to qualifying for a good job but have something holding them back.

“They’re already working, they’ve solved the transportation issue, they’re out there, but they’re working in — not demeaning the jobs — fast food, or housekeeper at a hotel,” he said. “They have the skills perhaps to do more than that if they can get over that initial hurdle of how to present themselves and knowing how to access those other opportunities.”

Rhinehart said there are people who would need much more training before they could land a good job.

“The early, low-hanging fruit, if you will, are those folks that are out there, they’re in the workforce, but they’re underemployed,” he said. “With a little bit of assistance and coaching and additional training, (they) could become more fully employed, so that they’re more self-sufficient. I think that’s the initial group that I’m seeing to focus on. And in the mean time, we continue to work on a lot of these other issues.”

Kathy Miles, coordinator for the Boyle County Agency for Substance Abuse Policy, said she thinks local school systems unfairly receive too much blame for children who grow up and are not fully prepared to hold a job.

“I think a lot of these issues have to do with what is happening at home. It’s happening in families,” she said. “It strikes me that organizational skills — ability to organize your thoughts and your time — is something that a whole lot of kids (struggle with).”

Miles said substance abuse problems in the community are not helping. Many kids don’t have a “typical day” — they don’t know what to expect from day to day at home.

“That’s something we know about child development — they need consistency and predictability, and the most they get is at school,” she said. “… Chaos is their norm. So why would we think that going to a job and having it be predictable and stable feels good? It doesn’t. They’re used to the other. I feel for the schools so much because they can’t do anything about that.”

Fowler said she is the parent of a teacher and has seen what teachers have to deal with.

“What teachers are being asked to do is almost unforgivable, it really is, because they’re there trying to instruct and impart knowledge, and they can barely do that with what they’re dealing with with behavioral issues,” she said. “… It’s become, ‘how do I control the activity of five or six students so I can teach 24? It’s a challenge that I think is a sad challenge — that teachers are expected to do all this.

“And then they’re turned around and mandates are put on them that you have to teach this and you have so many minutes to do it, and if you don’t do this you might not have your job next year. I just think that that’s a whole issue that we need to be looking at. Because if the parenting isn’t bringing those children up ready for school, why do we expect teachers, who are taught to impart knowledge, to all of a sudden learn how to deal with major behavioral issues and other challenges?”

Fowler said another issue is “kids are coming to school hungry,” and they can’t learn well when they’re hungry.

“Schools and teachers are being asked to take on this burden almost single-handedly, when it’s burden that’s way beyond their capability and their time to handle,” she said. “I don’t know what the answer is, I really don’t, but it’s a challenge.” 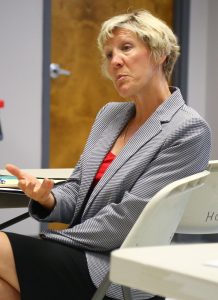 Ben Kleppinger/ben.kleppinger@amnews.com
Gail Jackson talks about the level of training some people need in order to qualify for good jobs during Tuesday’s community meeting on workforce development. 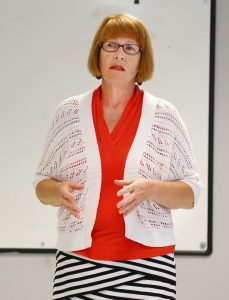