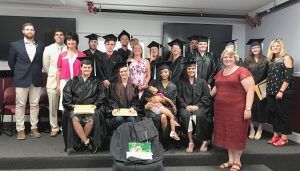 Mercer Adult Education graduates
Pictured are the 2017 graduates of Mercer County Adult Education who earned their general education diplomas (GEDs). State Rep. Kim King, third from left, was in attendance and gave the commencement address. The chair in the front with a cap and gown was in memory of a Rebecca Davis, a graduate who died the day before graduation. Her friends and family were in attendance to accept her diploma.
Mercer County Adult Education had a total of 20 graduates, with 13 present for the ceremony. Five of the graduates will be attending college in the fall at Bluegrass Community and Technical College, Campbellsville University and the University of Louisville.

Seven local VFW organizations teamed up to raise the donation. They include Post 6935 in Harrodsburg; Posts 4075 and 9235 and their auxiliaries in Frankfort; Post 10281 and its auxiliary in Vine Grove; Posts 1181 and 8639 in Louisville and Post 1179 in Shelbyville.

“Some of the worst things we see in law enforcement involves children,” said Payne. “There’s nothing like seeing the smile on a child’s face when you show up for something bad and somehow you make it just a little bit better by handing them a teddy bear. It’s amazing. It makes the best out of a bad situation for them, but more importantly, it establishes a bond of trust right then and there between that child and this uniform. From that point forward, they know that if they are ever in need of a friend or ally, they can find someone that looks like me and they’ll find a friend or ally.”

According to Duffy, the project fits perfectly with the VFW’s goal of being a strategic asset to the community and supporting mental health awareness. “It touches the lives of some very young children during some very traumatic times and gives them a little bit of extra assurance that things are going to be all right,” he said. “The VFW has a long-standing support for law enforcement and we’re very proud of the efforts put forth by the various VFW posts and auxiliaries to support this program,” he added.

KSP has been distributing the bears since December of 1989 when Kentucky First Lady Martha Wilkinson hosted a gala fundraiser that raised the needed funds to purchase 2,000 Trooper Teddy bears. The program ran out of funding in early 2000 until recently, when KSP was able to utilize asset forfeiture funds from criminal drug activity to purchase more bears. The bears and funding are in short supply again. The agency plans to sustain the program in the future by offering the bears for sale to the public for $20 each. Until then, information about a donation to the program can be obtained by calling the KSP Public Affairs Branch at (502) 782-1780 or visiting kentuckystatepolice.org/news.html. 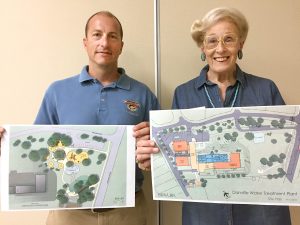 Danville City Engineer Earl Coffey presented landscape plans for the grounds of the city’s new water treatment plant at the June meeting of the Garden Club of Danville. Plans call for play areas, a splash pad, scattered benches and picnic tables. A walking path around the perimeter of the park will include an interpretive space for teaching and possibly a wetland area and rain garden. Coffey holds the new design, while club member Joyce Eulner displays the site plan before new landscaping.