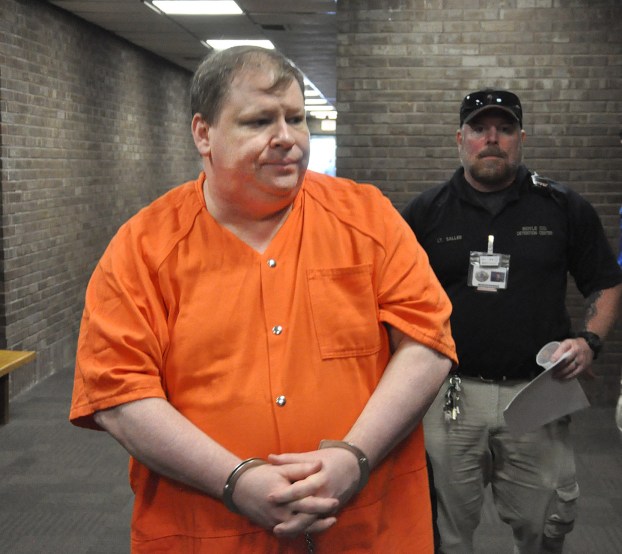 Officials: Evidence was ‘overwhelming’ against Keith

Closing the “tens of boxes” in the case against Kenneth Allen Keith was not a hard thing for Danville Police Det. Kevin Peel, lead detective in the case, and officers with the Danville Police Department who had exhausted the leads before arresting Keith on Oct. 9, 2013, less than a month after the murders of Mike and Angela Hockensmith and Dan Smith in 2013.

“No matter what the tip or the lead is, you have to follow it … We can’t pick and choose and say ‘We’re going to look at these, but that’s nothing.’ That could very well be it,” Peel said. “People need to see that what we do with any investigation is that we be as thorough as we can be. Especially something of this magnitude, where a man’s life was on the line. Three had already lost theirs, but whoever we were going to arrest was going to be facing the death penalty. We don’t want to mess up with something like that.”

On Sept. 20, 2013, law enforcement officers were called to the ABC Gold Games and More Pawn Shop at the intersection of South Fourth Street, after a 9-year-old boy called 9-1-1.

When law enforcement arrived, they found the boy, the Hockensmiths’ son, and his 14-month-old sister unharmed, along with the bodies of his parents, Mike and Angela Hockensmith, owners of the business, and Dan Smith, a gold buyer from Richmond who police have said did regular business with the couple and others in the state.

That phone call was a “catalyst,” Peel said.

“The time frame he set up by making that call as quickly as he did gave us a short window of time that we knew it had to have happened in. Later on, we would use that window to attack the window that (Keith) would try to use,” Peek said.

Officers went to work that day following an “overwhelming” number of leads. Peel said in the beginning, a game plan was created on how to investigate the murders, which included casting a “wide net” for evidence.

“You don’t really know the significance of what everything is that you’re looking at at that point — that’s what we did that day on scene — not just physical evidence, but we were doing interviews. We were getting information on the victims. We were trying to gather as much information as we could, so that we could then start with a tentative game plan, knowing that it’s likely going to change,” Peel said.

Police Chief Tony Gray said the assistance from outside agencies made a big impact those first few days. That included Alcohol, Tobacco and Firearms officers, Kentucky State Police troopers, the Boyle County Sheriff’s Office and others.

“That collaborative effort, I think, was a huge thing. You don’t realize at the time, but it turned out to be a huge asset for us,” Gray said.

Although he’s listed as the lead on the case, Peel is quick to say he’s just the one that signed the papers, and typed about “what a lot of great people did.”

Besides himself, Det. A.J. Mullins, Det. Lisa Graff, and Det. Robert Ladd, who is no longer at the Danville Police Department, had major parts in the investigation.

In this case, phone calls continued to be important. The phone call police received from Michigan pastor and friend of Keith’s, Tracey Herald, on Sept. 24, 2013, helped them begin to look more closely at the Burnside pastor.

“Once Pastor (Tracey) Herald from Michigan called in and started talking to us, it all started falling into place,” Peel said. “We’ve always said, we would have gotten to (Keith), just because of his relationship with the Hockensmiths as the former owner of the business. It would have taken longer, which maybe would have given him time to destroy evidence that we recovered … Pastor Herald’s call was perfectly timed.

“Over that two weeks is when we really focused our attention on (Keith). … We started to learn more about how the business had dissolved here when he was involved. We started to learn that he likely held a great deal of anger and aggression towards the Hockensmiths.”

That first tip about Keith started investigators on a narrowing path to Keith, as all leads began to point the same way.

“The evidence that came to be before we served the search warrants, before we got the arrest warrants on him, it was compelling,” Peel said. “Obviously it was enough for the courts to issue multiple search warrants and arrest warrants for him. The fruits of the warrants, particularly in Pulaski county, were what was just overwhelming. There was direct physical evidence that tied him to the scene.”

The “crucial” evidence found with the search warrants included two spent shell casings forensically matched to casings at the scene of the murders; a yellow receipt from Dan Smith’s receipt book; and searches on a computer for how to make a homemade silencer, which police believe was used in the murders.

“From the time the investigation focused on (Keith), those two weeks before we got the search warrants, what I remember always telling the guys is that ‘We need to operate under the assumption that we’re not going to get any more evidence than what we have,” Peel said. “We can’t build this case off of what we hope to get from search warrants.”

After Keith’s arrest, his case faced delays. In June 2014, his attorney, Mark Stanziano, was shot and killed outside his Somerset office. His wife, Bethany Stanziano, took over the case, but eventually withdrew. Sandra E. Downs of the State Department for Public Advocacy, took over the case before it was assigned to Samuel Cox and Teresa Whitaker, two public defenders from Lexington with experience handing capital punishment cases.

“That was a huge part of the delay,” Peel said. “We’ve had a lot of hearings since the end of last year. That’s the kind of stuff that would have started happening around the time Mr. Stanziano was killed … Every time, the new defense team would have to start from day one.”

There were suppression hearings in the case: one to suppress the testimony of the man who called to tip police off — Tracy Herald, a friend of Keith’s who was also a pastor in Michigan, in whom Keith confided after the murders. Another to suppress the evidence that was found after the search warrants were served. Another to suppress witness statements from the day of the murders. And a request was made to move the trial out of Boyle County. That request and all the motions for suppression were denied.

Jury selections in Keith’s trial were scheduled to begin Aug. 10. But on May 26, Keith entered a guilty plea after being added to the docket the night before, according to the Boyle County Circuit Clerk’s Office.

Peel said he believes the evidence spoke in this case.

“I think, when it really came down to it, (the attorneys) had had a chance a to review everything. In the totality of it all, they felt it was the best decision to make,” he said. “The evidence proves beyond a doubt that he did it.”

At the time of the guilty plea, Commonwealth’s Attorney Richie Bottoms said he was satisfied with the result.

“Obviously, for the family’s sake, I’m satisfied he’s finally admitted his guilt and agreed to plead guilty,” Bottoms said at the time. “We’re glad the family can finally have some closure. I’m thankful for all the work that law enforcement has done in this case.”

Bottoms said that he had discussed the potential of such a plea with the families, because that would mean the death penalty would no longer be an option.

The plea also resulted in $65,000 being turned over to the family of Dan Smith — money that had been taken in the course of the robbery, Bottoms said.

Keith is now lodged in the Roederer Correctional Complex in LaGrange, where he is serving a life sentence without the possibility of parole.

He is facing two wrongful death suits from the families of Mike and Angela Hockensmith. Those cases had been held in abeyance until the criminal case was resolved. 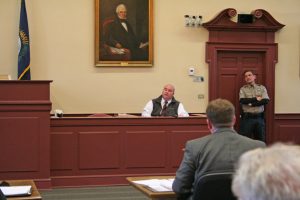 File photo/Kendra Peek/kendra.peek@amnews.com
A file photo from December 2016 of Det. Kevin Peel as he answered questions regarding the affidavit used in obtaining search warrants on the home, business, church and two personal vehicles belonging to Kenneth Allen Keith prior to his arrest.

On the wild side