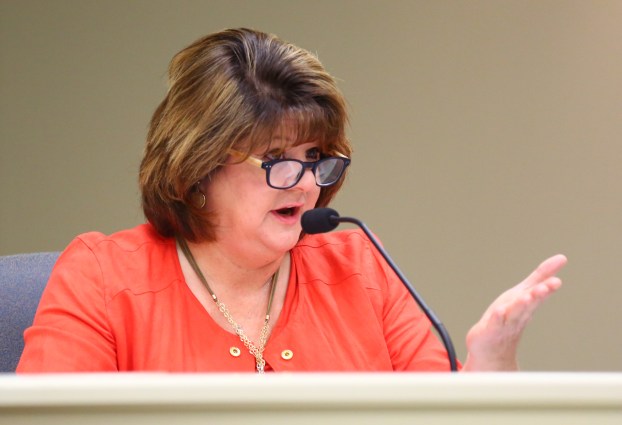 Danville Architectural Heritage Board considers whether ‘not appropriate’ is appropriate

Multiple residents stood before the Danville Architectural Heritage Board Wednesday morning to protest the use of the phrase “not appropriate” in proposed design guidelines, which are the draft product of a months-long effort to update the rules downtown property owners follow when they’re maintaining or improving historic buildings.

The guidelines use the phrase “not appropriate” repeatedly to designate when particular materials or construction would not be recommended — such as “chemical applications that alter the color or texture of historic surfaces” or “cutting new openings into the primary façade or highly-visible secondary elevations.” Both of those activities are deemed “not appropriate” in the universal guidelines chapter of the seven-chapter guidelines. The phrases “is not appropriate” and “are not appropriate” appear 54 times in that one chapter, along with one instance of “not appropriate” by itself, concerning placement of large solar panels in highly visible areas.

AHB members contended the use of “not appropriate” was a step better than the current guidelines, which use the phrase “is prohibited” frequently.

But for several members of the public who want to make sure the AHB is free to permit unique and beneficial designs that may not totally mesh with the guidelines, the change wasn’t enough. 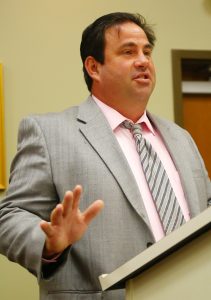 Ben Kleppinger/ben.kleppinger@amnews.com Local attorney Patrick McClure speaks about language changes he would like to see in the draft design guidelines that would dictate how work could be done to buildings in Danville’s historic overlay district.

“We all want these buildings to stand; we want them to last; we want people to occupy them, because vacant spaces fall into disrepair,” local attorney Patrick McClure said. “To do that, we’re going to have to give some of these folks some leeway to do some things … I don’t think it serves the purpose that we all want — for these buildings to be viable, for businesspeople to want to use the buildings — to make these rules so strict that they can’t use them for the purpose that they need to use them.

“And those purposes have changed, these buildings have changed many, many times over the last 125 years, and it’s allowed them to stay useful. And I would like to see us give them the opportunity to continue to do that for another 125 years.”

McClure said he doesn’t think changing from “prohibited” to “not appropriate” accomplishes the goal.

“Believe it or not, it really does,” AHB member Mary Girard said.

Girard acknowledged that in the past, the AHB was hamstrung by rules “and that’s why there were so many ‘no’s’” to what downtown business owners wanted to do, even when everyone liked the ideas.

“As long as you’ve got that wiggle room in those words … all of a sudden we’ve got space,” she said.

“With the new language, we can make that judgment call,” she said. “We couldn’t do that before.”

McClure said he feels the change is a “difference,” but “I don’t think there’s a distinction.”

Mary Robin Spoonamore, owner of Jane Barleycorn’s Market and Bar on South Fourth Street, said she agrees “not appropriate” doesn’t go far enough and criticized the idea that “‘inappropriate’ is our gateway to freedom.” 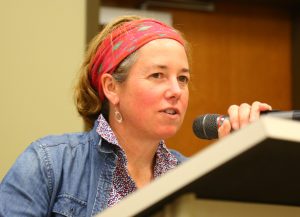 “I do hope we can find better contextual language, (so) that if there are owners of buildings and people that want to make investments for the overall good of the social and commercial environment downtown, that they aren’t kind of beating their head on an anvil trying to get it through,” she said. “Because then all the energy is just sparks going off. And that energy could be put downtown.”

Kate Snyder, associate director of the Community Arts Center, put the problem into a different perspective.

Girard said that’s the AHB’s intent — that ‘not appropriate’ means something isn’t encouraged, but a property owner could still bring an idea to the AHB and it could approve anyway.

“Does everybody know that?” Snyder said. The current AHB may understand the language to work that way, but “does the next board get trained on that secret code?” she asked.

“It’s not a secret code; it’s discretion,” Wagner said. “I think it gives us discretion.” 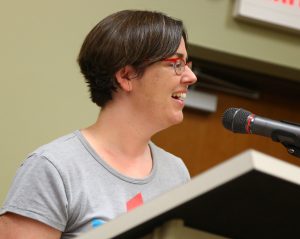 Ben Kleppinger/ben.kleppinger@amnews.com Kate Snyder, associate director at the Community Arts Center, tells members of the Architectural Heritage Board that if she told her kids something was “not appropriate,” that would mean “no.”

“So you feel like any people sitting in your position, not just you specifically, would have that same understanding?” Snyder said, adding she hopes “all of this work, that these sort of understandings that the community comes to aren’t lost when new people come into the (AHB) seats.”

McClure wasn’t buying the “not appropriate” argument, either.

“If I tell somebody it’s ‘not appropriate,’ that means no. It’s a nice way of saying no, but it still means no,” McClure said. “… I understand that you all say it gives you the wiggle room, but you can’t predict what the next board (will do).”

McClure said eventually, as AHB members come and go, “somebody is going to read that and see, ‘no.’ And I think that has to be addressed.”

“If I’m the lawyer reading it, that’s what I’m going to see.”

Snyder and McClure both said they would like to see “not appropriate” changed to “not encouraged.”

Wagner said it could depend on what each individual item is — some things may truly be “inappropriate,” while others could simply be “not encouraged.”

“Would it be better for you all if we went back and said ‘absolutely no’ on some of these things?” Wagner asked.

“If there were some that really is ‘no,’” Snyder said. “I’m not saying you have to change every ‘not appropriate’ to ‘not encouraged.’” 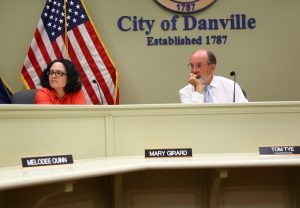 As drafting of the guidelines wraps up, comments made to the AHB, along with input to the design guidelines’ Facebook page and any other input gathered by the AHB and Code Enforcement Director Bridgette Lester, will all be provided to Alan Higgins with Cultural Resource Analysts, the company creating the draft guidelines.

A final product from CRA is due by the end of June in order for the city to receive grant funding for part of the cost. But that won’t be the end of the process, Lester said. The guidelines can be further modified, and they will still have to be passed by the Planning & Zoning Commission and the Danville City Commission before they would take effect.

“It’s great to have input on something like this. It feels like the community will have written it,” Tye said. “I think we all agree we want to move onward and upward and do the best thing.”

“I’m pleased to see that we’re arguing over vocabulary instead of big ideas,” Girard said. “That’s a good sign.”

The Danville-Boyle County Planning and Zoning offices could be open five days a week as of Oct. 1, according to... read more