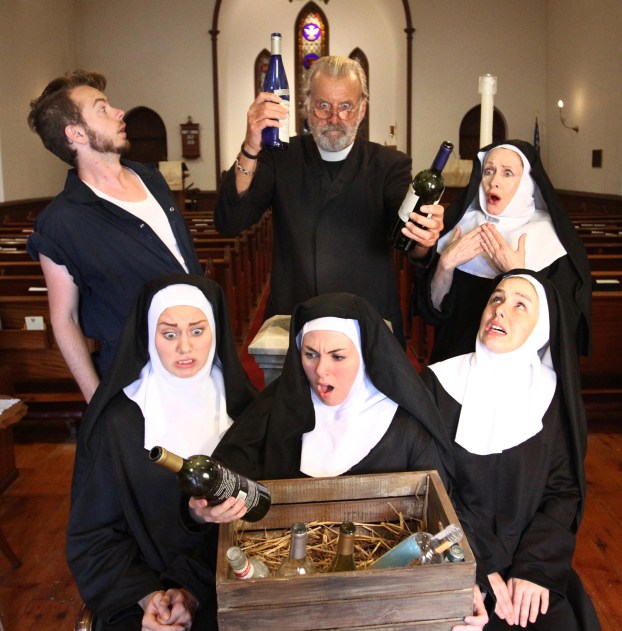 Season Under the Stars Continues with Laugh-out-loud Comedy!

Two nuns at the Sisters of Perpetual Sewing have been secretly making wine to keep the convent’s doors open, but Paul and Sally, reporters and former fiancees, are hot on their trail. They go undercover as a nun and priest, but their presence, combined with the addition of a new nun, spurs paranoia throughout the convent that spies have been sent from Rome to shut them down. Wine and secrets are inevitably spilled as everyone tries to preserve the convent and reconnect with lost loves.

“Drinking Habits,” which was written by Tom Smith, opens on June 27 and runs through July 8.  Hammond stars as the tee-totaling Mother Superior of the Convent while Mastin plays Father Chenille, a priest and former amateur magician.

“Pat and Eben have been coming to the Playhouse for many, many years,” says Robby Henson, artistic director and son of Pioneer Playhouse founder, Colonel Eben C. Henson.  “They have lots of fans, and I know patrons are going to get a great big kick out of seeing them in this show.”

Plays are performed 8:30 p.m. Tuesdays through Saturdays. A home-cooked dinner featuring hickory-smoked BBQ pulled pork or chicken, and farm-fresh sides, is served at 7:30 pm each evening before the show. (Vegetarian option is available if ordered 24 hours in advance.) A bar serving wine, beer, and mixed drinks will be open for those 21 and over. Reservations are recommended for the show, required for dinner. (Dinner & Show: $32; Show Only: $18.)

Pioneer Playhouse is located at 840 Stanford Road in Danville. Shows are held outside in a historic amphitheater but moved indoors in case of rain or extreme heat. For more information and for reservations, please call the box office at 859-236-2747 (local) or 866-KYPLAYS (toll-free), or go online at www.pioneerplayhouse.com. 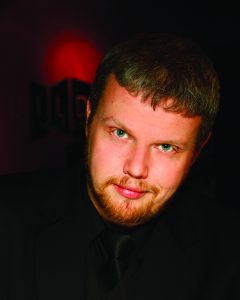 Eric Seale is pleased to join Pioneer Playhouse for the first time as director for “Drinking Habits.” for the first time. He is the current Artistic Managing Director of Central Kentucky Theatre in Springfield, KY and the former Artistic Director of the Actors Guild of Lexington. He has directed and produced numerous shows for various theatres across the state including “The Elaborate Entrance of Chad Diety,” “True West,” and “The Complete Works of William Shakespeare (Abridged).” Seale serves as the executive producer for the UK Women Writers Conference playwrighting contest.

Father Chenille (Eben French Mastin) confronts Mother Superior (Patricia Hammond) with evidence that the nuns at the Sisters of Perpetual Sewing have been making wine without permission.

Mother Superior (Patricia Hammond) is not happy when she discovers two reporters (Liam McDermott as Paul; Giuliana Carr as Sally) snooping around her convent.
You Might Like