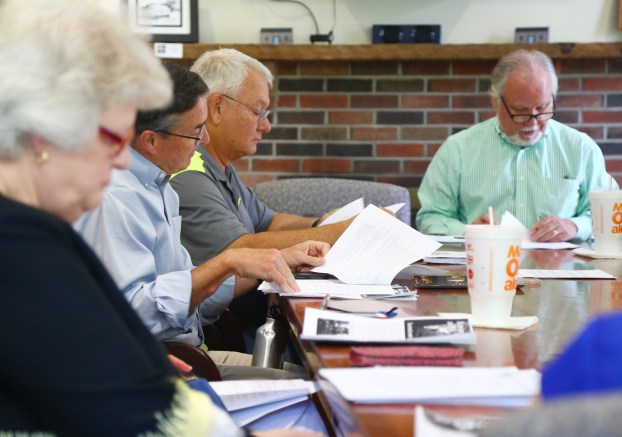 Ben Kleppinger/ben.kleppinger@amnews.com Members of the Danville-Boyle County Economic Development Partnership board review documents during a meeting Wednesday. The EDP released its first “project funnel report” for public consumption at the meeting.

The Danville-Boyle County Economic Development Partnership released Wednesday its first ever “project funnel report,” documenting for public consumption 59 projects the agency has been involved with.

Of the 59 projects — many of which are masked with aliases such as “Project Queen,” “Project Rio,” and “Project Abraham” — four are “in progress,” two are “complete” and nine have been lost to “attrition.” The other 44 are in various preliminary stages.

According to the report, the two completed projects are:

• a less-than-$100,000 project from Mindsight Behavioral Health Specialty Group that created between 11 and 25 jobs.

The four “in progress” projects listed in the report are:

• an announced $9.9 million expansion at Wilderness Trail Distillery that is anticipated to add 10 new jobs;

• the Cattleman’s Roadhouse restaurant now under construction on the south end of the Danville Bypass, estimated to be a $100,000-$500,000 investment and create 51-100 jobs; and

• “Project Enterprise,” a masked project that began on March 30 and has no publicly released investment level or jobs estimate.

There are nine projects tagged with an “A” for attrition. Lassiter said those are projects where a business made an inquiry and work was started to find out if Danville/Boyle County would be a good fit, but it didn’t work out.

Perhaps the most notable of the attrition projects is a project from the Kentucky Cabinet for Economic Development that was initiated on Feb. 14. The reason for attrition is listed as “company advised on (May 8) that Danville labor market and cost not competitive with other KY sites.”

Lassiter said the company looking at Danville would have needed to hire about 500 people. Danville’s labor market was “insufficient” for that amount of workers, he said.

“We often deal with that because our population base is not extensive, even when you consider that we’re reaching a larger labor market that includes 13 counties,” Lassiter said, adding that metropolitan areas offer big companies a “deeper bench” of people to ensure that they can hire everyone they need to.

Other attrition projects include one where an existing industry was interested in the Caterpillar facility in the Boyle County Industrial Park, but the plant was already under a purchase contract, and:

• Bluegrass Pizza & Pub — “Business no longer for sale per owner.”

• Investor inquiry — “Prospect did not proceed with purchase of property; possibly interested in subdivision of tract to develop vacant acreage.”

Open projects that are not yet in progress fall into three “development stages” — “inquiry,” “qualified” or “due diligence,” with each being closer to an announcement of a project than the last.

Lassiter said after an initial inquiry, a project moves to the “qualified” stage if specific sites or buildings are located that could potentially work for the business.

The due diligence stage “can be a lengthy phase, where they’re determining whether that building or site is appropriate,” he said. Due diligence may also involve narrowing multiple site options down.

One open project in the due diligence phase involves the commercial property at the corner of Hustonville Road and the Danville Bypass, where King Buffet used to stand.

Lassiter said the chain company interested in the property usually builds its facilities on 2.5 acres of land, but the King Buffet property is a little less than 2 acres. And so, Lassiter is working with the company on the question of “can this work or not?”

That question is further complicated by the fact that a high pressure gas line runs underneath the property, potentially restricting where construction could take place. That gas line is also complicating the desire of McDonald’s to rebuild its nearby location along Jane Trail. McDonald’s and the old King Buffet property were both on the agenda for this month’s Board of Adjustments meeting, but the King Buffet property discussion was tabled.

“We’re waiting to see what happens with the McDonald’s scenario up the hill to determine whether this client could pursue a similar setback variance for the gas line,” Lassiter said. “It’s virtually the same issue. We need to know if they could have some additional room for the construction of their building, which is pretty much set for their chain.”

Other open projects in the due diligence phase include:

• an existing industry with plans to expand that would involve a $6 million-$10 million investment and create an estimated 26-50 jobs;

• “Project Newton,” an estimated $11 million-$25 million investment from a new industry in Danville that would create 51-100 jobs;

• the possible addition of a Buffalo Wings & Rings restaurant location in Danville;

• a “bed & breakfast” project in Perryville that would involve an investment of less than $100,000 and create one to 10 jobs;

• a “bakery” project in Perryville that would involve an investment of less than $100,000 and create one to 10 jobs;

Lassiter said the funnel report is designed to give the public “a snapshot of what’s happening in my world.” He said the term “funnel” is used because of the nature of economic development — lots of projects come in the top as inquiries are made, but only some emerge out the bottom as completed.

“I know a lot of people want to know, ‘what is Jody Lassiter doing?’” Lassiter said. “This shows precisely what I’m doing.”

He noted the publicly released report is a “slender version” of a more detailed spreadsheet he uses to track specifics on all the projects underway.

“What I like about this is it creates kind of an all-in-one document that is easily pared down for public consumption, for people to see … there’s a lot of stuff going on,” Lassiter said. “We are probably seeing the most project activity ever … this just gives it a little bit better documentation for the public to see.”

About 24 middle- and high-school educators from around Kentucky gathered at Danville High School for the four-day Arts-Literacy Integration Academy... read more