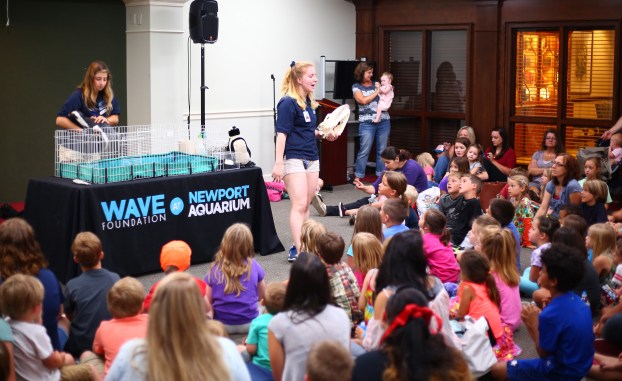 Ben Kleppinger/ben.kleppinger@amnews.com
Devin Magner, center, shows the crowd of more than 200 a predator skull replica while Savannah Weber, back left, brings out Paula the penguin.

The Boyle County Public Library was standing room only Friday morning for a visit from an African penguin. Paula, a 10-year-old penguin, was brought from the Newport Aquarium for a special event at the library.

Devin Magner, an educator with the aquarium’s Wave Foundation, taught kids how of the 18 penguin species in the world, only four live in cold climates. Most of the rest of the species actually live in Australia, with others living in Africa and South America.

Wagner also got some laughs when she explained how penguins poop every 15 minutes, and told the crowd they could help protect critically endangered species like Paula by bringing plastic shopping bags back to grocery stores for recycling or opting for reusable bags instead.

Plastic bags that get loose in the ocean look like jellyfish to penguins, who eat them. Then, the plastic bags sit in the penguins’ stomachs and make them feel full, causing them not to eat, she explained.

Paula is one of three sibling penguins who were named after the three original judges on American Idol — Paula Abdul, Simon Cowell and Randy Jackson.

Order prints of these photos here.

Former Danville officer among those indicted in Boyle County