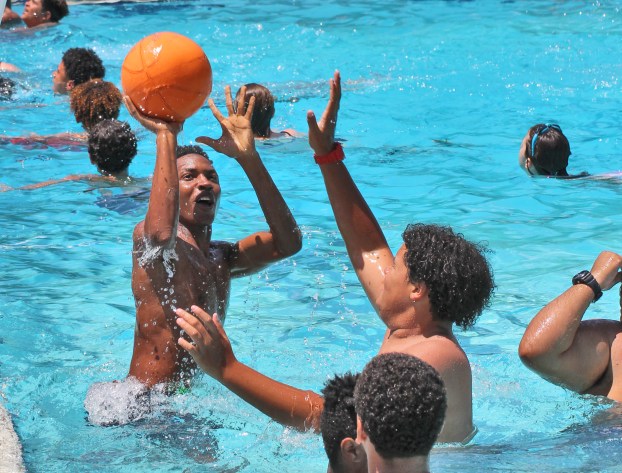 File photo
Kids play in the Bunny Davis pool in 2016.

More than 2,357 people have visited the Bunny Davis pool since it opened on May 27, bringing in more than $10,000 between admission, concessions and memberships. That’s down from more than $13,000 this time last year.

“Pool (admission) is right where we were last year at this time,” said John Drake, Parks and Recreation director. “We’ve had a couple cloudy days, a couple close early days, but not many.”

The concession stands at the Millennium Park, open for nightly games and weekend tournaments, have brought in $35,089, about the same as last year’s $34,835.76.

Specifically, during tournaments since May 20, the concessions brought in $15,110.75 over nine days of softball, three days of baseball and one tournament for the Danville Christian Academy, all of which ran over more than 10 days total at the park. Some weekends, both the baseball and softball complexes were being used at once. The weather and holidays have impacted some of the tournaments being held.

Board members also heard about the playground program, which has served children for three weeks so far. The first week, there were 55-74 children, the second week there were 40-52 children and the third week there were 32-36 kids. The last two weeks, there have been camps at the local schools, which administrative assistant Amber Sharzter said likely accounted for the decrease in numbers.

The children have been visiting the movies, various pools, Party On Air and Millennium Park; and participating in tennis clinics.

“There hasn’t been a hiccup so far,” Sharzter said.

Drake said the program is giving children who might not otherwise get the opportunity the chance to play tennis.

• Talked about some complaints that had come into City Commissioner Rick Serres about bleachers not being clean enough. Serres had been sent a photo of a bleacher that had leaves, peanut shells and sunflower seed shells on it. Board members said it was a sign that the park was being used.

• Approved $2,308.59 to cover the cost of putting in cameras and wireless internet near the baseball fields at Millennium Park.

• Heard from Drake that two memorial gardens had been completed in the park and another memorial bench was going to be placed near the dog park.

• Approved a plan to pay $549 to sponsor spirit shirts through WHIR, which will be handed out before the Danville vs. Boyle game football game.

Danville Architectural Heritage Board considers whether ‘not appropriate’ is appropriate

Multiple residents stood before the Danville Architectural Heritage Board Wednesday morning to protest the use of the phrase “not appropriate”... read more