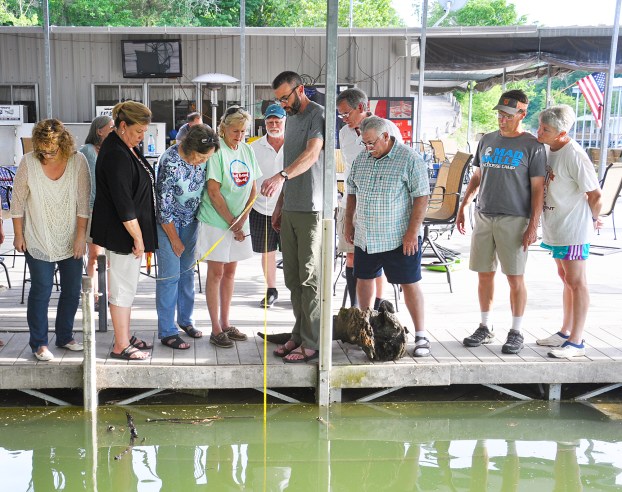 Herrington Lake is the site for the new scientific monitoring program, developed by Watershed Watch and the Kentucky Division of Water, that will depend on local volunteers to help assess lake water quality. Their work is could help improve the efficiency of a NASA satellite in detecting water quality issues.

This program is the first in the state to use “citizen scientists to monitor a lake,” said Rob Blair, who wrote the standard operating procedure for the program. Two other lakes — Kentucky Lake and Lake Barkley — will be training volunteers next month.

A similar program using volunteers to chemically monitor creeks and streams has been in existence since 1997.

Volunteers at Herrington Lake will begin officially recording visual data at specific sites beginning Saturday, July 8, and continue recording data every 16 days through the end of October. They will take measurements, record their findings and submit them via a secure web link unique to their sampling site.

The 16-day time frame volunteers work on coincides with when a Landsat satellite — a program through NASA and the United States Geological Survey — will be flying overhead. Data submitted by volunteers will be compared to the images the satellite records at the same time. Blair said the comparison of field work with satellite imaging will help the program “tweak” its satellite observations so that ultimately, one person working at a computer can look at all the lakes in a region in one day and reliably spot any water problems.

Blair said that Herrington Lake was chosen for the pilot program partially because the Kentucky River Basin Coordinator happens to live on Herrington Lake and she agreed to help start the new program. Plus, she described the base of concerned citizens already working with the Herrington Lake Conservation League, “so we had a ready made group of volunteers,” who are interested in the “lake health,” Blair said.

During a volunteer training workshop on June 1 at Herrington Marina, Blair said the field guide developed for the pilot program — and the worksheets to be filled out and submitted — should be considered a “first draft.”

Not only do volunteers collect data, if they recognize a problem with the procedure or forms, they can make recomendations to improve the gathering and reporting process. Eventually, the program is expected to be used at all lakes in the state.

Blair said nearly half a million acres of lakes are in Kentucky, but only two people are responsible for monitoring their water quality. He said people who live on lakes tend to be very interested in and passionate about the water quality, so they believe the volunteers will be vital in not only gathering the required data, but also sharing extra observations and information that the program can use.

“We want to get folks involved,” Blair said. “They are our citizen scientists.”

Therese and Kevin Eichhorn are volunteers who will be monitoring the lake around the Paradise Camp condominium area.

“I am excited to be able to do something,” Therese Eichborn said. “I think Herrington Lake has improved greatly over the years and we want to do our part in keeping it nice and safe.”

Kevin Eichhorn said the monitoring process isn’t complicated and he hopes more people will want to take part in the volunteer project.

The volunteer handbook explains that the field reporting procedures are designed to be low-cost and quickly and easily performed.

A news release about the volunteer training program said it is anticipated that this new program will assist the Division of Water, local residents and others with ensuring lakes have safe water quality conditions for swimming, boating and fishing, and as drinking water sources. 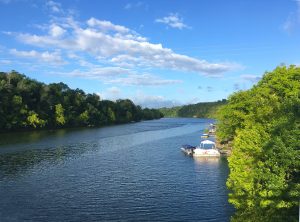 Herrington Lake is the site of a new pilot water monitoring program for the state.

Volunteer samplers were taught how to conduct various observations of lake conditions and enter them into a centralized database for water quality tracking. These sampling results will eventually be posted to an online website for the public to view. Some sampling sites on Herrington Lake were pre-selected for optimal lake assessment, but participants were also able to select sampling locations of personal interest.

About 11 resident volunteers will be monitoring Herrington Lake by observing water visibility using a Secchi Disc — a black and white circular disk lowered into the water to measure clarity. They will also measure presence of algae; currents; waves; and even trash.

According to Malissa McAlister with the UK Kentucky Water Resources Research Institute,  Kentucky’s Division of Water regularly takes samples at Herrington Lake and has found the water to be satisfactory for drinking, boating and swimming.

Additionally, McAlister reports that testing in Herrington Lake has shown E. coli levels to be “consistently low and the lake to be safe for swimming.”

“However, testing of the streams that flow into Herrington have shown some high levels of E. coli, much higher than the state’s safe swimming standard,” she said. “The large volume of water in the lake is likely diluting the inputs from these streams.”

McAlister said sources of the E. coli are from cattle and humans in rural areas. It is believed that failing septic systems are “leaking human sewage into the tributaries of Herrington Lake.”

Stephen Stanley who lives in the Bryant’s Camp area, and is vice president of Herrington Lake Conservation League, is one of the volunteers with the pilot project. He said he wanted to get involved because he is very concerned about water conditions at Herrington Lake and about a proposed pipeline project that would reverse the flow and change the contents of a natural gas pipeline that crosses the lake.

“I’m glad they’re doing this,” Stanley said. “It lets us know where we stand.”

He said he is most concerned about the amount of trash in the lake. This project hopefully will remind people in the area that the trash they throw on the side of roads and in streams affects their drinking water and their lake, he said.

“We’re all responsible for keeping our lake clean,” Stanley said.

Julie and David Pease will be monitoring the area around Chenault Bridge. Julie Pease said she hopes if program officials see the volunteers are reliable, she hopes chemical testing of water quality could be incorporated into their monitoring process.

She said there is already a state-wide program in place monitoring streams and creeks and she hopes someday the lake will be as closely tested as well.

Pease said she was pleasantly surprised at the number of volunteers at the training workshop. This shows the lake area residents’ desire to protect Herrington, she said.

“I always encourage people who use the lake to help keep the lake clean.” She said if someone goes by trash floating in the water, “Then pick it up. This is your drinking water.”

The Danville-Boyle County Economic Development Partnership could consider changes to its bylaws that would restructure the agency’s board as soon... read more