What happened when the Redpath Chautauqua circuit hit town

Danville was on the Redpath Chautauqua circuit more than 50 years in the early 1900s, according to articles in The Kentucky Advocate.

Each July, the Redpath Chautauqua brought its programs of government and various types of entertainment — from Broadway shows to orchestras — to the city for seven days.

It was held near the July 4 holiday and offered a full week of programs for a $2 fee. A large tent to accommodate the crowds was erected on Centre College campus for the event.

The town of Perryville also had a Chautauqua in July 1917. An article does not say where in the town it was held. Bob Meyers, a Centre College football coach, was in charge.

The annual Redpath Chautauqua was held in 125 cities from Chicago, Illinois, to Jacksonville, Florida.

The Redpath special train became the way of travel for many folks who headed to see a Chautauqua. It was always greeted by crowds of enthusiasts along the route.

“Chautauqua Bill” Wright, promoter of the Danville Redpath Chautauqua, and other promoters arrived in town early to take charge of advertising the event. Wright spent a few days prior to the opening day, then left for another city. He said the programs were the best ever offered to the city.

He predicted the program “is bigger, better, more elaborate and popular, than any program of its kind ever attempted before.

“This year’s Seven Redpath Festival Days and Gala Nights fairly bristle with compelling interest, without the least deviation from the highest standard which has made the Redpath famous for 50 years.”

The six-day Chautauqua in June 1914 cost only $2 for a season ticket.

It included a recital by Marcus A. Kellerman, a dramatic baritone; concert by The Cathedral Choir, band and cornet concerts by Bohumir and his band; and a grand finale “Martha” by the Denton Grand Opera Company. Great prima donna soprano Alice Neilsen performed during the final night of the July 1915 Chautauqua. She was a soprano of the Metropolitan and Boston opera companies. She traveled to all her forthcoming programs in her private car named “Alice Neilsen.”

The Redpath Chautauqua ran a second train from Chicago to Jacksonville that year.

John M. Stoddard of Tacoma, Washington, the advance man of the Redpath Chautauqua, arrived in Danville in June 1920 to make sure the upcoming event was ready for kick-off.

He was with the Chautauqua in Dyersburg, Tennessee, the week before promoting programs which drew record crowds and said “it was the finest lecture ever given there.”

Stoddard served with the American forces for 13 months as a member of the Second Division. He was wounded four times.

The feature of the 1922 Danville Chautauqua Week was on July 4 with the production of a comedy “Turn to the Right,” given by a cast of New York actors.

The comedy is an “exhilarating yet poignant romance full of laughter, thrills and the tenderest mellow heart interest.”

A season ticket also serves as admission to 18 performances including lectures on timely subjects, plays by New York casts and music by notable organizations. Tickets were sold at the Danville Laundry and Dry Cleaning Co.

The popular opera “Robin Hood” was included in the July 1925 Chautauqua.

The presentation of the comic opera, with a notable cast of principals, a spirited and tuneful chorus, symphonic orchestra and special scenic and lighting effects will be features in the opera.

May Valentine Opera Company with May conducting the presentation will be in charge of performances.

The 1927 Redpath Chautauqua was sponsored by the Chamber of Commerce and Woman’s Club and was held in a tent on the Centre College campus with programs from 3:30 to 8 p.m.

All programs held in the evening rather than morning gives old and young patrons a better chance of attending, according to Mrs. Barrett Nichols, chairman of the events.

The seven-day event include performances by the Chicago Male Quartette; Story of Science, demonstrated by R.B. Ambrose, who made homemade lightning and other experiments.

Eleanor Cook Co. portrayed customs, dances and songs of the Balkans, an operetta of the life of Stephen Foster and two comedy plays.

Ruth Bryan Owens, will have a picture travelogue, “Modern Arabian Nights”, and Tob Skeyhill will give a lecture on “Mussolini and the Blackshirts.”

The tent also was used for other gatherings.

Danville and Boyle County celebrated the July 4, 1919 holiday with a birthday party in the big Redpath Chautauqua tent on the campus at Centre College.

The program had three speakers:

“What This Fourth of July Means to Us as a Nation” by the Rev. J.Q.A. McDowell; “The American Soldier by Judge E.V. Puryear; and “The Prohibition Victory and How to Complete It,”, by Dr. H.G. Turner.

Dr. W.H. Smith gave the benediction. Music was by an orchestra. All soldiers were invited to take part in the celebration.

Charles Zublin, who has spent a life-time studying programs at Chautauqua, also was on the program to talk about “The Freedom of the Seas” and “Government Ownership.”

A postcard taken at the1913 Redpath Chautauqua appears to be a a scene from a battle reenactment. 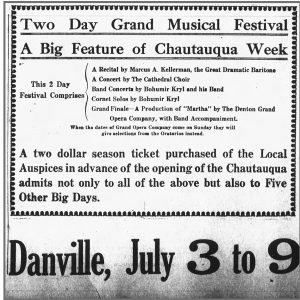 The 1914 advertisement tells of the two-day grand festival at the Chautauqua.

100 YEARS AGO — 1917 While Uncle Ben Horn was hoeing corn at his place in Brooklyn on the Kentucky... read more