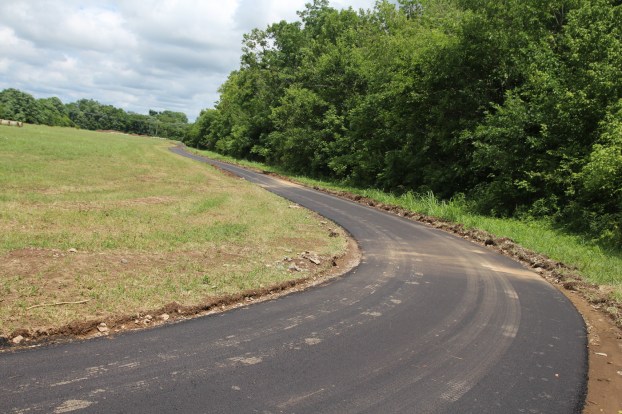 File photo by Ben Kleppinger A paved trail was added last year between the Batewood Park area and Stanford Road in Danville. An extension of that trail may be constructed this fall, connecting it from Stanford Road to the Henson Park area of East Main Street.

Danville could soon see more progress on a growing network of shared-use trails that are making it easier for non-vehicular traffic to get around town.

Mark Morgan, outgoing chair of the Convention and Visitors Bureau, documented several trail-building efforts that are moving forward during a CVB board meeting Monday:

• a trail extension from Stanford Road to the Henson Park area along East Main Street could be constructed this fall;

• the state Transportation Cabinet has approved using a bridge along Ky. 2168 for a shared-use trail, removing a barrier to extending a trail along that road; and

• “the hasn’t been put to paper yet, but there is a serious opportunity to connect Perryville Road and Lebanon Road.”

The Perryville-to-Lebanon connection would be huge for letting people travel from downtown Danville to Wilderness Trail Distillery without spending a lot of time on Lebanon Road, which Morgan said is one of the most traveled by bikes in the county, but also one of the most dangerous due to a lack of shoulders.

The three trail projects would go a long way toward realizing the goal of the Danville-Boyle County Trails Alliance: a network of walking, hiking and biking trails and bike lanes on roadways that would enable people to access much of Danville and the surrounding Boyle County countryside to the west without getting in a car.

The map of current and future trails — available at the alliance’s website, boyletrails.org — is an evolving document that can change as situations and opportunities change, Morgan said.

Jennifer Kirchner, director of the CVB and a leader of the trails alliance, said the trails network project has united people from many different groups to a common cause.

“I think at a time where sometimes we’re overwhelmed by lack of collaboration or agreement or partisanship, the trails project is really one where people want to be involved,” she said. “We’re very, very conscientious of making it a true collaborative project, because … we’re not necessarily just paving the ground, we’re making cultural changes. We’re asking people to move away from such a car-centric city or society and explore other ways of navigating and getting around and interacting.

“It takes time and we want it to be positive and integrated, not full of angst or your-side-my-side.”

The trails alliance group has involved people from the local hiking and biking communities; members of Clarks Run Environmental Education Cooperative; local governments; the Danville-Boyle County Economic Development Partnership; the CVB and others.

The trails alliance has a history of finding grant funding for projects so that the cost to local government is minimal or nothing. Morgan said one way that is accomplished is through counting local volunteer hours on trail projects toward the local matches required for grants. That helps the trails alliance land grant funding without requiring tax dollars, he explained.

The Ky. 2168 project aims to extend existing multi-use trails along the eastern portion of the highway west, ultimately reaching along the entire stretch of road and arriving at the north end of the Danville Bypass.

The Stanford-Road-to-East-Main trail is an extension of a trail that was paved last year, which runs from Stanford Road to the Batewood Park area, near Second Street along Clark’s Run creek.

Other projects in the works that would add to the trails network include a plan for an educational park at the newly renovated Coldiron-Watkins Water Treatment Plant on Lexington Avenue. Educational signage would be added along trails to go along with the educational material at the water plant park, so that classes or families could learn about the water cycle at the park, then walk the trails to see the actual stages of the water cycle in the real world.

There are also plans for a mountain biking trail, which Morgan said are moving along — two of the three property owners who need to grant easements for the trail are on-board and details have nearly been worked out with the third.

Kirchner said all the different projects may seem “disjointed,” but that’s because “good collaborative projects are slow” and “there is method to our madness.”

“It’s a project over the course of many, many, many years and it is dynamic,” she said.

The birth of a business What started as a way to give unique presents to the moms-to-be in her life... read more