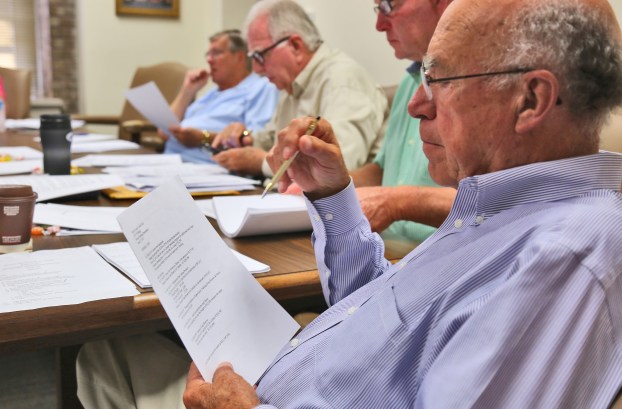 Ben Kleppinger/ben.kleppinger@amnews.com
Boyle County Magistrate Phil Sammons, front, will vote as the county’s alternate representative on the board of the Danville-Boyle County Economic Development Partnership at today’s meeting, when the EDP is expected to approve a budget for the fiscal year beginning July 27.

Boyle sending alternate to vote on EDP for first time

When the Danville-Boyle County Economic Development Partnership votes on its next budget today, Boyle County Magistrate Phil Sammons will be sent to vote in Judge-Executive Harold McKinney’s place.

It may be the first time that Boyle County has ever used the option of sending an alternate to fill its voting seat on the EDP when the primary representative is unable to attend.

EDP President and CEO Jody Lassiter said Tuesday that as far as he knows, Sammons has been listed as the alternate for the county’s EDP seat for nine years.

Sammons’ attendance comes after the fiscal court was critical of the EDP for voting on a “name change” — adoption of the alias “Develop Danville” as the EDP’s “external marketing identity” — without Danville or Boyle County representatives present.

Magistrates met with EDP Chair Ben Nelson earlier this month to voice concerns the EDP was acting without informing its public-sector members. They alleged they only found about the “Develop Danville” name change after they read about it in The Advocate-Messenger.

But Nelson pushed back on that criticism, arguing the agenda for the meeting in question clearly identified the planned name change and was sent to all the magistrates. It was also noted at that meeting that the county could send its alternate when McKinney was unable to attend an EDP meeting.

The EDP board meeting Sammons is attending today is a special-called session needed so the board can approve a budget for the next fiscal year before it begins on July 1. McKinney said he will be “out of pocket” while finishing continuing education required as a public official, so he will be unable to attend.

On Tuesday, Sammons asked his fellow magistrates and McKinney how they think he ought to vote.

“This is my first meeting and they’re voting on the budget,” he said. “I’d like to (know) how I’m supposed to vote. What’s your all’s gut feeling? I’m one person; I’m representing the court.”

“I think the budget is a good budget,” McKinney said. “I think we need to get the budget passed so that folks can get about the business of economic development. That’s my take on it. I recommend you go down there and vote for it.”

The largest change proposed in the EDP budget is the addition of a chief operating officer position, which would serve as a second-in-command underneath Lassiter.

“I have a problem with Jody being able to hire the assistant — and fire — but he’s paying salary with taxpayers’ money and taxpayers don’t have any input,” Caywood said.

Nelson reaffirmed for Caywood that the EDP board has hiring and firing authority over Lassiter, but Lassiter is the one in charge of staffing underneath him.

McKinney noted that Lassiter serves “at the pleasure of the board” and he expects Lassiter will work with the EDP board on the hiring of the position.

“I don’t see it as a problem,” McKinney said.

Magistrate Jack Hendricks said he also doesn’t see it as an issue.

“I just don’t think there’s any way he would do it without board approval,” Hendricks said.