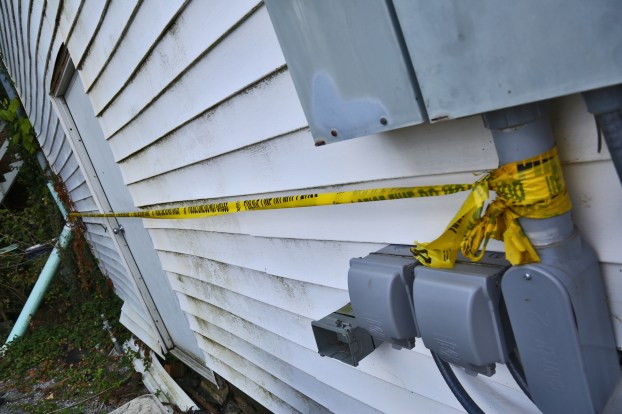 Ben Kleppinger/ben.kleppinger@amnews.com
Caution tape blocks off the rear entrance to 311 W. Main St. Tuesday afternoon. No one is currently allowed inside the building due to a partial collapse of the second floor.

The second floor inside a condemned Main Street building has partially collapsed, leading the City of Danville to require a demolition plan from the building’s owner.

A large portion of the second floor of 311 W. Main St. has collapsed onto the first floor due to water damage, according to a notice of inspection filed last week by Danville Codes Enforcement Officer Tom Broach.

“Due to the damage, the Danville Fire Chief Ken Pflug closed the structure to anyone being in (the) building because of the dangerous situation,” the notice reads.

The owners, Harvey A. McCrosky III and Ann Yager McCrosky, were given 14 days from the date of the notice — June 23 — to provide the city with a demolition plan prepared by a structural engineer. Within a month — by July 23 — they must have begun demolition of the building, according to the notice. 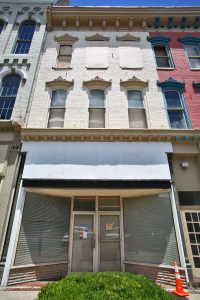 The building at 311 W. Main St. has been condemned since 2010. It may now be demolished before the end of July, due in part to a partial floor collapse from water damage.

“The 60 percent that is in deplorable condition was the rear portion of the building that had suffered water damage due to the roof being in disrepair,” Cox wrote. “Over time, water had entered the building freely and had rotted the framing and floor joists to where collapse was the result.”

Broach took photos of “the entire building” in order to “adequately portray the condition of the building,” Cox wrote. After Chief Pflug decided to “barricade the rear entrance with caution tape,” City Engineer Earl Coffey was called in to consult, according to Cox’s letter.

“Earl looked at the photos taken and made the observation that a rear common wall posed a danger of collapsing onto the office of Johnnie Durham at VIP Realty,” Cox wrote.

Restoration of the building at 311 W. Main St. has long been a topic  of discussion at Danville Architectural Heritage Board and City of Danville meetings. It was first condemned in 2010, and since then, the AHB has held numerous meetings with owners, trying to move along restorative construction efforts on the building.

In April, the AHB issued a memorandum to the city, detailing its years of work and warning that the building “shares a common wall on both the east and west side, which means that two other properties could potentially be lost if this building is demolished.”

“It is our opinion that this property is quickly going to be beyond what is financially feasible for any person to save … unless action is pursued as soon as possible,” the memo reads. “… We recommend that a petition be filed with the Circuit Court to require immediate action by the owner/owners to address all the issues leading to extensive violations and condemnation status.”

Since that memo was issued, the Danville City Commission has discussed the property at multiple meetings, as city staff worked with the owners to establish a plan and timeline for restoration.

Most recently, the city was preparing in early June to issue a building permit if an inspection was completed and a plan for work on the building satisfied city officials.

At Monday’s commission meeting, Danville City Commissioner Kevin Caudill questioned if the collapse means the building is totally beyond repair.

“There’s no one allowed in there until we get a structural engineer’s report to show us anything differently,” Codes Enforcement Director Bridgette Lester said. “Anything being done to that building … could cause other damage to the building.”

Commissioner Rick Serres asked “could a determination be made on how (the building is) affecting its neighbors?”

City Attorney Stephen Dexter said until the city has a structural engineer’s report on the building’s condition, “it would be premature for staff to speculate on an issue that may have liability concerns.”

“This is by and large an administrative issue,” Dexter said. “I think this should be deemed a report to the commission on what is an issue of concern, but I’d be hesitant to enter into a question-and-answer session in public.”

Mayor Mike Perros said he wants it known the city commission is “very, very interested in the outcome of this property.”

“We’re concerned about the integrity of our downtown,” he said. “To a person, this commission is willing to assist in any way possible to see a positive end to this situation.”

A long-term strategic economic development plan has been accepted and received — but not necessarily approved of — by the... read more