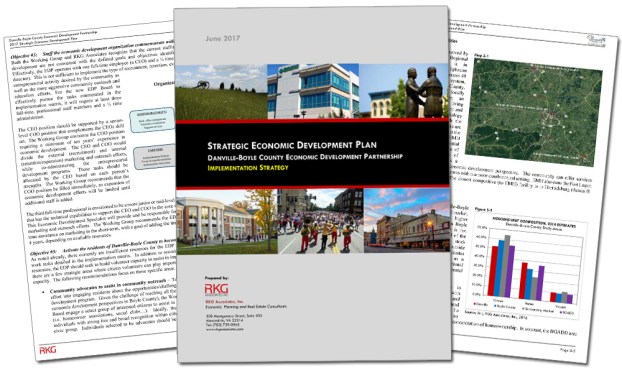 A long-term strategic economic development plan has been accepted and received — but not necessarily approved of — by the City of Danville and the Boyle County Fiscal Court.

The plan is the result of close to 10 months of work between consulting company RKG Associates and members of a local working group assembled by the Danville-Boyle County Economic Development Partnership. The working group has been looking into a strategic plan for around two years.

It contains a 45-page “implementation strategy” document that details various strategies local governments and leaders could use to improve economic development and attract business to Boyle County; and a 61-page “technical appendix” of supporting data for the recommendations.

The plan also proposes reorganizing the EDP’s board of directors.

RKG was paid nearly $84,000 to develop the plan, with the bulk of that cost being covered by the City of Danville — a main reason release of the plan was delayed until the city formally “accepted” the final product Monday night.

“The motion tonight is to vote on acceptance of this report. It is not necessarily to vote on agreement (with) the content,” Mayor Mike Perros said. “We funded it. They have met their contractual obligations, so as a matter of protocol, we need to accept that.”

With the city’s acceptance, EDP Chair Ben Nelson told magistrates Tuesday, “it concludes the contractual obligation of RKG and we commence to roll the plan out.”

“The working group had discussed that it would be nice as a gesture of good faith that you all as a fiscal court accept the report,” Nelson said. “Again, acceptance doesn’t mean you approve everything in it. It means you acknowledge we have built a plan together.”

Nelson said officials can now “digest” the contents of the plan “as we begin to move out to try to move from drafting a plan to trying to implement a plan.”

Nelson said a “boatload” of copies of the plan are being printed and digital copies will also be available online, in order to ensure anyone can read it if they would like to.

Printed copies of the strategic economic development plan will be available for review at the Boyle County Public Library, the Community Arts Center at Fourth and Main streets, the Boyle County Courthouse, Danville City Hall and Grayson’s Tavern in Constitution Square Park. The 45-page “implementation strategy” document can be downloaded at bit.ly/SEDP2017-Strategy. The 61-page technical appendix document can be downloaded at bit.ly/SEDP2017-Appendix.

Boyle sending alternate to vote on EDP for first time

When the Danville-Boyle County Economic Development Partnership votes on its next budget today, Boyle County Magistrate Phil Sammons will be... read more