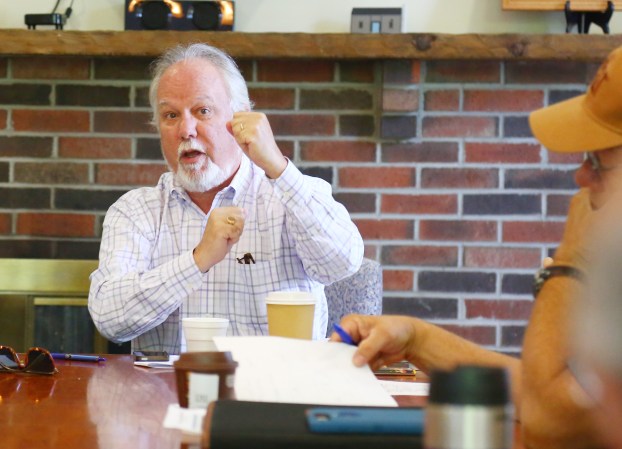 The Danville-Boyle County Economic Development Partnership board approved its next budget Wednesday, paving the way for the hiring of a new chief operating officer position.

EDP Chair Ben Nelson has said the new COO position is long overdue and essential if Boyle County wants to see success in economic development. The EDP budget for the 2017-18 fiscal year allocates $75,000 for the new position’s salary, as well as $7,500 for health insurance and $6,450 in other benefits.

Approval of the budget was unanimous, but it didn’t come without some spirited debates over revenue sources and who gets to hire the COO position.

Up first: the City of Danville’s “matching grant” of $40,000, which it has promised to the EDP only if other entities public or private also provide $40,000 in new funding. The EDP budget includes the $40,000, though it’s not a guaranteed revenue source. The budget also includes a projected $30,000 in revenue from new “Chairman’s Circle” donations. Those funds haven’t been raised yet, either; but if they are, they would count toward the matching grant.

“That’s a total of $70,000 that really isn’t in the bank,” Danville City Commissioner Denise Terry said. “… I wanted to clarify that that’s not guaranteed.”

Danville Mayor Mike Perros questioned what would happen to the budget if the EDP fails to raise the additional $30,000 in Chairman’s Circle donations. 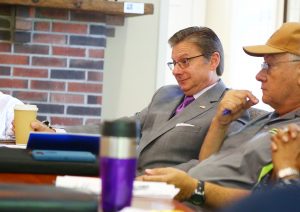 Danville Mayor Mike Perros questions revenue sources in the Economic Development Partnership budget that are not guaranteed to be realized during Wednesday’s EDP board meeting.

“Hypothetically, we get into Dec. 1, and the additional $30,000 has not been raised for whatever reason,” he said. “What’s the plan of action at that point? We may not even want to discuss this.”

“Mr. Mayor, to that point — that’s kind of a negative connotation,” EDP board member Tom Poland responded. “I appreciate your thought on that. What happens if people stop paying taxes? What’s your plan B on that?”

“We probably will then cut EDP budget and other discretionary items,” Perros said.

“I understand, and it’s a really good question, but —” Poland said.

“It is a good question,” Perros interjected. “And it is the question, Tom, because we’re sitting here as fiduciaries for this community. We should be responsible for asking these kinds of questions.”

“To your right is the plan from RKG,” Poland said, referencing the long-term strategic economic development plan that has now been released and was distributed to board members Wednesday. “You have been at all those meetings, you have been through this since day one. You know there has been a leap of faith in this, and you have been there throughout. It’s always good to think about a plan B, but we’re here today to approve this budget.”

“Fine — approve the budget, and I’ll still ask, ‘what is plan B?’” Perros responded.

Nelson interrupted the exchange to “give my answer.”

“My answer is we need additional talent to help drive the economic development of this community. That is first and foremost the primary objective,” Nelson said. “If I fail on my revenue side, I will slash additional expenses to retain that head count.”

Nelson said he’s been talking with board leadership for two years about the need for another employee, and he’s warned it “don’t you be talking about head count if you don’t have a way to sustain it.”

“I pray this board is responsible enough not to hire an employee and then turn around and go, ‘oops, I was kidding; goodbye;’ because we’d be dirty dogs,” Nelson said.

Instead, Nelson said he would recommend the board cut things such as website maintenance or economic development trips for EDP President Jody Lassiter.

“That’s precisely why I asked the question,” Perros said. “It shows as you just said that the low-hanging fruit to cut is the very thing that we’re trying to accomplish in terms of getting (Lassiter) out and about, recruiting. And that’s going to be the first thing that we’re going to cut … what’s going to suffer is the very thing we’re trying to accomplish.”

“I disagree,” Nelson said. “We will scale back what we have to on the expense side to maintain the labor.”

“We don’t have any arms and legs to do the stuff this community says it wants done,” he said. “… What we are asking this staff to do is unrealistic.” 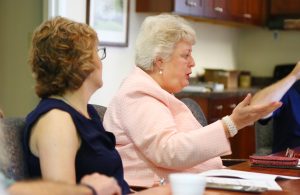 Sally Davenport, board member and CEO of Ephraim McDowell Health, asked if the EDP has a plan in place for getting the $30,000 in donations “that makes it feel more comfortable to put this into the budget?”

“Yes,” Nelson said, noting that the COO position would be responsible for working to grow financial support for the EDP.

“The Chairman’s Circle has not prospered in the past because you had the board trying to shepherd it by itself,” he said. “We have started a list of prospects … to me, I think it’s reasonable to expect there’s additional private dollars out there that could hit the $30,000. I don’t think that’s outrageous.”

After further discussion, Davenport said “I need to understand what the plan is for us to accomplish that and I don’t quite understand.”

Nelson said he believes the additional opportunities for donations to the EDP are out there.

“If you want to sit here and brainstorm what those prospects are, I’d be glad to do that.”

Nelson said it’s also possible to run a community campaign, asking anyone and everyone to make dollar-for-dollar donations that would be matched by the city’s grant.

“If I have to, I’ll mount that campaign for this,” he said.

EDP Vice Chair Terry Gilbert said many on the EDP board including herself do not have the expertise to fundraise effectively. The new COO would potentially have those skills.

“We don’t know exactly what the plan is going to be, but I have every confidence with the people that sit around this table and the people that are leading it, that we’ll get it done,” Gilbert said.

The second item debated: The fact the EDP’s bylaws state that the president and CEO position (Lassiter) is responsible for hiring and firing the new COO position, while the board is only in charge of hiring and firing Lassiter’s position.

Terry said she would be OK with an EDP working group hiring the position instead of Lassiter.

Danville City Manager Ron Scott said in every state except Kentucky, city managers have “exclusive” hire-fire authority, and in Kentucky they have the same authority “subject to board approval.”

Nelson said the setup in Danville is a good example of how the EDP plans to operate.

“This not about, ‘we’re not going to be inclusive;’ I’m trying to clarify who has the hire-fire authority, and under the current structure, it’s going to be like Ron said,” Nelson said, adding that any of the EDP partners who want to be involved in the process of finding the new COO is welcome to participate.

Magistrate Phil Sammons said he thinks Jody should recommend, “but he can’t really hire this person without board approval.”

“If he’s smarter than the average bear, he wouldn’t go off and hire this person in a vacuum,” Nelson said. “… He will come to the board with a recommendation and he would be dumber than dirt to hire somebody we don’t agree with.”

“But how do you know that if you’re not interviewing these people?” Terry asked. “… I just really think there needs to be a committee.”

EDP board member and local attorney Mark Morgan explained that there are ways non-profits such as the EDP are required to operate by law.

Morgan added “this form of governance is throughout our society.”

Morgan reiterated Nelson’s statement that anyone who wants to be involved in helping pick the next COO is welcome to participate.

“Anyone in this room or in this community who wants to be involved in this process should make that known to this board or to the board chair and the board chair will try to accommodate that,” Morgan said. “If you all want to be involved, then please step up. We are short-handed and we would love to have more people involved.”

Nelson said the process “is collaborative.”

“But that’s contradictory to what you said when you say, ‘Jody makes the hire.’” Terry said.

“He does make the hire,” Nelson said.

Morgan explained again that the bylaws require that Lassiter’s position is the hiring and firing manager.

“It doesn’t mean that the process is not transparent; it means that that is who has the ultimate responsibility for that decision,” Morgan said. “But if they make a bad decision, then others have the responsibility to replace them.”

More than 20 people, most from the arts and tourism communities, participated in a community forum on “wayfinding” signage in... read more