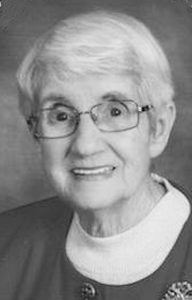 Stella G. Farmer, of Georgetown, KY, and formerly of Lancaster, KY, passed away on June 24, 2017. She was born August 16, 1925 in Norwich, England, the daughter of the late Isaac and Jane Elizabeth Lovick, both deceased.

She met and married Donald A. Farmer while he was stationed at a U.S. Air Force facility near Norwich during the early to mid- 1950s. She became a naturalized U.S. citizen in 1981.

She served in the British Women’s Army, (the Territorial Auxiliary Service) during World War II, from February 1942 to June 1946. She was assigned to an artillery regiment in Southeast England (near London and the English Channel) as a telephone operator. Her job was to plot on a “grid”, information received from “spotters” as to the position and path of enemy aircraft as they approached England from bases in Europe. This information was very useful to the Royal Air Force fighter planes in the early interception and destruction of enemy aircraft.

The family requests that in lieu of flowers memorial donations may be made to the charity of your choice.