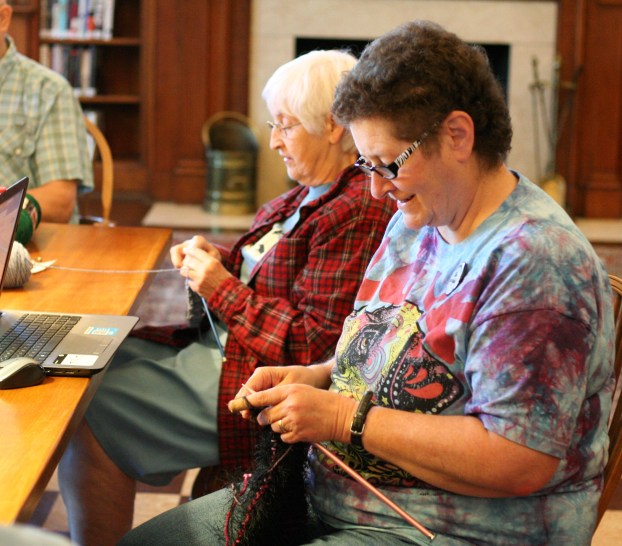 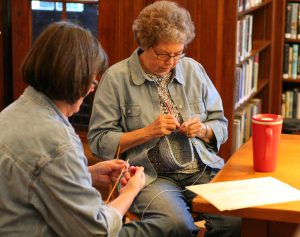 What started as a four-week program at the Boyle County Public Library to make hats for homeless individuals has turned into a more than four-year Monday night group, making hats, scarves, gloves and more for a variety of organizations.

“Our goal was 100 hats to start with and we did 200,” said Kathy Phillips, one of the original members and a staff member at the library. “They all wanted to keep doing it, so we did. It’s been a fabulous group.”

Since then, they have made thousands of items, and have sent:

• hats, gloves and scarves to school children at the Kentucky School for the Deaf, the Danville Independent Schools and the Boyle County Schools, to the Salvation Army and to an American Indian Reservation in South Dakota;

• blankets and lap quilts to to Heritage Hospice; and

• baby hats and blankets, along with lap quilts to hospitals.

And, they’re still sending items to help the homeless.

Susan Brashears, of Perryville, one of the early members of the group, knits and crochets. She said one of her favorite groups to send to was the Kentucky School for the Deaf, because they always receive a thank you card and a photo of some of the students wearing the items. 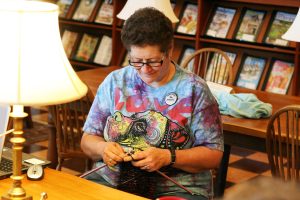 Brashears got her mom Terry Lewis, also of Perryville and a crocheter, coming along in those early days, too. It’s been fun, she said.

“You get to relax and have fun,” she said.

Initially, there were going to be food and speakers, but Brashears said they decided to stop doing that part, and the group moved into the old part of the library, into the reading room.

Charlotte Norby, of Danville, was one of the early members, too, although she took a slight break.

“I thought it was only four weeks, so I stopped coming,” she said, smiling. “Much later, someone said, ‘How come you’re not coming anymore?’ and I said, ‘I thought it was just the four weeks.’ ‘No, no, we’re still going.’ I had no idea.”

There’s no official leader to the group, which just comes in and starts working. New members are always welcome and there’s no fee to join. For those who are interested in attending, but don’t know how to knit, crochet, or use a loom, members will teach them. 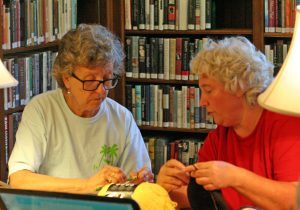 Kendra Peek/kendra.peek@amnews.com
Kathleen Pemberton, left, takes some tips from Charlotte Sands, right, while starting a hat during Monday’s session of Crafters who Care. Pemberton said it had been many years since she crocheted and wanted to try it again. Monday was her first time with the group.

Kathleen Pemberton, of Junction City, who learned to crochet as a child, was visiting for the first time on Monday. Pemberton said she was trying to relearn the craft. Charlotte Sands was helping her, while also crocheting. When Sands, who lives in the Crab Orchard area, started a few years ago, she began bringing her mom, Gloria Sands. Later, her dad Gary Sands started coming with them.

So far, Gary, who was using a loom, is holding his own as the only man who regularly attends, however, they said there had been others before.

Anywhere from five to 12 people attend each week, and the group is all ages. There aren’t currently any children participating, but they have had kids in the past. 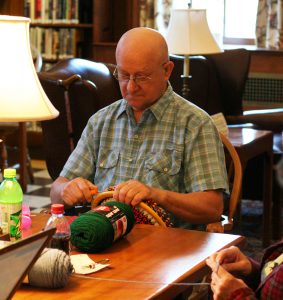 Kendra Peek/kendra.peek@amnews.com
Gary Sands uses a loom to make a hat during Monday’s session of Crafters who Care at the Boyle County Public Library.

The group is always open to accepting donations of yarn, too, Phillips said, which helps them continue making and giving items away. The yarn stays at the library, and can be dropped off there. She said there are also people who can’t attend the weekly events, such as herself, and instead send donations in.

If you don’t know how to knit, crochet or use a loom, members are willing to teach. Participation is free, simply show up. Yarn donations are accepted. Call (859) 238-7323 for more information.

For one night a week during the summer, under a canopy of trees and along the Chaplin River, Perryville’s Baril... read more