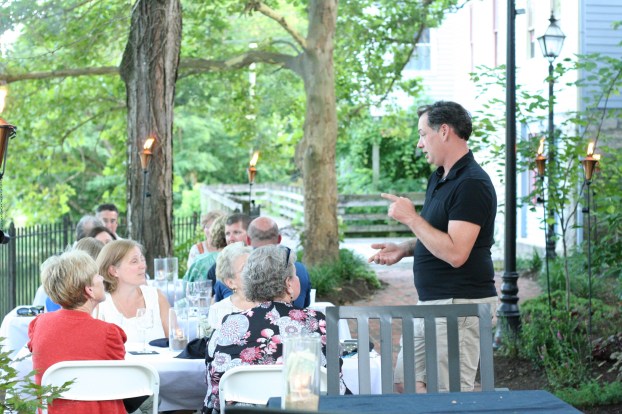 Kendra Peek/kendra.peek@amnews.com Paul Webb speaks with some of the guests at Wednesday's Midsummer's Night Dinner.

For one night a week during the summer, under a canopy of trees and along the Chaplin River, Perryville’s Baril Park is transformed into a dining experience, serving as home to a pop up restaurant in the city. 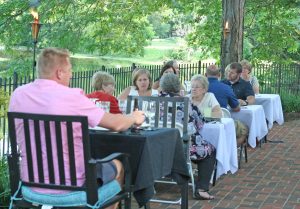 Kendra Peek/kendra.peek@amnews.com
Some of the patrons at Wednesday’s Midsummer’s Dinner.

“The original thought was to go to other locations in Boyle County,” said Darcey Schneider, director of the Perryville Social Club. “People were saying this was such a beautiful location, a unique idea, they would be happy to drive here.”

The idea for the pop up restaurant came about after she and Paul Webb, co-director of the club, sat down to discuss unique ways to to make the group more successful.

Schneider said they “feel like this is a success.”

The cost is $25 per ticket for each event, which must be paid in cash at the event. A cash bar is also available; lemonade and iced tea are provided.

The themed meals have included:

• brisket on the bricks; 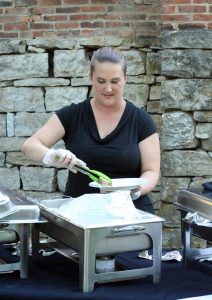 All meals have been prepared by Cue on Main Catering. The next open meal is July 5, and will be a southern potluck-theme, which will feature “fried chicken and all of the fixin’s.”

Webb said it’s important to note that all the food will be provided for the meal, which will include cole slaw, squash casserole, collard greens, pasta salad and more.

Schneider said they are also planning a seafood boil, and an Irish-themed meal.

“We are trying something unique,” she said.

A portion of the money pays the catering, provided by Cue Hospitality Partnership, and a portion goes to the Perryville Social Club.

Servers for the night are volunteers. In exchange for working, said Webb, the volunteers get to enjoy a meal. Tip jars area also placed on the table and are split amongst the servers at the end of the night. He said people can contact them if interested in volunteering.

Sponsorship options are available, ranging from $80 to $350, and are tax-deductible. Sponsors can receive business logos on advertising and social media, and be featured on table tents at the events, among other things.

About 30 people on average have attended the event, Schneider said.

Josh and Shelly Stinnett were attending for the second time on Wednesday night, which was called Midsummer’s Dinner.

“It’s like getting away without having to go anywhere,” Shelly Stinnett said.

Her husband, Josh, said he enjoyed the food, but he thought the atmosphere added something to it. 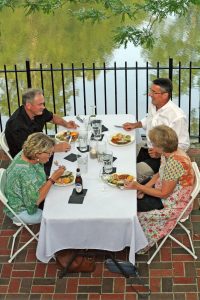 “I think most people would come back just for the atmosphere,” he said. Despite being served outside, the tree canopy keeps the area cool, he said.

The Perryville Social Club is working to raise money to benefit city beautification projects, and to help elderly individuals in the city and other projects. Schneider said they gave gifts to children at Perryville Elementary School during the Christmas season last year, and are hoping to save funds to do the same this year.

“If there’s an idea or things that need to be done, we’re happy to make a donation,” she said. “We want to make an investment in Perryville.”

Schneider said the club will be meeting soon to work on a “laundry list” of things to do in Perryville.

To learn more about the July 5 pop up restaurant event, visit the Perryville Social Club on Facebook at facebook.com/perryvillesocialclub. Reserve your spot by 4:30 p.m. Monday by messaging the social club or texting (502) 472-6402; potential sponsors or volunteer servers can also message or text to learn more.