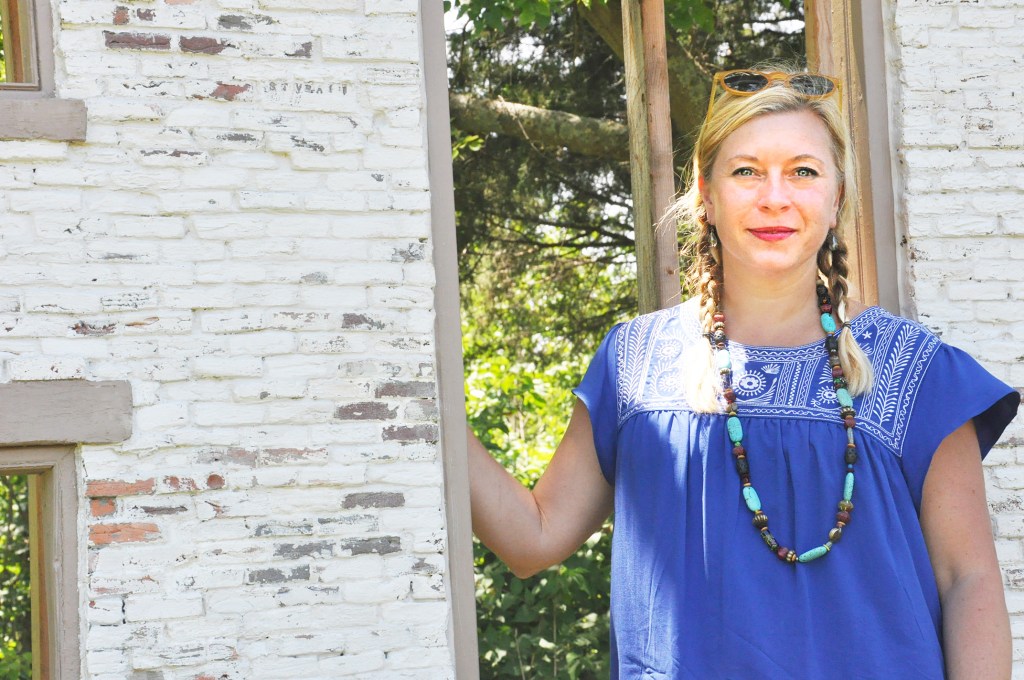 Photography by Bobbie Curd/bobbie.curd@amnews.com
Artist Anessa Arehart stands at the entrance way of the developing sculpture trail. The 3,000 fired miniature bricks to the doorway facade sculpture was created by artist Angela St. Vrain.

CORNISHVILLE — Down Mackville Road in Mercer County, not too awfully far from the city limits is Little Wing Hollow farm. Artist Anessa Arehart and husband Beau Walsburger, upon first glance, run a paddling business on the Chaplin River, just a walk over the hill from their home and barn.

Sisterhood in the woods

Arehart is an accomplished artist, her art often used as covers for Leo magazine in Louisville (where she lived for 20 years), among many magazines who used her pieces as cover art and featured stories about her. 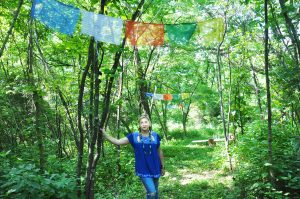 Arehart stands underneath prayer flags hung throughout the sculpture trail, which is dotted with pieces of art.

But now, her pieces are created in a small studio marked “LOVE” in large letters, next to an immaculate hillside. She has flowers hung in mason jars filled with water over a table with chairs facing the view, and flowers bloom wildly throughout the huge, open field.

The walk through the forest between the studio and their home has turned into a sculpture trail, with an impressive entry-way created in fired miniature bricks by artist Angela St. Vrain. Different types of glass designs hang from trees, like the glass pods by Carolyn Spears or her woven glass beehive hanging through a branch.

Dream catchers, like one made out of a lace doily and barbed wire by Harrodsburg artist Laura Sullivan, also don trees, as well a turquoise catcher made out of a bourbon barrel hoop by artist Tiffany Ackerman Westmoreland. Prayer flags are tied throughout the path. There’s an old-time phone displaying the message that “Nature is Calling,” with the artist Monica Poe Brown inviting participants to write a sentiment and put it in the drawer. 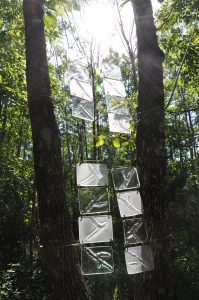 Glass installations by Carolyn Spears are on the sculpture trail.

Arehart wants artists of all genres to participate in the art path. She even has a masculine looking sculpture incorporating cinder block and wire.

Her home is often the sight for nature painting parties, bringing groups of friends and first-timers together to create outside and paddle down the river.

Now, she has put together a Cowgirl Camp, which is running July 22-23 but already at capacity, inviting women who may not be so comfortable in a nature setting to learn in a fun, laid back environment focusing on self-care, self-reliance, sustainability and sisterhood. Multiple instructors and friends — around 18 or so — have been enlisted and scheduled for the weekend to hold courses ranging from how to split wood and survivalist skills, to workshops on organic farming and paddling classes.

There will be yoga, tai chi, a botanist and birder, a medical herbalist, ukuleles and cookouts, and even a masseuse — but it will be camping in tents, Arehart says, and being one with nature.

She sits facing the Chaplin, at a picnic table on the river path. It’s nothing short of amazing how much being in the calm, hearing the birds and watching the dogs run free has changed her life, she says.

August of 2013, Arehart was rear-ended at a stoplight in Louisville. She sustained an injured back and a bad concussion. Six weeks later in September, she finally got out of the house to go to dinner to celebrate her mom’s birthday and was rear-ended again at another red light, this time in a five-car-pile-up. Doctors now surmise Arehart endured a second concussion before the first one healed, causing diffuse axonal injury to both frontal lobes — meaning her brain is torn.

She says she doesn’t remember much before the second wreck. At first, she couldn’t spell her name. She had to relearn other simple things, like how to fill out a deposit slip for the bank, how to break questions down word-for-word so she could understand them and the names of everyday objects she’d forgotten.

She holds a pen in her hand.

“Like if I had a spoon. That’s the first thing you learn as a kid, and I’m thinking ‘What the hell is this,’ and I know I knew what it was, but I couldn’t say the word. It was terrifying.” 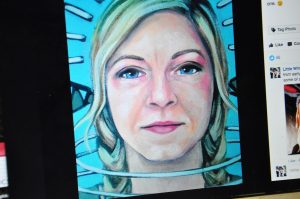 A piece Anessa Arehart did of herself after she sustained a brain injury.

When she attempted to get back out into public — she becomes easily overwhelmed with excess lights, noise and crowds — she got turned around quite a bit, finding herself somewhat lost in areas she was very familiar with. The grocery store with its beeps, lights, people, all of the busy labels — it could make her freeze up when she attempted to shop.

After she got completely lost a second time, she almost gave in. She became depressed and stayed in bed.

Before the injury, she had left a corporate job to start a social media marketing company on her own. She had some great accounts, but no insurance.

“Looking back, I see now that I didn’t even realize how injured I was. I just thought I was depressed. My apple cart got turned over.” 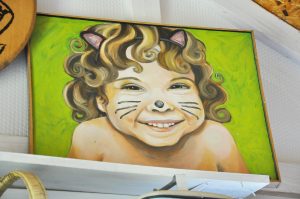 So she got lost back into her art, something she’s done since age 7. She shows pieces posted on Facebook from a magazine cover using her self-portrait from after the brain injury, which is painstakingly beautiful but nowhere near as realistic as her earlier pieces.

“See? They’re just flat. See the difference?” The comparison portrait is of a little girl, dark curls and sparkling eyes. The laugh lines Arehart has caught, the dimples beside her mouth, all make it incredibly realistic.

Moving to the farm and spending more time in a serene setting has made a huge difference for her. Although Arehart is honest — she still battles with depression and pain, and insurance companies are still battling her in court over paying any of her medical bills, a combination that can at times seem impossible to live with.

She says she knew she needed to move to the farm because “every time I came here, I didn’t want to die as much. I finally felt like I might be able to be OK.”

She apologizes for crying. It all still hurts her to think about, literally, she says. It’s been three years, but she still suffers from ringing in the ears, horrid headaches, visual and balance issues, fits of anger and all the fun kinds of things that come along with frontal lobe damage and post concussion syndrome, she says. She goes to therapy to help her figure out how to deal with the challenges of her new limited skill set — a skill set she describes as “a lot less kickass than my original one.”

Plus, her injury being an invisible one, it’s sometimes hard to express to others exactly what she goes through. We live in a world that believes, ‘Well, she has her lipstick on, she must be all better,’ Arehart says. And sometimes, she is not better — at all. 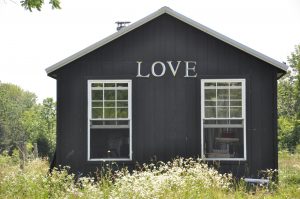 “I have a brain injury. This is my reality …” she pauses and squints a second, trying to think of the next word, rubbing her hand where a faded list of things to remember was written in ink. “It’s been incredibly hard to be patient, and accept that I’m just different now. My brain is just different.”

She may be creating a new her, but she still grieves for the old one, she says, and that is the strangest experience ever.

So, if nature can make her feel better about her “different brain,” she knows it can help others feel better about whatever they may be going through in their life. Or even if they’re not going through anything, and just want to go somewhere their cell phones don’t work (there are some spots…) and reconnect with friends in nature, among some art.

“Makes me happy to see … They see their phones don’t work down here by the river, and they have to talk to each other. Kids take about 15 minutes to, but they eventually put down their tablets and turn into kids again. They pick up sticks, catch frogs and learn why it’s important to take care of the environment, and each other.” 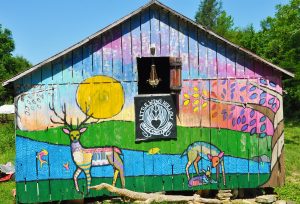 Arehart keeps herself busy around Little Wing Hollow, including painting the barn.

To her, everything around her in this place is art. It’s the best art, she says. Her Instagram, named after the farm, boasts some incredibly beautiful pictures. Yes, she’s into it — posting pictures, and why wouldn’t she be? There, on Instagram, she says, are all of her memories, right there in chronological order, with footnotes and hashtags.

Cowgirl Camp is, for her, a way to keep her brain busy.

“Cowgirl Camp is something the old me would have done. If something like this has been able to pull me out of such a dark place in my life, I want to share it. I have to.”

• To find more out about visiting Little Wing Hollow to paddle, hit them up on Facebook via Good Time Paddling, facebook.com/goodtimepaddlingky. For more on paddling and Little Wing Hollow, visit littlewinghollow.com.

• Cowgirl Camp already reached it capacity for registrations, but a list will be collected on those interested in the next session, date still pending. For more information, visit cowgirlcampky.com.