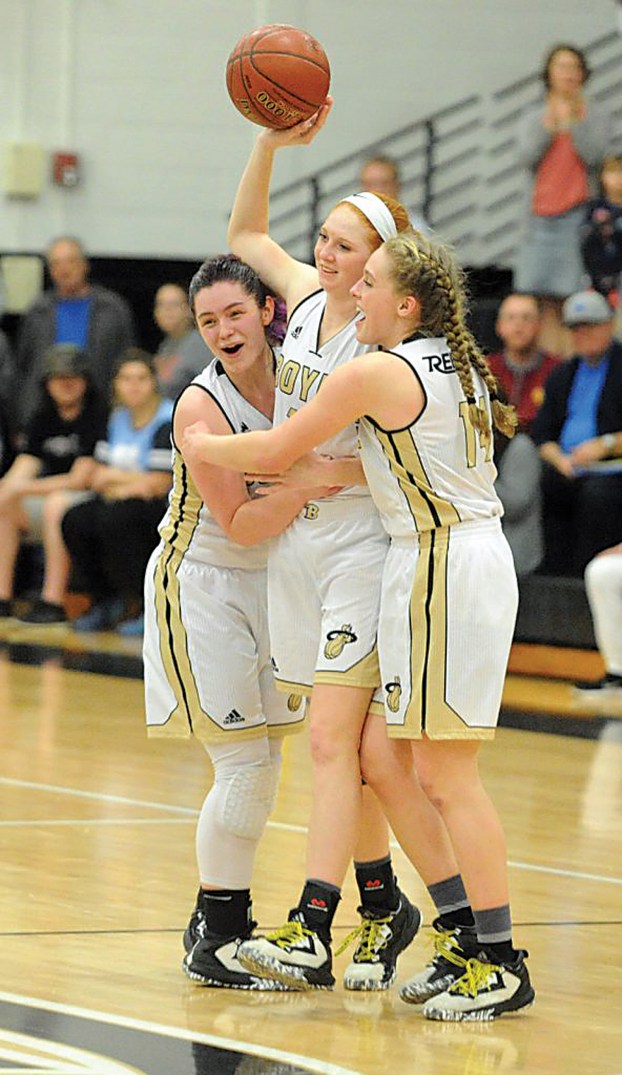 Matt Overing/matthew.overing@amnews.com Emmie Harris of Boyle County, center, was named the Female Athlete of the Year for the third consecutive year.

If you ask any of her coaches, they’ll all tell you the same thing why Emmie Harris stands above the rest of the female athletes in the area.

“Her desire to win and her desire to do what it takes to win,” Boyle track coach Brent Wagner said.

Rebels girls soccer coach Brian Deem added, “She’s a winner, her confidence in herself as well as her confidence in her teammates and her belief in her teammates’ ability really set her apart. She refused to lose, and when she felt like she had to take some things more on her shoulders, she was willing to take that burden. But she realized she was surrounded by great athletes and utilized them, got them involved as well.”

And not coincidentally, Harris agrees.

“I’m very driven,” Harris said. “I’m very, very competitive. I really take it to heart when I lose or mess up. I feel like I’m really driven to not only help myself but to better my teammates.”

For the third straight year, Harris has been named The Advocate-Messenger Female Athlete of the Year for her starring role on the Rebels soccer, basketball and track and field teams.

Harris capped off an incredible high school career with a trip to the 12th Region final in soccer, the region tournament in basketball and a second straight state championship in track. That upped her totals to three region final appearances in soccer, with one title, and four region championships in track.

“I can’t think of anyone more deserving of this award than Emmie,” Boyle basketball coach Greg Edwards said. “She has meant so much to our school and Boyle County athletics.”

Harris has been a varsity athlete for the Rebels since her seventh grade year in basketball. But she said her start as a standout athlete goes back further than that, to time spent practicing and competing against her older sister, Hannah.

“When I was little, my parents and my sister pushed me,” Harris said. “My parents made me play soccer and basketball for at least an hour each day. I played against my older sister, and I was really competitive when I was little, so I would cry when I lost. I would beat and bang with her and it ended up helping me.”

Being counted on from an early age forced her to grow up on the field and court quicker. She wasn’t without good role models, though.

“I look back to when she was a freshman and sophomore and being able to play with Meghan Paynter, Madelyn LaFavers, Logan Arnold, Chelsea Gill, those kids helped get Emmie to where she was and helped mold Emmie to realize she can’t do it all on her own, she has to rely on her teammates,” Deem said. “But at the same time if there comes a point where you need to put the game on your shoulders, you need to have the courage to do that. Emmie definitely had that.”

Harris said, “Playing up helped me get stronger, not just physically but mentally because these girls were older and faster than me, so I had to work to keep up with them.”

Harris has been one of the best soccer players in the region since her sophomore year, and the Rebels record has improved each year she’s been on the roster, from 14 wins during her freshman year to a 24-2 record this year.

She was second on the team as a senior with 28 goals and led the Rebels with 14 assists. That gave her 78 goals and 63 assists in a career where her teams won 80 of 99 games and never finished short of the region tournament semifinals.

While Harris will play basketball at Utah State, she admitted she’ll miss playing soccer. She thought about bringing her cleats to campus, but once she looked at her schedule she realized there was no time for soccer.

But she’ll bring them back to Logan, Utah, after her next trip home.

“All three of my sports are different but they’re exciting a fun as well,” she said.

Harris didn’t leave her success in the fall — she helped lead the Boyle track team to its second consecutive Class 2A state title this spring. While she didn’t win an individual state title this year, she ended her career with four individual titles.

What impressed Wagner most about her, though, wasn’t a state title or record but what she did when no one was watching. This year, he asked Harris to start throwing the discus, an event she hadn’t done before.

“I look over at the end of April on a Friday after practice, nobody was at the track except for the coaches, and I walk over the hill to the discus, and Emmie Harris is practicing discus for the next hour,” Wagner said. “That will stand out to me as one of the top three moments of Emmie Harris for the simple fact it’s a high school kid, a senior, she’d already won four state medals and she had nothing to prove in the discus.

“She didn’t do that because we said, ‘Hey, you need to work on the discus.’ She did that because she knew that’s what she needed to do.”

Harris went on to finish ninth at the state meet in the discus with a throw of 99-feet, 1-inch. That’s after working on the event maybe twice a week through the season.

“She was one foot away from scoring at the state meet,” Wagner said. “… If it would have been last year’s state meet, she would have gotten fourth or fifth.”

Being a three-sport athlete was taxing upon her time, but Harris knows she couldn’t have accomplished as much in one without the training in the others. And now heading into college, her ability to manage her time between practice, games and school will be vital.

“It kept me busy, especially with academics,” Harris said. “I never had the chance to go home and take a nap. I never got an actual nap like everyone else.”

And while she already said she’ll miss her other sports, she’s excited to see what she can accomplish when focusing on basketball.

“I’m not used to that, I normally get to focus on a sport for four or six months,” Harris said. “I’ll get to see how much I can grow as a player and see all my abilities.

“I definitely feel like I can improve above my abilities. I don’t want to set a bar. I want to keep going until I physically can’t get any better.”

She graduated as the Rebels all-time leading scorer in basketball, totaling 2,525 points. After she set the record in a mid-February win at Madison Southern, Harris didn’t take a break — she averaged 30 points in her final five games.

“She finished her career first in scoring, assists and deflections, and her leadership skills the past few seasons have been so important to the growth of our program,” Edwards said. “I am excited to see what she can accomplish at Utah State. I know their coaches are very happy she is there. I think they got one of the top three basketball players in the state of Kentucky.”

With so many sports to choose from, Harris said she let the sport choose her. She was being recruited by NCAA Division I programs in soccer but found her best opportunity with the Division I Aggies in the Mountain West Conference.

“I had more offers in basketball,” Harris said. “I was getting offers in soccer, but (basketball) was more serious offers, high D1 offers.”

Three sports at Boyle will never be the same without Harris, and that’s both a positive and a negative. While she leaves huge holes to fill for Deem, Edwards and Wagner, her influence will serve as an example for everyone who follows.

“We tell stories of kids that have ran for us in the past,” Wagner said. “All the sudden, it’s, ‘Holy cow, this kid was walking the halls, the same halls I walk through in my high school.’ It’s not some random high schooler in Texas.”

And as for her place in the pantheon of Rebels athletes, Deem has no doubts where Harris ranks.

“I’ve been at Boyle for 21 years and seen a lot of great athletes come through, and I would put my vote on Emmie being the best female athlete since my arrival,” Deem said. “Three-sport athlete, winner in all three sports. There have been a lot of great athletes who have come through who have focused on one sport or two, but to be as successful as she’s been in all three sports … it was special the watch the kid grow up and into the woman she is today.”

Harris above all else

Emmie Harris ended her historic high school career with a spectacular senior season. She scored 28 goals and assisted on 14 as the Boyle County girls soccer team went 24-2 and advanced to their third straight 12th Region championship. During basketball season, she was fifth in the state with 26.3 points per game, and she set the school’s new all-time scoring record with 2,525 points. She ended with a second straight Class 2A track and field state title in the spring.

Brian Baxa didn’t spend too much time in Birmingham, Alabama. And if everything goes according to plan, Baxa won’t spend... read more