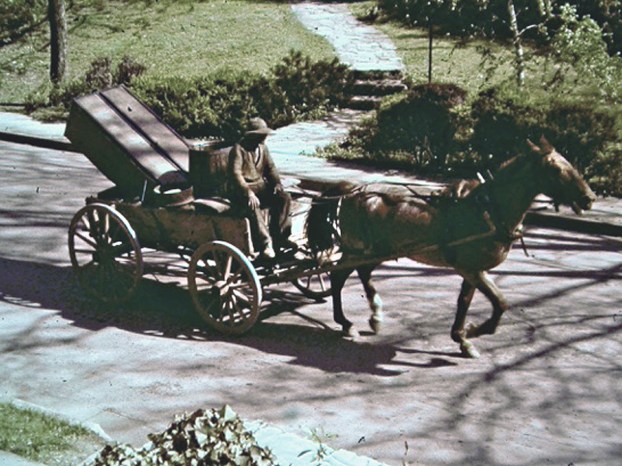 Photos courtesy Boyle County Public Library
Rainey H. Bridgewater used a horse and buggy for transportation and delivery in Danville in the early and mid-1900s.

Looking Back: At Danville’s ‘best blacksmith’

The last known blacksmith and described as the “best blacksmith Danville ever had,” operated his business out of a dilapidated building on Walnut Street between Third and Fourth streets. 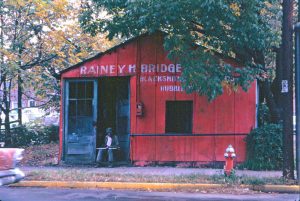 Rainey H. Bridgewater sits in the front door of his blacksmith shop when it was painted red.

He later moved his shop to the Walnut Street site where he spent most of his time to help out anyone needing his services for repair work on buggies, rubber tiring, sharpening plows and cultivators and mowing blades, according to an advertisement in the 1956 The Advocate-Messenger.

He earned enough money to buy two properties on North Third Street. One of the tracts is where the old Bell Seminary stood and where he lived until it was razed because of its condition.

Rainey was the best blacksmith Danville ever had, according to a book written by John Fetterman.

John wrote memories of his old friend whom he and his brother made daily stops on their way home from the Broadway School.

He called Rainey a role model and informal adviser to generations of youngsters who stopped in his shop.

Fetterman was a staff writer for the Courier-Journal and editor of the Sunday Magazine. He was awarded a Pulitzer Prize in 1969 for general reporting about a Knott County man who became a casualty of the Vietnam War.

Fetterman remembers Rainey as “huge, weighing about 230 pounds of muscle. He owned the land his shop stood on, drove a sporty rubber-tired buggy and had a reputation as a ladies’ man.”

He also remembered the wisdom of his blacksmith friend.

“As he crushed his 9-pound hammer on the white-hot iron, he would tell the boys who stopped by, “Even iron wears out finally but a good man never does.”

Fetterman’s last visit was when Rainey was 89 years old, bent over and twisted by rheumatism.

Bill was a professional hospital administrator, in Georgia, also wrote a piece about Rainey.

He spoke through a duck in his article ending by saying,”Always remember Mr. Rainey Bridgewater for he not only worked magic with iron and a hammer. He taught me of life and other important things I would not learn in class.”

Rainey had a fifth grade education, and could read and write, according to Boyle County Census records. He also belonged to the Masons.

In 1910, he was single and a farm laborer and lived in the household of Charles and Della Beard in Danville. 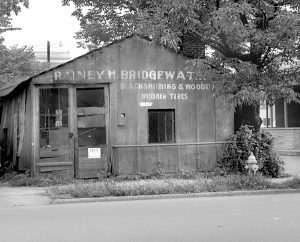 Rainey H. Bridgewater’s shop was on West Walnut Street across the street from The Advocate-Messenger.

He was 45 years old and lived alone, according to the 1920 Census. He was a general worker and had purchased the property by then.

Rainey ran his shop until 1964 when he sold the property on Walnut Street. He moved to Marion County to live with friends.

He was a son of Joe and Susan Dinton Bridgewater of Adair County and was never married. He was survived by several cousins.

He wrote his will Sept. 12, 1970, in Marion County, four months before he died. He left the property to Juanita Tucker, a friend and caretaker.

From Our Files: July 1

100 YEARS AGO — 1917 Dave McGinnis, who lives out on the Lexington road, whose character for truth and veracity... read more