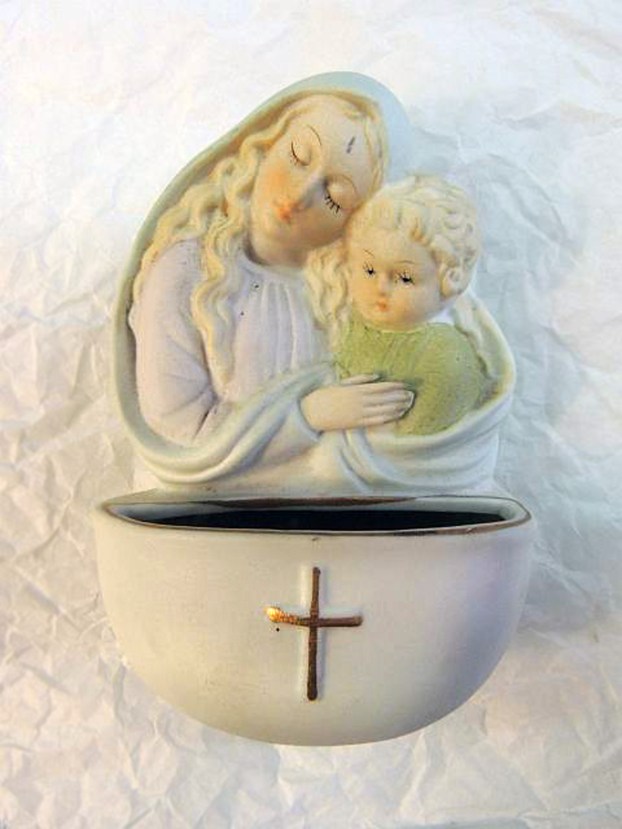 Question: Jerry, what is this? Is it some kind of salt holder, or as someone told me a font for holy water? Do they still make these? It has a sticker on the back that says Napco? Any help you can give me would be appreciated. I picked this up for only a few dollars. Thank you.

Answer: You are correct on the latter. It’s a holy water font. As I understand it, these fonts were kept filled with holy water and you would dip your fingers in to them and bless yourself as you finished your prayers.

I discovered that though many people may buy them, many don’t use them as the water dried up and they found them a hassle to use.

I did see some references to holy salt boxes. I guess that this could be used this way. However, I’m going to hold tight to its being a holy water font.

Indeed they still do make them. There is an active business for them from various companies. This one was made in America in the 1950s – 1960s. Napco started out as the National Potteries Corporation in Bedford, Ohio, in 1938. Napco was so prolific that its actually held collector’s attention. They made huge lines of just about everything that you can imagine.

In 1986 the company, after purchasing several other companies, moved its operations to Jacksonville, Florida, where they still operate.

Though it’s an American company, at times you can find the mark “Made in Japan”, as late in their career they subcontracted out some decorating work in Japan.

I think that your piece is charming and very delicate with the closed eyes of the Virgin Mary and the open eyes of Jesus. It’s softly colored and pretty, but I’m afraid that many people, unless they are very devout, find them too “churchy.”

Still it’s by a collectible company and I think that it would be priced at about $15 in a retail setting. Thanks for a great question.

I like to think that I know what my impact is on the environment. Don’t get me wrong — I... read more