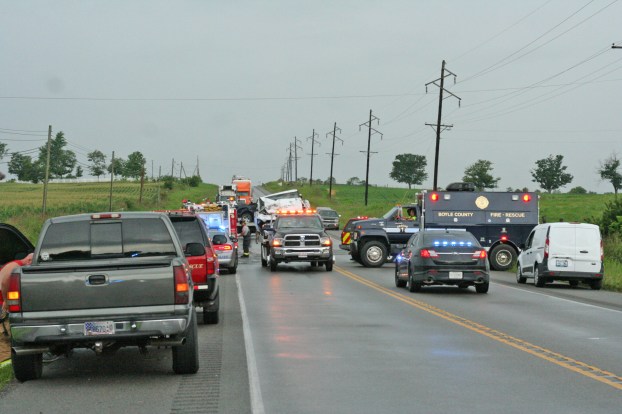 Kendra Peek/kendra.peek@amnews.com
One person died in a two-vehicle crash on Perryville Road on Thursday.

One dead after crash on Perryville Road

This story was updated July 6 with the name of the woman killed in the wreck.

A Parksville woman has died after a two-vehicle wreck on Perryville Road in Boyle County Thursday afternoon. Another person was injured and taken to a hospital.

The wreck occurred around 2:15 p.m. near the intersection of Perryville Road and Salt River Road. A driver who has not been identified was driving east on Perryville Road in a black truck when, according to Boyle County Deputy Kyle Lyons, it is believed the driver may have dropped off the edge of the road. The driver may have then over-corrected and crossed the center line, hitting a white truck driven by Wethington head-on.

Lyons said Thursday afternoon it was too early to know for sure what happened. The driver of the black truck was in stable condition, but unable to talk to deputies at the scene, he said.

Heavy rains and wet roads are believed to be a main factor in the crash, Lyons said.

The road remained closed for about two hours while deputies, Boyle County EMS and the Boyle County Fire Department worked the scene.

Kentucky State Police’s accident reconstruction team was requested, Lyons said, but it did not come because the crash did not meet their criteria. A detective from Danville Police Department was expected to reconstruct the wreck later.

The crash was near where a one-vehicle wreck occurred on July 4. That wreck sent a captain at Northpoint Training Center to the hospital.

Currently under construction, a walk-in urgent care clinic is slated to open this fall in Danville, at 1591 Hustonville Road.... read more