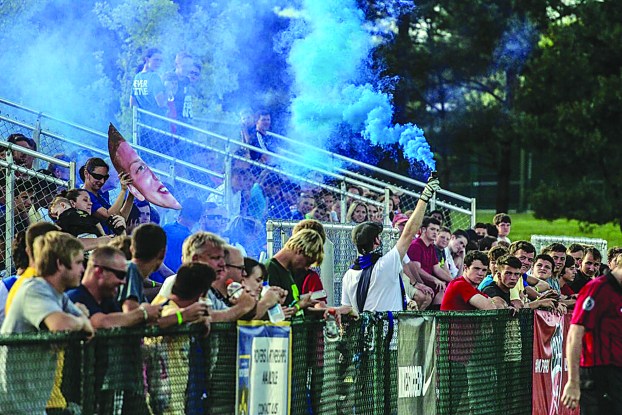 Submitted photo For the fourth straight year, the Centre men's soccer program will host a professional soccer match on campus when the Nashville SC and Derby City Rovers play at 7 p.m. Wednesday.

Soccer fans are in for a treat Wednesday when two professional teams battle on the new Centre soccer stadium, Andrew P. Amend Stadium. For the fourth straight year, the Colonels will entertain two PDL teams when Nashville SC and Derby City Rovers play at 7 p.m.
“It’s obviously pretty exciting in general for the community to get a game like that,” Centre men’s soccer coach Jeb Burch said. “… (Derby City) fan club will bring smoke, they make a pretty fun little event out of it.”
But Burch also said the game is only part of the purpose of having the two professional teams in town. Coaches will also get time to learn as a part of the Colonels soccer camp, which runs Tuesday through Friday.
“It’s an educational piece, as far as the camp is concerned and our coaches,” Burch said. “… One piece to the camp is tactical analysis, so the Rovers coaches meet with our coaches before the game and then after the game. They do a tactical analysis of the game, what they were trying to do and any changes they made.”
The game will also introduce the new soccer facility to the public. Burch is excited to see what high-level players can do on the new surface.
“It’s a great field, that’s obviously the thing I’m most proud of, it’s has a lot of bells and whistles to it, but it’s a great playing field,” Burch said. “For a pro-level type game like that to get on a field like that, it’ll be a good game to watch.
“I’ve always been around good players, and when good players get on a good field, it seems like it elevates everything they’re doing. You get a PDL game at night with a good crowd, the atmosphere alone will make it good to watch.”
Nashville (7-2-4) is in second place in the South Atlantic Division. Nashville is eyeing a move up to the United Soccer League, and due to that, Burch said the roster is loaded with talented players hoping to make that move as well.
Two Centre alum, Jacob Haddad and Patrick Ferrell are on the Nashville roster. While Burch doesn’t expect to see them play too much, it’s still a feather in the Colonels cap to have them on the roster.
“It’s great for those guys because they’re training with really good players all summer,” Burch said. “Once they go to USL, all those good players will try to make that jump and that will clear up that roster a little bit, so if my guys wait their turn, they’ll probably play next summer on the PDL team.”
The Centre connections don’t stop there — Colonels assistant coach and alumni Robbe Tarver is the Rovers head coach.
Recently, Tarver accepted a position as a volunteer assistant coach at the University of Louisville. He’s one of ten former Centre players to coach in the college ranks, including Burch and Centre women’s soccer coach Jay Hoffman.
“It was always a goal of mine when I started coaching,” Burch said. “(Former Centre athletic director) Brian Chafin gave me a great opportunity and I always said when I was a head coach, that’s what I wanted to do for other players. It certainly has branched out from there.
“I don’t have a magic wand for that. I give players the opportunity and they’re the ones who make it happen.”
Tickets for Wednesday’s game cost $12 for adults online and $15 at the gate; children ages 6-18 are $5; and children ages 5 and under are free. Tickets can be purchased at the Rovers online store.

Last year was an historic season for Casey County football to be sure — four team records were set in... read more