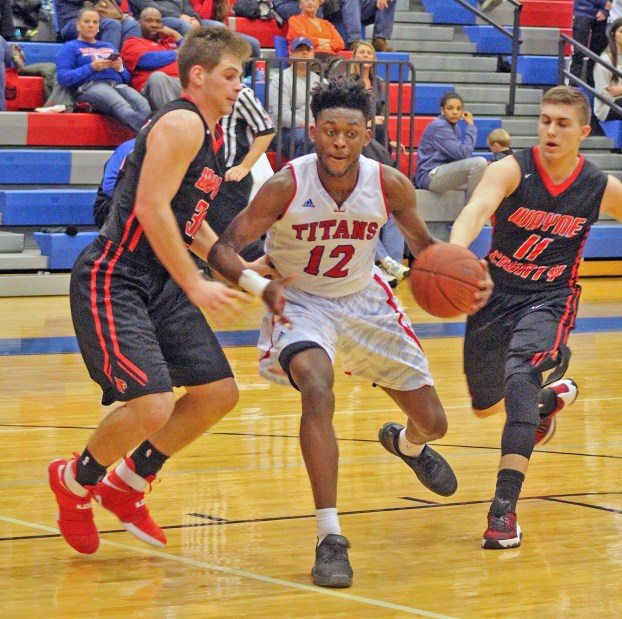 A big summer is getting bigger for a group of Mercer County boys basketball players.
Senior Trevon Faulkner, junior Carter Baughman and sophomores Kaelin Drakeford and Jamisen Lewis have been invited to the Georgetown College Elite Camp at the beginning of August.
“That’s the one thing these four guys know, they’re not satisfied with being invited to an Elite Camp,” Titans coach Josh Hamlin said. “It’s great, but they want to go and prove how good they are. These Elite Camps and July AAU sessions are great because they need exposure.”
Hamlin said the Titans played a competitive summer schedule against region champions and teams expected to compete for state titles.
“We exposed our guys to some of the things they needed to work on and we did work on them,” he said. “This July AAU session and Elite Camps are great because it allows them to play against someone else and let’s them see how the measure up.
In the Titans first KBA game of the summer, Drakeford dropped 26 points and 11 rebounds. Hamlin said he’s been their second leading scorer through the summer.
“I don’t have enough words to describe the development of Kaelin over the summer,” Hamlin said. “He’s been one of our best players. He’s got contacted about coming to NKU’s Elite camp, Charleston University in West Virginia, their Elite Camp.
“He’s continued to grow. He’s always in the gym putting in work. This is a really good honor for him.”
During his freshman season, Drakeford averaged 2.6 points and 1.5 rebounds in 24 games.
Lewis is listed at 5-foot-7, and Hamlin said that causes many teams to overlook the guard. However, Lewis has proven that to be a mistake this summer.
“People are deceived by that. Jameson is so, so tough,” Hamlin said. “He was one of our best post defenders, could really shoot it, handled the ball, so it’s good to see him get recognition. When he steps on the floor, people don’t always take him seriously because of his size, but the size of his heart over-matches his size and height.”
Baughman played in 29 games last season, averaging 5.0 points while hitting 16-of-39 3-pointers and 41-of-52 at the free throw line. Hamlin said the junior has gained the interest of college coaches while being invited to other Elite Camps.
“Carter does a lot of the little things that go unnoticed in the box scores,” Hamlin said. “He handles the ball really well, makes big shots, makes big free throws. Carter’s game has really improved over the summer.”
And then there’s Faulkner, widely considered to the be the best player in Kentucky — last year.
The senior already has Division I college offers after averaging a double-double as a junior, 24.2 points and 11.9 rebounds. And while his talent is obvious, Hamlin said that’s only part of the story on Faulkner.
“Everybody that shows up on Friday night in football season or Tuesday and Friday in our season, they look and they say, ‘Man, that’s an exceptional athlete.’ He’s very gifted, but people don’t understand the work Trevon puts into it,” Hamlin said. “I don’t know how many times throughout the year I’ll get a text message, ‘Hey, can I borrow the keys to get in the gym.’
“Trevon doesn’t have a Twitter, he doesn’t do it for the attention. Trevon is genuinely a great kid who deserves everything he’s gotten and what he’s going to get in the future.”

Soccer fans are in for a treat Wednesday when two professional teams battle on the new Centre soccer stadium, Andrew... read more