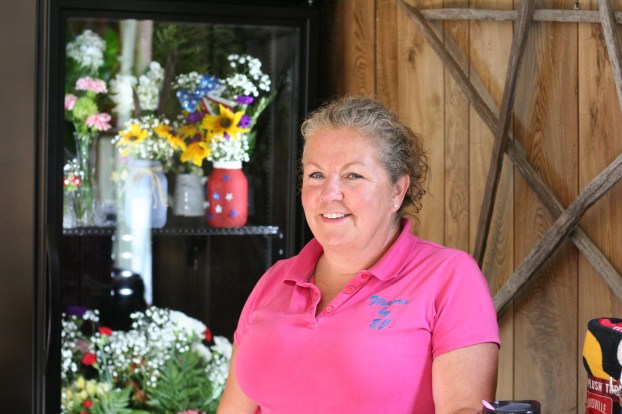 Kendra Peek/kendra.peek@amnews.com Jenny Gibson of Perryville, has become a plant aficionado and a full-time farmer.

Perryville resident Jenny Gibson has spent her life bringing beauty to the world — in the form of flowers.

“I’ve never seen anyone look at a flower and not like it. A flower, to me, is like a smile,” Gibson said, breaking into laughter. “I know that sounds corny.”

She was born in Batesville, Indiana and grew up in Covington, then moved to Lexington with her mom. In the mid-1980s, she made her way to Burgin, where she lived with her first husband and their two daughters.

It was there, while living in Burgin, that Gibson got started growing plants with a friend Ann Gautier. They would raise tobacco plants in greenhouses for someone else who allowed them use of a smaller greenhouse for flowers. After a few years, that opportunity ended and they were looking for a new location to raise the flowers that had been started in the smaller greenhouse.

It was around 1993, which is when Gibson moved with her daughters to a farm near Perryville, when she was remarrying.

Another friend was selling a greenhouse she had built, so Gibson and Gautier bought it, and moved it to her farm.

The time growing plants led her to a chance to work for Key’s Nursery and Landscaping, where she stayed about 10 years.

“I learned tons of information on shrubs, bushes, trees, when to dig them, when to plant them, when to prune them, all of that kinds of stuff,” she said. “I had to leave because we had just bought a new stallion.”

In 2006, after leaving Key’s to stay home and take care of their horses, Gibson got her business license to start selling plants from the farm. She continued growing flowers for Key’s, which she still does to this day.

She named the business Flowers by EJ, named after her second daughter, Ella Jean, who would frequently help in the garden when she was younger.

“She had long brown hair and ponytails. We would pot plants, put them in the dirt. I said, ‘If I ever have me a flower business, I’m going to name it after you,’” Gibson said. “Everyone thinks it’s named after me.”

Besides Ella Jane, Gibson has two other daughters, two step-sons and seven grandchildren, some of whom she keeps on a regular basis. Being a grandmother is “pretty great,” Gibson said.

Eventually, she was so busy with the flowers, she had to build a larger greenhouse — replacing the smaller one with a 40-foot space. In the fall of 2007, after the passing of her mom, Gipson was contacted to help grow flowers for the Heritage Hospice yearly sale. They needed a lot of inventory, eventually prompting another greenhouse.

That time, she said, was more than the growing of the flowers — it was a time to help her get over the loss of her mother. 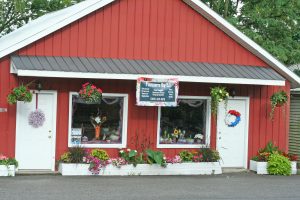 Kendra Peek/kendra.peek@amnews.com
Jenny Gibson of Perryville, has become a plant aficionado and a full-time farmer. She can be found during the week at her shop on Merchants’ Row in Perryville, Flowers by EJ.

She was also selling plants straight from her farm, but in April opened a storefront for Flowers by EJ on Merchant’s Row in Perryville, at 402 South Buell Street.

“A lot of people talked me into coming here,” she said. “I really never thought I would open a retail business.”

The space was formerly used to sell produce, and people have continued to stop and ask about that so Gibson has brought some of the produce grown at her farm to sell. She’s also brought some from a produce auction in Lincoln County.

“The need seems to be there,” Gibson said.

“I hope I get to stay here forever. I love this little spot,” Gibson said. “I’m here for the people.”

Gibson said, she likes adding that personal touch to flower arrangements for people — she asks questions and learns about the person who has passed, such as the cases for casket sprays, so that she can make sure the flowers truly honor the person.

Gibson invites people to come by and talk to her, use her years of farm and landscape knowledge to their benefit.

If she doesn’t know it, Gibson said, she’ll find out.

Sometimes people also bring her seeds to start for them. And people can pre-book what kinds of plants they want for their homes — Gibson will start them in pots in her greenhouse and have them ready for Mother’s Day and other holidays. She also makes garland for the Christmas holidays. She takes orders via Flowers by EJ on Facebook, or phone or text at (859) 329-9576. 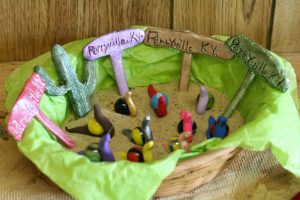 Kendra Peek/kendra.peek@amnews.com
“Extras” for fairy gardens can be found at Jenny Gibson’s store in Perryville. Snails are made by Gibson and one of her biggest sellers.

She’s also making plans to offer workshops for children and adults, such as a build-your-own fairy garden one coming up at 2 p.m. on July 22. The cost is $25 in advance and it’s the first of monthly workshops Gibson plans to host. There’s a kid-center in her shop, where kids can play in the sand.

The farm life has impacted her daughters, who are now grown. One loves riding horses, another grows chickens and sells the eggs at the store, as Auntie M’s Eggs.

Gibson prefers perennials, as far as flowers go. Over the years, she has learned a thing or two about annuals, too, joking, that learning about them was “sort of against my will.”

“You can divide them, you can cut them and reroot them, you can get the seeds — it’s just endless,” Gibson said. “They’re fabulous for plant-loving people like me.”

Before moving to Perryville, Gibson had never really lived on a farm.

“I wasn’t ever around farm animals or anything. My mother and my grandmother neither one could grow plants,” she said.

Her dad was raised on a farm, and his parents sold tomatoes and eggs.

“My mom, when she was pregnant with me, was picking tomatoes,” Gibson said. “She spent that summer picking tomatoes on the family farm … Once I was born, I was raised in Covington.” 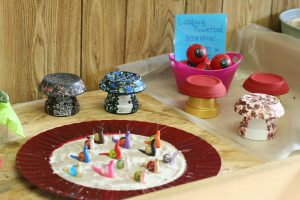 Kendra Peek/kendra.peek@amnews.com
“Extras” for fairy gardens can be found at Jenny Gibson’s store in Perryville.

She moved to the farm in anticipation of getting married to Dwayne Gibson, who she met thanks to Gautier, their mutual friend.

“I’m a spiritual sort of person. Me and my husband always say we saved each others’ lives.”

Being there was a new experience for her; Gibson fell in love instantly.

“It was just so fabulous,” she said. “I was amazed. I was really amazed. I wanted to absorb as much in as possible. I slipped into the role of nurse and midwife of horses so easily; working cows. It was like another person that I never knew existed.”

So in love with the farming, Gibson even went to Midway for a year to study equine.

“I did that for a year, but I couldn’t do that raising three daughters,” she said.

She said the information she learned has helped greatly while raising the couple’s American Paint Horses. They have 50-60 horses on their farm. They also raise cattle and hay, as well as the produce and the flowers. All together, they have 120 acres.

Farming, Gibson said, is now a way of life for her.

“It’s my passion. That’s the best way to describe it,” Gibson said. “I truly believe it’s my gift from God. They say God gives everyone a gift.

Many questions are looming about how 911 service will be provided within the various jurisdictions inside Boyle County in the... read more