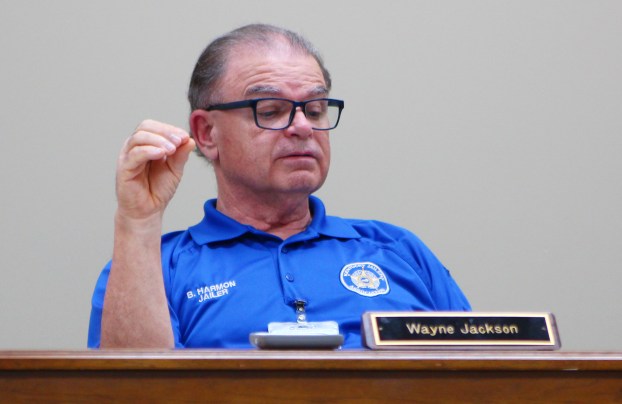 Ben Kleppinger/ben.kleppinger@amnews.com
Boyle County Jailer Barry Harmon participates in a joint jail meeting in May. Harmon said Tuesday that the Boyle County Detention Center reached a peak population of 409 inmates in early July, over the weekend prior to Independence Day. That prompted the jail to send nine inmates to Casey County to alleviate some of the extreme overcrowding.

Boyle County Jailer Barry Harmon said the jail population peaked at 409 over the weekend before Independence Day. He said the area went without district court hearings for two weeks, which helped contribute to the overcrowding. Now that court has started back, the numbers have started falling.

Harmon said the jail had 371 inmates on Monday. That’s still somewhat elevated from the 350-360 the jail often has, and far beyond the facility’s stated capacity of 220.

The jail has 80 beds dedicated for “controlled intake” inmates from the state, leaving 140 beds for its general population. At the July peak then, the jail had 329 inmates in its 140-bed general population space — more than 200 percent of capacity.

The jail also topped 400 inmates in February, when it hit 402. At that time, 15 prisoners were sent to Casey County and work was begun on a cooperative agreement between Boyle and Casey for future population problems.

Harmon said Boyle will similarly take inmates from Casey County when the situation is reversed. The inmates selected to be moved are always ones without medical issues or other problems that would over-complicate the process, he said.

This time, five of the inmates sent to Casey County were from Mercer County and four were from Boyle County. The Boyle County Detention Center operates as a joint jail facility for Boyle and Mercer counties.

Harmon said those nine inmates were still being housed in Casey County on Tuesday and would remain there until Boyle’s population falls enough that it no longer has to house inmates in the jail’s recreation area.

Harmon said as many as 20 inmates at once have been housed in the recreation area, which is a problematic solution to overcrowding because there aren’t any bathrooms in the space so guards must constantly escort inmates to areas of the jail with bathrooms.

“It just causes a lot of traffic flow,” Harmon said.

Having inmates in Casey County creates extra work for Boyle and Mercer counties’ sheriffs, because they have to drive the extra miles to transport the inmates for court appearances, Harmon noted.

While county jails around the state are regularly overcrowded by large percentages, Harmon said the state keeps its own facilities at “101 or 102 percent” and sends the rest of its inmates to the local facilities.

The state does pay the jail to house its inmates, but Harmon said he would prefer to have the beds freed up than get the money.

Boyle and Mercer counties are attempting to address one of the suspected causes of the jail’s population growth — a drug epidemic — with a new intensive outpatient program that lets inmates out if they participate in counseling and rehabilitation; take classes; find a job; and/or volunteer in the community.

Harmon said there are currently “fewer than 40” former inmates participating in that program, which is run by Shepherd’s House. The maximum capacity is 60.

That outpatient program hasn’t yet had a noticeable impact on the jail’s overcrowding because it’s more of a “long-range” program that “targets recidivism,” Harmon said.

Perryville resident Jenny Gibson has spent her life bringing beauty to the world — in the form of flowers. “I’ve... read more