Sheene (dramatic interpretation) and Hall (oratory) advanced through six preliminary rounds, the National Octofinals, and the National Quarterfinals (featuring the top 30 performers in the country), before being eliminated from the competition.  Additionally, in the supplemental events for students eliminated prior to the final rounds, Hall advanced to the Quarterfinal rounds (top 24) in Storytelling.

“The National Tournament showcases the brightest and most talented students in the country,” said J. Scott Wunn, Executive Director of the National Speech & Debate Association. 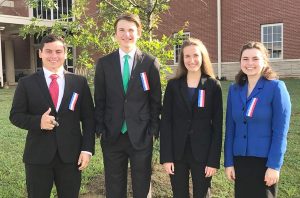