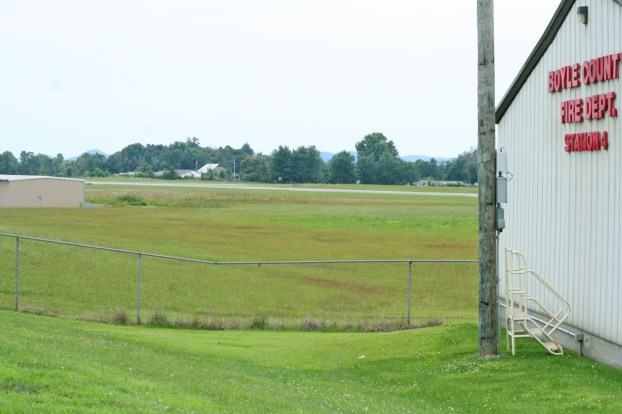 Kendra Peek/kendra.peek@amnews.com The field at the Danville-Boyle County Airport, behind Boyle County Fire Department Station 4, is the future home to a 10-bay hangar, for which the airport received a $686,210 grant.

Grants to fund construction of new T-hangar at Boyle airport

Two grants totaling more than $750,000 from the Federal Aviation Administration and the Kentucky Transportation Cabinet, Department of Aviation, will be building a new hangar at the Danville-Boyle County Airport, located at Stuart Powell Field, east of Junction City.

“Our airport is growing,” said Stuart Powell, chairman of the board and namesake of the air field.

The 10-unit T-hangar, to be located behind Boyle County Fire Department Station 4, will be able to house 10 planes. It’s called a T-hangar, Powell said, because each unit will be T-shaped, to reflect the shape of a plane from the top; each unit also has its own entrance.

Powell said there were 22 people on the airport’s waiting list for a hangar space.

“We do the best we can,” he said. “Our airport is getting to be a well-known airport in central Kentucky.”

In fact, Powell said, it’s “one of the leading general aviation airports” of its size in the country.

This is not the first grant the airport has obtained over the years, but one of many, including one that paid for the administration and lounge building at the field.

“I must say, we have been quite fortunate over the years,” Powell said.

Another recent grant is a $789,000 grant from the state for the construction of another corporate hangar. It will hold three to five planes, depending on their size. It will be a large open hangar, with one door.

Powell said the multiple grants show that general aviation is gaining in popularity.

“General aviation is now coming into its own as an everyday use. Airplanes are more complex, safer and better. A lot of people are learning to fly,” he said. “Worldwide, air travel is getting more popular.”

For corporations, having smaller jets is becoming more convenient than having to fly their executives via commercial airplanes as well, because they can visit multiple locations in one day and be back home by night.

The field also offers timeshare-type rentals of hangars, which allows for the sharing of crews, maintenance and more. The Danville-Boyle County Airport also recently added a new fuel system, he said, which is getting a lot of traffic at the airport.

All together, it means things have changed.

“It’s a different world than it was 10-20 years ago. General aviation is growing in leaps and bounds,” Powell said.

The aviation industry is one of the largest industries in Kentucky, according to the Cabinet for Economic Development, and the central location of the Danville-Boyle County Airport makes it a popular one in the state for corporations, Powell said.

The benefits, he said, go beyond the airport.

“We’re benefiting at the airport. The community is benefitting,” Powell said, sharing that the visitors to the airport generally visit neighboring towns to eat, sometimes sleep, and to do business.

With the completion of the new 10-unit hangar and the new corporate hangar, Powell said the airport will be practically self-sufficient, thanks to the option to purchase fuel at the airport. He said there’s several projects in mind for the future of “our airport,” and was quick to point out that the airport is for Boyle and surrounding counties.

“It serves every facet of this community and surrounding communities,” Powell said. “We’d like to build more … the airport is growing.”

An engineer who studied the costs behind Danville’s sewer system is recommending rate increases and a rebalancing so that different... read more