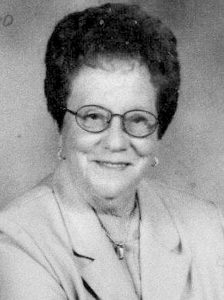 Marjorie Kathleen McGuire, 85, of Hustonville, KY passed away on Monday, July 10, 2017 at Fort Logan Hospital in Stanford. Born February 11, 1932 in Danville, KY to the late Roy Lowell Bryant and Eunice Johnson Bryant, she worked as a homemaker for most of her life, loved her animals, and enjoyed gardening. She was also a member of Parksville Baptist Church.

In addition to her parents, she was preceded in death by a husband, Mike Moody; and three children, Gerald Dewayne Warren, Carolyn Warren, and Millard Stuart Warren.

Visitation will be Thursday, July 13, 2017 at Spurlin Funeral Home Chapel, Stanford from 5-8 p.m. Funeral service will be 1 p.m. Friday, July 14, 2017 at the funeral home with interment following at Bellevue Cemetery in Danville, KY. Casket bearers will be her grandchildren.