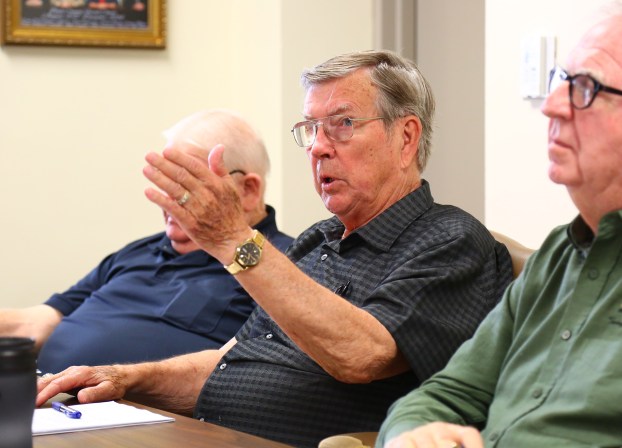 Ben Kleppinger/ben.kleppinger@amnews.com Boyle County Magistrate Jack Hendricks states emphatically Tuesday morning that the county will follow through on its plan to fund a major upgrade of Danville’s 911 dispatch center.

Danville shouldn’t worry about whether Boyle County will pay for an estimated $500,000 upgrade to the city’s 911 dispatch center — that funding has been allocated and will be provided, Magistrate Jack Hendricks said this week.

“The city keeps saying that they’re worried about getting that money,” Hendricks said at Tuesday’s Boyle County Fiscal Court meeting. “… We have done allocated that money and there’s no reason to continue carrying on a conversation — the public is sitting here wondering what’s going on?

“… It’s just a matter of giving them the money once the bids and everything have been let — and that hasn’t even been done yet.”

Danville is planning to upgrade its 911 service this fiscal year with new computer-aided dispatch (CAD) stations that will be able to do things like accept text messages and video calls. The cost of the new equipment has been estimated at $500,000 but bids have not been taken yet.

Boyle County Information Technology Director Bill Nichols said the latest timeline he has seen for the project has a completion date in April 2018.

Currently, Danville’s dispatch center handles all 911 calls placed in Boyle County. But some officials are looking into the possibility of using Bluegrass 911 in Lancaster to handle 911 calls for Junction City, Perryville and the unincorporated portions of Boyle County, effectively splitting away from Danville. 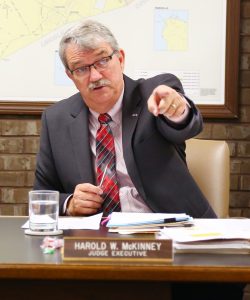 Asked last week what would happen to the $700,000 in 911-earmarked funds under such a scenario, Boyle County Judge-Executive Harold McKinney said he didn’t know yet.

Danville City Manager Ron Scott said he believes all $700,000 must be spent on the Danville 911 center because that was the dispatch center servicing the area when the fees were collected from residents.

At Tuesday’s meeting, Magistrate Patty Burke asked if the county did decide to get dispatch service from Bluegrass 911, what would happen to money the county has “allocated” for 911 service.

“Is there a chance we would pull that money out?” she asked.

“There’s a chance that Danville would go with us to Bluegrass. There may be some financial incentives on that,” said McKinney, referencing the possibility of state incentives for regionalizing 911 dispatch centers.

Later in the meeting, Magistrate John Caywood returned to the topic, asking, “Whose money is it?”

“The money is collected through a fee system and it’s collected to provide dispatching to the citizens of Boyle County. That’s what that E911 money is for,” Boyle County Treasurer Mary Conley said.

“The better, easier way to look at it is we have custody of the money,” McKinney said. “The question is how can it be allocated and spent?”

“We have custody of it and what I would hope is no matter what we do, we go forward in a cooperative venture with the city,” McKinney said. “… Ultimately, we live with the city, we’re here. And I don’t want to do anything to damage them, but I think the question is: What are our legal options? That’s the first question that needs to be answered.”

Conley added that conflicts over 911 funding are a recent development.

“I’ve been in this job for 25 years and … there’s never been any insinuation that (911) wasn’t funded properly,” she said. “… It’s always been a very cooperative effort and everybody has been very agreeable through the 25 years I’ve been here.”

Caywood said he believes the issue may not be money as much as it is the dispatch service.

Hendricks also questioned whether Boyle County should remove from its budget $105,000 that it agreed to provide to Danville for implementation of “emergency medical dispatch” services at the 911 call center. That’s because Danville removed the plan to add EMD services from its budget for the current fiscal year.

The city had been planning to spend up to $300,000 — which the county’s $105,000 would be a part of — to add EMD service, which allows dispatchers to stay on the line with callers and provide instructions on how to care for someone having a medical emergency.

Magistrates voted to hold the $105,000 and not pay it out until further action of the fiscal court.

McKinney said Tuesday that Boyle County needs to continue looking into “where we’re going to get our dispatch from.”

He said safety of first responders is a primary concern.

“You’ve been in police work,” McKinney said to Hendricks. “You know that there’s got to be status checks on these guys if they’re dispatched. And I think we owe a duty to our first responders and the citizens of Boyle County to provide the best dispatch services we can.”

McKinney said he thinks members of the fiscal need to go over to Bluegrass 911, either individually or as a group, which would require a special called meeting, and ask any questions they have.

“You need to go over there and have your questions answered,” he said. “That’s the best way to do it.”

“Why can’t we meet with Tony Gray and the city manager and these people and find out why that we’re secondary on all calls?” Sammons said. “That’s ridiculous. That is one reason I’m interested in moving or starting our own or doing something.”

McKinney reiterated his call that magistrates do some more studying and find answers to their questions.

Hendricks said he feels county first-responder departments such as the sheriff’s office and Boyle County EMS are left out of discussions about potential changes at the dispatch center. And he seemed to take issue with Danville City Manager Ron Scott speaking about the dispatch center situation.

“Talking about it through the city manager — that’s not the thing to do,” Hendricks said. “(Danville Police) Chief (Tony) Gray is in charge of the 911 center. If there’s an issue that anybody has, I think we ought to be going and sitting down with him.”

Hendricks said he wants to see the various problems with 911 worked out sooner than later.

“Right now, we’re a ways away from being able to get anything done with another 911 facility. We need all this stuff laid out. We need an interlocal agreement — obviously — that we’ve never had and we’ve talked about for years. Those things need to be answered because we’ve got people at risk out here,” he said. “If there’s conflict, it needs to be squared away immediately. Not six months or a year from now, not changing to Bluegrass — it needs to be resolved now, because if we get somebody hurt because of a conflict at the 911 center, that’s ridiculous.”

A decade after leaving Danville, Starbucks is planning to return. The global coffeehouse chain is constructing a new location along... read more