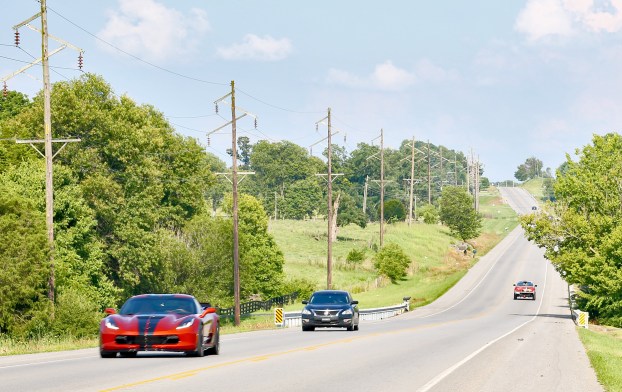 A Boyle County magistrate wants something to be done about the “race track” that is U.S. 150 between Danville and Perryville.

“Anymore, that’s becoming a residential area. Not only because I live on that road and I’m concerned, but there’s so many other people,” Sammons said. “I’m getting calls all the time or people stop me that live on Perryville Road that they’ve either been hit, they’ve been in an accident, or they’ve been real close to somebody running over them, rear-ending them, passing them on yellow lines — this and that.

“… There’s got to be something done.”

Sammons noted the fatal wreck that occurred along Perryville Road last Thursday as a recent example of how dangerous the road is.

Betty “Sue” Gayle Wethington, 53, of Parksville, was killed in that wreck when two trucks collided head-on during heavy rains.

According to emergency officials, the driver of a black truck is believed to have traveled off the edge of the road before coming back onto the roadway and colliding with Wethington’s truck.

“We’ve had multiple wrecks. My wife has been hit,” Sammons said. “… What can be done? We don’t have any signage — I don’t know what we need.”

Sammons said he would like to see more law enforcement from the sheriff’s office and asked Sheriff Derek Robbins if deputies could begin arresting people for reckless driving.

“Don’t give them a ticket just for speeding, give them a reckless driving ticket,” Sammons said to Robbins.

Robbins said citing and arresting people “depends on what the circumstances are” for what they are charged with.

Sammons asked County Attorney Lynne Dean if people with speeding tickets come before her and if something can be done to give them a “stiff penalty.”

“It depends on what the speeding charges are,” Dean said. “Some of those are prepayable and I would never see them.”

“We need something with a stiff penalty,” Sammons said. “I don’t know what we can do, but I’m afraid somebody else is going to get killed and I’m afraid it’s going to be me.”

Judge-Executive Harold McKinney said he and County Engineer Duane Campbell “have it on their list” to talk about when they meet with Transportation Cabinet engineer Bret Blair. That meeting is set for today, July 12, McKinney said, and Perryville Road will be among the topics they discuss, as well as the turning-lanes project at U.S. 150 and Chrisman Lane that officials hope to get funded in the next state road plan.

“It’s a staff meeting is what it amounts to,” McKinney said of the meeting with Blair. “… Frankly, we always use it as an opportunity to start planting seeds and saying, these are some things that need to happen in Boyle County.”

Sammons said part of the problem is “too many idiots on cell phones texting and trying to drive.”

He said he was recently “almost hit” by someone who was texting and driving.

“I laid down on my horn real loud and then put my arm out waving and he finally got it under control — and passed me on the wrong side,” Sammons said. “I was cussing him like a sailor. (We) pulled over and he gets out and he’s a great big guy and if I’d had my pistol, I’d probably have shot him.”

That comment elicited a lot of cross-talk in the meeting, but Sammons continued: “He did stop and he got out and he apologized.”

“It’s hard to engineer around driver inattention; it’s just hard to do that,” McKinney said. “But we’ll get it on the agenda.”

“I’d like for our little sheriff to send more people out there and do some arrests — I mean, stop some of these people,” Sammons said. “Moving right along — that’s all I have.”

“Are you going to need a step-ladder to get down off that high horse?” McKinney joked.

“If the reporter wasn’t here,” Sammons joked back, “I’d tell you how I really feel.”

Danville shouldn’t worry about whether Boyle County will pay for an estimated $500,000 upgrade to the city’s 911 dispatch center... read more