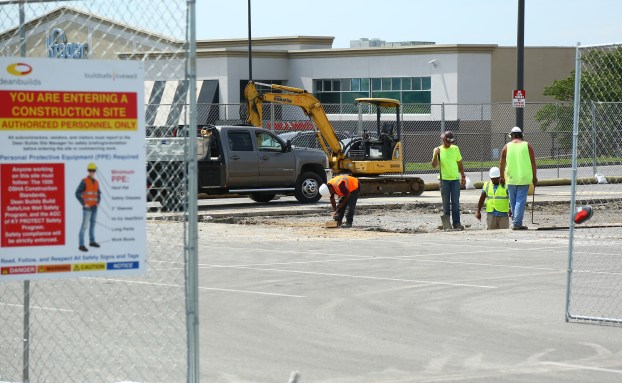 Ben Kleppinger/ben.kleppinger@amnews.com Work is done Monday afternoon on the location for a new Starbucks coming to Danville. Fencing at the site had been up for weeks, but official word on what was being built in the parking lot in front of Liquor Barn was not released until Wednesday afternoon.

A decade after leaving Danville, Starbucks is planning to return.

The global coffeehouse chain is constructing a new location along the South Danville Bypass, in front of Liquor Barn.

“We are happy to confirm that we will be opening a new drive-thru location,” a Starbucks spokesperson said Wednesday. “The store is tentatively set to open early next year.”

Rumors and speculation about what would be going in front of Liquor Barn have been flying for weeks. Fencing was put up around the space and construction began without a public announcement of what was being built.

Jody Lassiter, President and CEO of the Danville-Boyle County Economic Development Partnership, said the EDP has been assisting on the Starbucks project with the property owner, Viking Partners, and utility service providers since February 2016. The project had the public codename “Project Washington.”

“Starbucks has long continued to be one of our top consumer requests in the community,” Lassiter said. “The previous Danville store was unfortunately caught in Starbucks’ 2008 corporate decision to close 600 stores when consumer spending dropped during the national economic downtown. Since then, Starbucks’ corporate leadership has turned the company’s fortunes around and opened the door to develop new store locations, including a return to Danville.”

The old Starbucks building is still standing less than a mile to the east, off the bypass on Brenda Avenue. It has been unoccupied since Starbucks left.

The Starbucks spokesperson said more specifics about the opening date would be available “in the coming months.”

The new fireworks ordinance for the city of Danville seems to have made an impact in its first Fourth of... read more