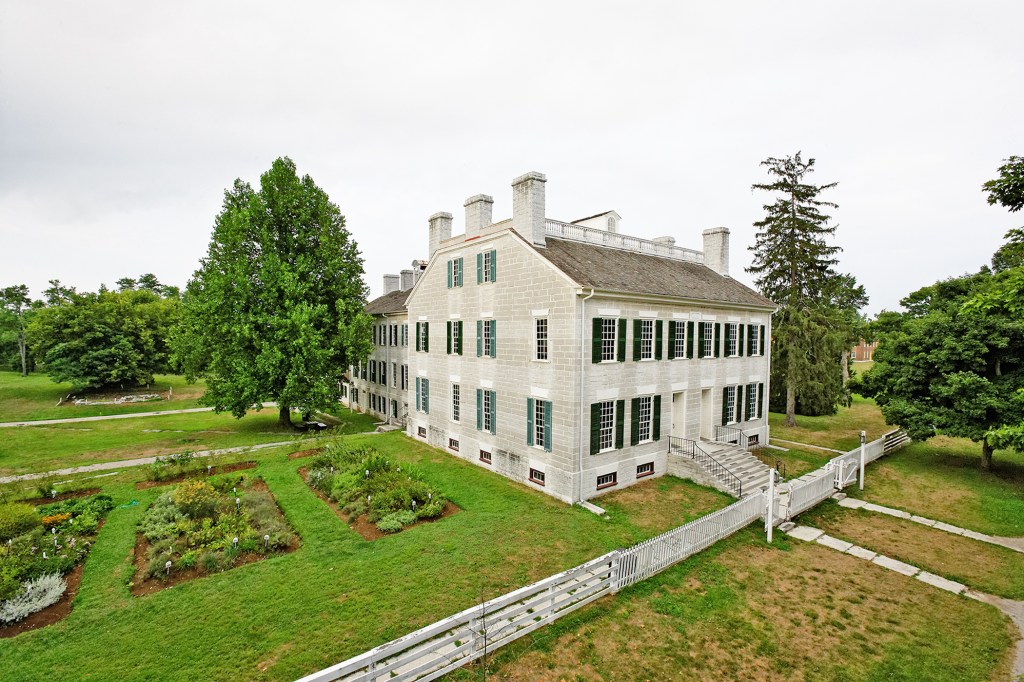 Photo courtesy of Shaker Village of Pleasant Hill The Centre Family Dwelling at Shaker Village will be undergoing renovations, along with the Meeting House, later this year thanks to a $5.1 million grant from the Lilly Endowment Inc. 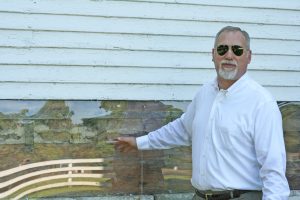 Kendra Peek/kendra.peek@amnews.com
William Updike, vice president of facility management at Shaker Village, explains the different types of materials used to build the Meeting House at the Village, as seen through a plexiglass-covered opening on the building. The Meeting House and the Centre Family Dwelling will be undergoing renevations this year thanks to a $5.1 million grant from Lilly Endowment Inc.

Later this year, two iconic buildings at Shaker Village of Pleasant Hill will undergo renovations thanks to a $5.1 million grant from the Lilly Foundation Inc.

“We expect to spend all of that by the time we’re done,” said William Updike, vice president of facility management at Shaker Village.

The money, awarded in 2016, will be used to restore the Centre Family Dwelling and the Meeting House, both in the center of Shaker Village.

Both buildings were built to replace earlier buildings that were destroyed or taken down. The village began to realign around the time the two were constructed from north and south to east and west.

John Milner and Associates has been hired as the architecture firm on the project. The project will also require a lot of skilled labor from individuals who work on historic buildings and have “very skilled, very unique skill sets,” he said.

As much as possible will be salvaged and reused, although Updike said a lot of the siding on the Meeting House is not original to the building. Ideally, he said, no one will be able to tell what has been done when the project is complete.

“When you come out and look at the buildings, we want it to be, ‘What did you do?’ We don’t want it to be blatantly obvious,” he said. “We want it to be the same Shaker Village experience you have now, only we want it to be preserved for 50, 100 years. We’re looking that far out in the future with our work.” 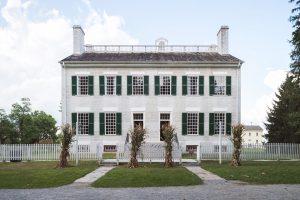 Photo courtesy of Shaker Village of Pleasant Hill
The Centre Family Dwelling at Shaker Village will be undergoing renovations, along with the Meeting House, later this year thanks to a $5.1 million grant from the Lilly Endowment Inc.

Built between 1824 and 1834, the Centre Family Dwelling was named for its location in the center of the village. The structure served as a home to up to 100 members of the Shaker Village community, according to information provided by Director of Marketing and Sales Amy Bugg.

The Shaker Village website states the Centre Family Dwelling had 14 bedrooms, kitchens, a dining room, a cellar with food storage rooms, an infirmary and a large meeting room.

“The Centre Family has nearly a half-acre by the time you count up all of the floors and floor space within it,” Updike said. “It’s a very large building.” 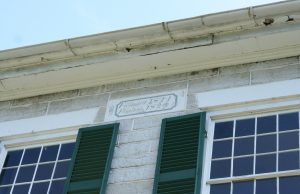 Kendra Peek/kendra.peek@amnews.com
A date on the front of the Centre Family Dwelling says the building was started in 1824 and finished, or completed, in 1825. It actually took 10 years to complete the building.

In fact, it’s the largest building at Shaker Village and believed to be the second largest stone building in the state. The biggest is the Old State House in Frankfort.

“It’s an important building from that element,” he said.

Efforts were made to transform the dwelling into a museum, but the building has operated as a gallery for crafts and antiques. Restoration of the building has been in phases, according to information provided by Bugg:

• in 1973, the bell tower and balustrade were restored and exterior stonework began;

• in 1978, the gutters were repaired and painted and the cellar was finished with a new floor and updated lighting. 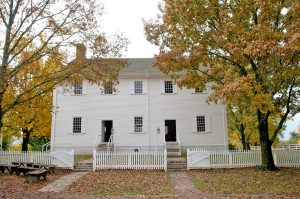 Photo courtesy of Shaker Village of Pleasant Hill
The Meeting House at Shaker Village will be undergoing renovations, along with the Centre Family Dwelling, later this year thanks to a $5.1 million grant from the Lilly Endowment Inc.

Directly across the lane, the Meeting House was built in 1820, after the first meeting house was damaged by the New Madrid Earthquake. It was used as a gathering place by the Shakers for their worship services.

“It’s double a normal-sized house, if you want to think about it that way,” he said.

The Meeting House was constructed using a truss system, like a bridge, which spread the weight to the exterior walls. This eliminated the need for interior columns on the first floor, allowing for a large open room in which to worship, Updike said. 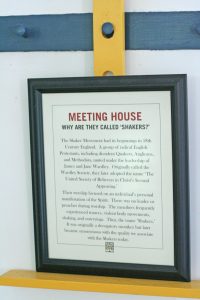 Kendra Peek/kendra.peek@amnews.com
Information about the Meeting House at Shaker Village, which will be undergoing renovations along with the Centre Family Dwelling.

The $5.1 million project will include work on both buildings, including repairing mortar joints and sealing to keep out water in the foundations.

“That will be a labor intensive job,” he said. 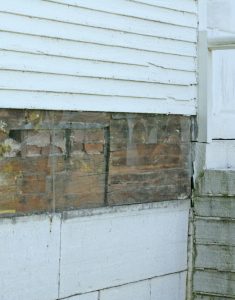 Kendra Peek/kendra.peek@amnews.com
The different types of materials used to build the Meeting House at the Village can currently be seen through a plexiglass-covered opening on the building. The Meeting House and the Centre Family Dwelling will be undergoing renevations this year thanks to a $5.1 million grant from Lilly Endowment Inc.

“When I say changing the grade, I mean changing it slightly. It’s not like we’re adding feet,” he said. “… A little bit of soil can make a large difference in that.”

They plan to replace windows in each building. The seals have sustained weather damage and are tilting in, allowing water to come in. This has allowed for rot around the seals. Window panes also fall out and opening them has become quite difficult because of this.

• removing the gutters, cleaning and restoring them and putting them back on the respective buildings if possible;

• repairing the interior plaster, which has been damaged due to moisture; and

The siding on the Meeting House will be repaired. If possible, the siding will be preserved on the buildings, but if not, it will be replaced. It will be a “board by board” decision, Updike said. He explained that very little of the siding is original to the building, but much of it dates back to the late 1800s.

There will also be work done on the dwelling’s bell tower, which has been replaced over the years due to water damage; and to anchor up the stairs.

Both buildings will also receive geothermal heating and air conditioning — the first time for the Centre Family Dwelling to have units that are not free standing inside the structure. This, Updike said, will help preserve the buildings better, because they will be able to keep them climate-controlled, and will be able to bring out textiles and other displays.

Everything being done, Updike said, can be easily undone in 50 years if better options become available.

“That’s one of the things we want to do with historic preservation work — we want to make all of our alterations to be reversible … If someone else were to come along in another 50 years and have a better technique to preserve the building without that, they can take those alterations that we made out,” he said. “We have to think forward that way. The Shakers were forward-thinking people and it ties through with that mindset.”

Ideally, he said, all the work will begin in the next few months. The buildings will be closed for about nine months to a year, hopefully reopening in the spring and summer. The timeline is still vague, however, he said.

“We want to program around the project,” said Bugg.

Preservation is key to Shaker Village and there are preservation tours offered to highlight that, which Bugg said have been popular and will likely remain so. Currently, those include tours to see what the project at the Centre Family Dwelling and the Meeting House will entail.

Updike said “hard hat tours” will also be available during the project to see the work in progress.

“We hope your experience here will be enhanced by our work,” Updike said.

Eat, Drink and Be Irish — with the Uplifters…