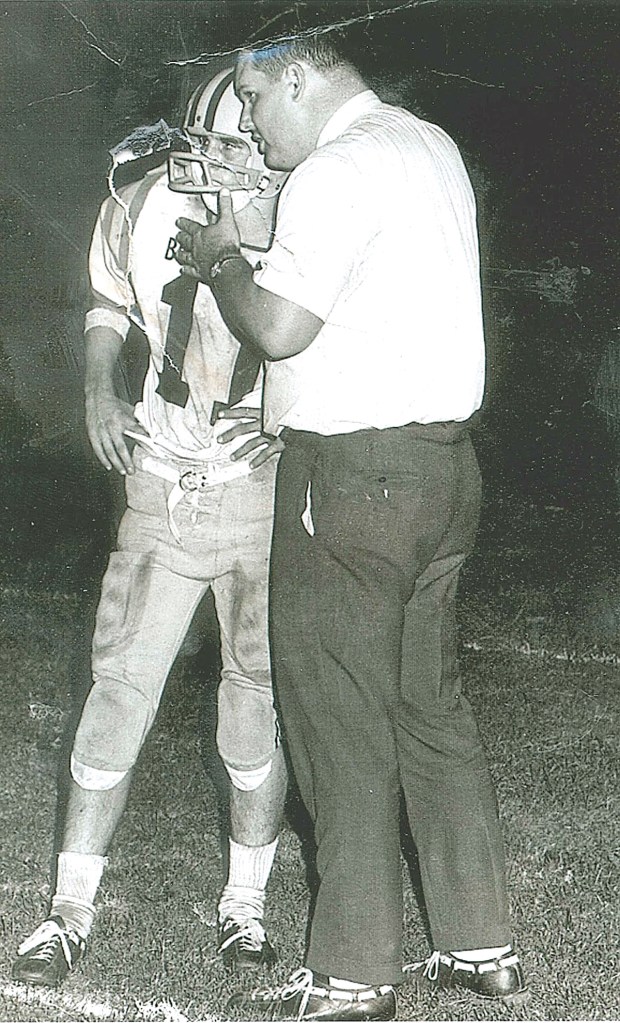 Photo courtesy of David Buchanan The Advocate-Messenger has named its annual Coach of the Year award in honor of John Buchanan, the former head football coach at Boyle County and Mercer County. Buchanan, right, talks with Boyle quarterback Robert Allen Yankey during against Danville on October 10, 1969.

When thinking of a name for the annual Coach of the Year award, one name rose above the rest, longtime Mercer County and Boyle County football coach John Buchanan.

And with the family’s blessings, that’s what the award has become — the annual John Buchanan Memorial Coach of the Year award.

“We miss my Dad so much and gestures like this mean the world to us,” David Buchanan said. “Even though it has been almost two years since he passed and 40 years since he coached his last game, I think about him every day and miss him. For him to be remembered this way is a comfort to our family.”

David Buchanan is getting the Mercer football ready for his third season as head coach at his alma mater. His father’s influence still lives on with him and other coaches who worked under the elder Buchanan, who passed away two years ago at the age of 72.

“For all that he would tell me, his example was the biggest influence,” David Buchanan said. “The number one thing in coaching is that you take care of your kids. Yes, he said that in words, but I saw him live that out everyday. It was always clear to me that he could care less what he got out of it. It was all about his kids.

“Everyday when I wake up, I want to serve Christ and be ‘John’s boy’ (I was often called that from roughly the age of 16 through about 40 on Friday night). Being John Buchanan’s son means he would expect me to serve Christ, serve others and be tough enough to stay focused on my purpose despite the trials and distractions. I have a long way to go in that regard, but I know what my Dad would expect of me and I am trying to be that man.”

John Buchanan’s name continues to hold weight among area programs. He was an assistant coach at Lakeview High School in Decatur, Illinois, before returning to Kentucky to serve as an assistant at Lafayette. From there, he took over the Boyle football program, also starting the wrestling program. After not winning games during the 1967 and ‘68 seasons, the Rebels went 9-1-1 in Buchanan’s first season.

He went from Boyle to Mercer, where he served as head coach in both football and track. His first two seasons there were the program’s first winning records in its history.

But more than numbers and records, David Buchanan again returns to the relationships his father built with his players as his lasting legacy.

“How much he loved his players,” David Buchanan said when asked what his first memory is of his father as a coach. “Those old Rebels and Dogs have been great to me and have reminded me often the past couple years how much they loved him.

“I remember being with him the night he passed out gear to his first team at Boyle in 1969. Both Boyle and Mercer made dramatic turnarounds when he became their coach and he was proud of those guys beyond words for how they became winners. I think he was even prouder of the foundation those guys built for both programs, even when the won-loss records were not as good.”