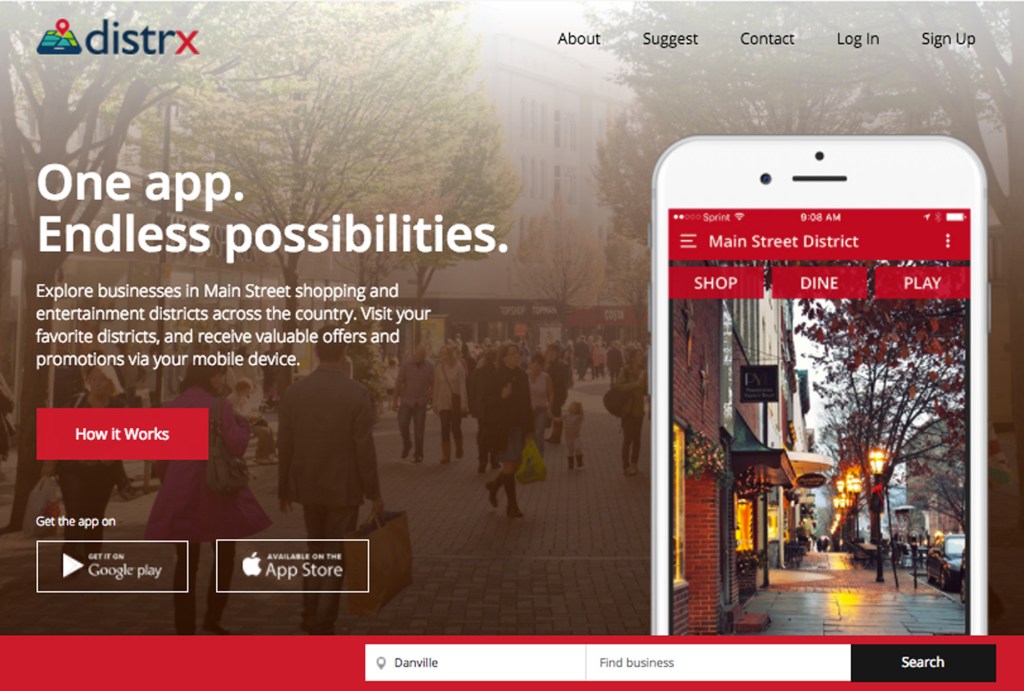 The app allows businesses, for a fee, to provide special offers and information to users of the Distrx app who come in proximity to their stores.

“I think it’s a great thing to bring us into the 21st century, to tap into that mobile technology market,” said Nick Wade, director of Heart of Danville Main Street Program. “I encourage everyone to download it; it’s going to be a great thing for downtown.”

Wade said the Heart began conversations with an app developer in 2016. It settled on joining Distrx because of the reach the app had.

“The app is available nationwide, which is one of the things that was a draw for me — that it is not specific to Danville,” he said. “We don’t have to tell our visitor, ‘You need to download our app … Someone can download (Distrx) and use it, and then they can go to Wyoming and be able to use it there as well.

Bardstown was the first Main Street program in the state to use the Distrx app, Wade said.

“I was talking to their Main Street director and their merchants really like it,” he said. “The app has some really interesting features for businesses.”

For $120 a year, businesses, restaurants and other organizations that want to be included, such as churches, can participate. They will receive an iBeacon, a small transmitter that notifies people using the app when they are near the location. It can be used to offer discounts, share details about the location and other information.

“It helps draw people into the business,” he said. “It’s been really effective for other Main Street communities.”

Those who participate will also receive notice on the app’s map, with the placement of a red pin at their location. Eventually, stickers and window clings will arrive so participating locations can let visitors know.

“It will say, ‘Welcome to downtown Danville.’ So they will know the app is up and running; there are things to check out,” he said.

Heart of Danville’s upcoming events are automatically added to the app and others’ events can be included as well, Wade said.

“There’s a conversation that’s been happening in the community of a one-stop-shop for events. Everyone has their own events going on and it’s been really hard to keep up with everything,” Wade said. “I would ultimately love to see this app become that place.”

Distrx is working on new features, such as a walking tour feature. It will enable the historic buildings in the city to be outfitted with their own iBeacon devices and related audio files, videos and photos.

“There’s really some interesting technology coming through,” he said.

Wade has had the app on his phone for several months, and said he’s had the opportunity to watch it change.

“I actually really love it,” Wade said. “It’s very user-friendly and intuitive … everything about the app is easy.”

Distrx is available for free in the Google Play store and in the App Store. Businesses interested in participating in the app can visit distrx.com to learn more.