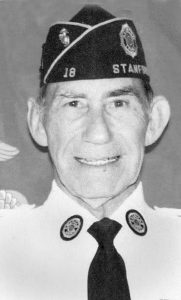 James Robert Southard, 80, of Stanford, KY passed away on Monday, July 10, 2017 at home. Born May 12, 1937 in Pine Hill, KY to the late Mitchell Bussell and Martha Southard Smith, he was a Vietnam Veteran, a retired member of the U.S. Armed Forces where he served in both the Marines and Air Force, and was a retired employee of IBM. He was a member of Caswell Saufley American Legion Post #18 where he served honor guard details on over 800 funerals. He was also a member of Crab Orchard Baptist Church.

In addition to his parents, he was preceded in death by three brothers, Charles Bussell, Billy Allen Bussell, and Don Southard; and one sister, Nell Coffey. Visitation will be Sunday, July 16, 2017 at Spurlin Funeral Home Chapel, Stanford from 5-9 p.m. Funeral service will be 1 p.m. Monday, July 17, 2017 at the funeral home with interment following at Camp Nelson National Cemetery in Nicholasville, KY at 2:30 p.m. Caswell Saufley American Legion Post #18 will provide military rites and will also serve as casket bearers.