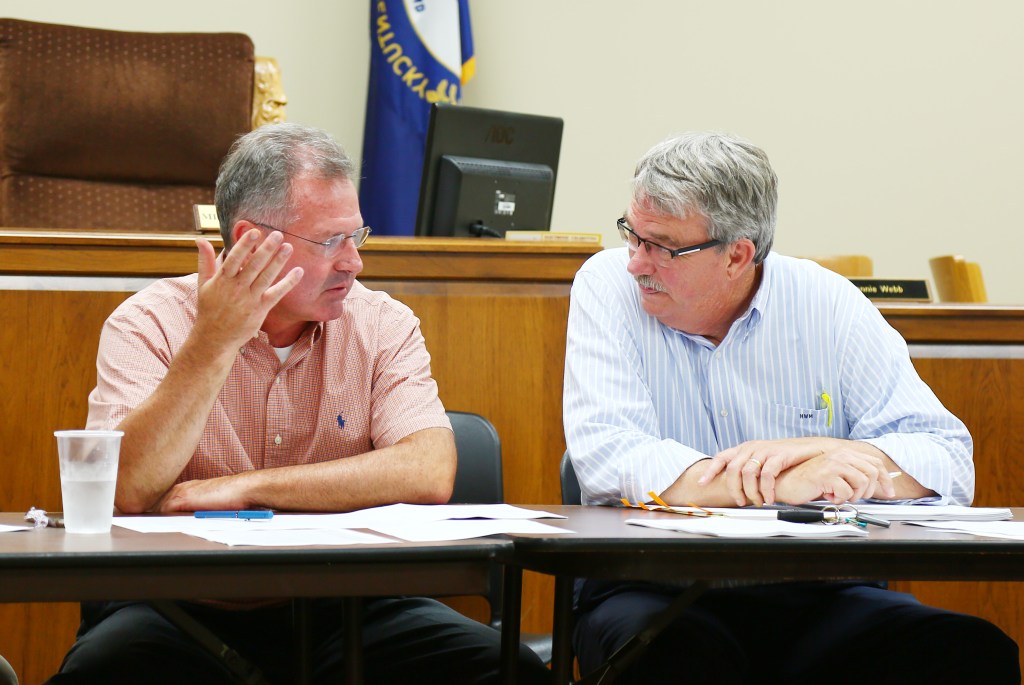 Boyle and Mercer magistrates sat down across from each other in joint session for perhaps the first time in more than 20 years Thursday. The elephant in the room that brought them together: the ever-rising costs of operating the Boyle County Detention Center and whether Mercer County is paying its fair share.

Mercer magistrates, along with their county attorney and judge-executive, question if they’re paying more than they should toward the jail’s budget.

Mercer is expected to shoulder 35 percent of the jail’s net costs, per the interlocal agreement signed by both counties in 1996, when the joint jail effort began, Mercer County Judge-Executive Milward Dedman said.

“For the past two years, we’ve been at about 32 percent; the year before that, it was about 31 percent,” Dedman said.

The most recent ratio shows Mercer County inmates making up about 29 percent of the jail population, he said. 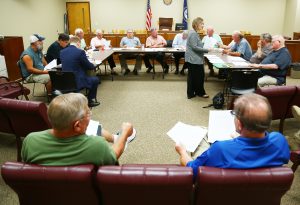 The fiscal courts from Boyle and Mercer counties met in a joint session Thursday evening to discuss how much Mercer County currently pays toward the joint jail budget shared by the counties.

“We’re at the 35 percent, but if you actually use true numbers, we would have been at 29 percent,” he said.

“So if we’re talking about 3 percent, that’s $70,000 of inmate expenses that aren’t our inmates that Mercer County taxpayers are sending over there,” he said. “… $70,000 is a pretty big chunk of change … and I based that number on us being at 32 percent and not being any lower.”

Dedman said whatever the difference is, “it’s not that Mercer County can’t pay it.”

“We just feel like we’re paying a lot of percentage of Boyle County’s costs,” he said.

Boyle County Judge-Executive Harold McKinney said he was “sympathetic — to a certain degree” with Mercer County’s complaint, but there are also a lot of costs associated with running the jail that Mercer doesn’t handle because it’s officially Boyle County’s jail.

Examples McKinney listed: Boyle County provides its information technology director to the jail without any of his costs coming out of the joint jail budget; Boyle County Treasurer Mary Conley puts in many hours maintaining the jail’s budget; Boyle County’s Public Works Department does work on the physical jail building.

(McKinney said at another meeting Friday that Boyle County doesn’t send its Public Works employees to the jail very much any more and that workload is not what he thought it was.)

“While I’m sympathetic with the need to get it under control … when you start looking at how costs are split up, it’s probably not that unfair,” McKinney said Thursday.

McKinney later noted that the bond on the jail is in Boyle County’s name, so Mercer County technically doesn’t have any of the jail debt. That means Mercer County could walk away and leave Boyle County on the hook for the debt by itself, he said.

And Mercer County gets half the benefits of the new outpatient drug treatment program being run by the Shepherd’s House, a program that Boyle County “did all the work putting together,” McKinney said.

“Mercer County has been a wonderful partner, and I hope we can continue to be partners and I’m sure we will be,” McKinney said. “But that’s some of the things we have to think about when we start lowering this floor.”

Boyle County Magistrate Phil Sammons had a different perspective on the situation.

Sammons said later in the meeting, “If you don’t like what you’re paying, take them out and take them somewhere else.”

That caused a stir in the meeting, and McKinney spoke over the cross-talk: “Hang on here — that’s not the agreement. We’ve worked together 21 years, let’s don’t end it on a Thursday night in the Mercer County Fiscal Court.”

Sammons said near the end of the meeting he thinks Mercer and Boyle counties “have always been good neighbors.”

“If I offended anybody, I apologize,” he said. 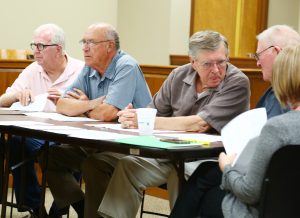 Sammons said Thursday’s meeting was the first in his lengthy time on the Boyle County Fiscal Court that Boyle and Mercer courts held a joint meeting.

During the meeting, McKinney asked what Mercer County’s proposal is.

“What do you think would be fair, Harold?” Magistrate Tim Darland responded.

“Honestly, I think it’s fair where we are,” McKinney said. “We do a lot of in-kind stuff. And you’ve got to remember — you all have had all along the option to walk out on this debt. It’s in the agreement.

“… I think when the debt’s paid, that’s the time to renegotiate all this. At that time, I can’t argue with a different combination.”

The final debt payment on the jail will be made in February 2019. 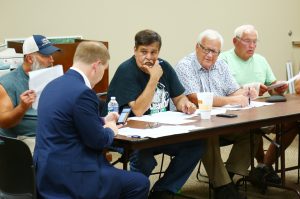 Dedman said Mercer doesn’t have a specific proposal worked out for how to change the floor; they were interested in having a meeting with Boyle County to get a sense for how they felt about it.

The two sides agreed to continue their conversation, and Mercer County plans to bring a specific proposal back to Boyle County in the future.

“If you all don’t hear anything else — I want to be a partner with Mercer County,” McKinney said. “I think it’s good for everybody. I understand what you’re saying tonight. I think we need to think about it, everybody needs to consider it. But I think this has been good for everybody.

“I can tell you it’s cheaper to go down the road together than it is to go the road separately.”