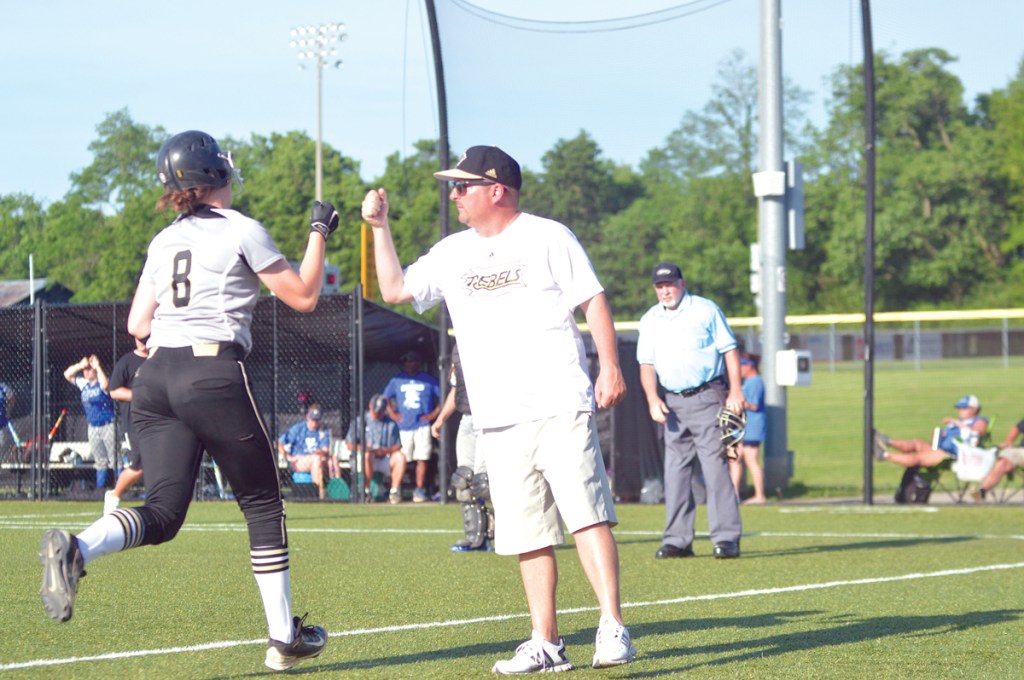 Jeremy Schneider/jeremy.schneider@amnews.com Brian Deem led the Boyle County girls soccer team to the 12th Region finals before coaching the Rebels softball team to a region title and state tournament bid. He was named the first recipient of the John Buchanan Memorial Coach of the Year Award.

It’s hard enough to guide one team through the perils of a season and through the postseason to a spot in a region championship game.

But two in the same year? That would seem to be borderline impossible.

This year, Brian Deem did just that, though, leading the Boyle County girls soccer team to a 24-2 record and third straight 12th Region tournament championship appearance before the Rebels softball team went 28-15 and won the region title to advance to the state tournament.

Those accomplishments set Deem apart from the field and made him the first recipient of the John Buchanan Memorial Coach of the Year Award. The award is named in honor of the longtime Mercer County and Boyle County head football coach.

“It’s not why we do this,” Deem said of the award. “I’m fortunate that I’ve got great kids, great staff members in both sports and great parents. It’s really an award for everyone. It’s an award for our families and the kids and the sacrifices they’ve done; the coaches, the work they put in, not just on the field, but off the field and in the offseason. I always look at these coach of the year awards as a program award.”

Deem credits the culture he’s helped build with the girls soccer program — one that’s translating easily to the softball program — for the success he’s had this year in particular and over his 19 years as a head coach at Boyle.

Deem was in Bowling Green last week with his soccer team at Western Kentucky’s soccer camp. He took his players to Western’s locker room to show them the notes the Hilltoppers players were giving each other.

“They weren’t anything special; it was, ‘Good luck today against FIU,’ or stuff like that,” Deem said. “That’s coming from someone who doesn’t start, but she’s acknowledging the success someone else is having. Which goes back to the power of mudita, understanding that and wanting to share the joys of others’ successes.”

Deem said the culture starts with high expectations, and few coaches push their players harder towards those expectations than Deem. He used words like “blunt” and “polarizing” to describe himself.

He admits his persona on the field has rubbed a few fans the wrong way, but he also said the results and loyalty of his players and their families back up his methods. Deem brought up athletes like Tom Brady or LeBron James, pointing out who they are on the field and court probably aren’t the same men when they’re at home or doing a community service project.

“The person on the ball field when they’re in practice mode or they’re in game mode, the person between the lines is not the same person when they’re off the field,” Deem said. “It’s a little bit of a mindset.

Part of Deem’s mission as a coach is to prepare his players to face life as an adult.

“That soccer goal is eight feet high and 24 feet wide. That plate is 17 inches wide,” Deem said. “That plate does not expand because you can’t throw strikes. That goal does not expand because you can’t put a shot on frame. You’ve got to find a way to do it. That’s life. When you fail, you’ve got to forget about it and move on.”

He admitted he gets a bad reputation among some because all they see are the games or practices. He also admitted he hears what is said about him.

But since becoming a parent seven years ago, he’s been accused also of becoming soft.

“The kids I had before I had my daughter will tell me, ‘You’ve gotten soft,’” Deem said. “I don’t look at it like I’ve become soft. I look at it as I’ve gotten more patient, I’ve learned to pick and choose my battles, when to be a little more firm with the girls versus trying to communicate in a calmer state. But every once in a while, you can’t spare the rod.”

After the Rebels softball team won the region championship in May, many of Deem’s former players were on the field, cheering and celebrating just as much as his current players. And the same holds true for soccer, where he’s had former players in assistant coach roles.

“It’s a part of something that illuminates what we say — you’re Rebels forever,” Deem said. “It’s something you join, you’re a part of and you never leave our family. It’s a part of that culture I want them to have, that pride of being a part of the Boyle County family.

“They could be doing so many different things, but they’re taking two hours or an hour out of their day just to watch us practice and maybe go through memory lane themselves.”

Deem is the only coach in Rebels girls soccer history. He’s posted a 284-104-23 record, third most all-time and second most among active coaches in the state.

In six seasons as the softball coach, the Rebels have played for four region tournament titles under Deem, winning three. He’s 156-85-1 on the diamond, his wins ranking in the top 10 among active coaches in Kentucky.

This year, perhaps his best job of coaching came in the second half of the softball season. After falling to Lincoln County in the second of back-to-back 45th District games in April for an 8-7 record — a point where Deem said many people wrote off the Rebels — they rallied to finish the season on 20-8 run, including 12 games with a winning margin of at least five runs.

Add up his career in both sports and Deem has won nearly 68 percent of the 652 varsity games he’s coached at Boyle.

“The thing I try to make sure that I set between both of them is I’m going to get energy and effort and great attitude,” Deem said. “You’re going to play at full speed, and you’re going to learn by making mistakes. Those mistakes must be done at full speed. I tell them all the time, ‘Fail doing the right way, not doing it your way.’”

There must be plenty of failing going on behind the scenes, because the Rebels don’t falter too much under Deem.