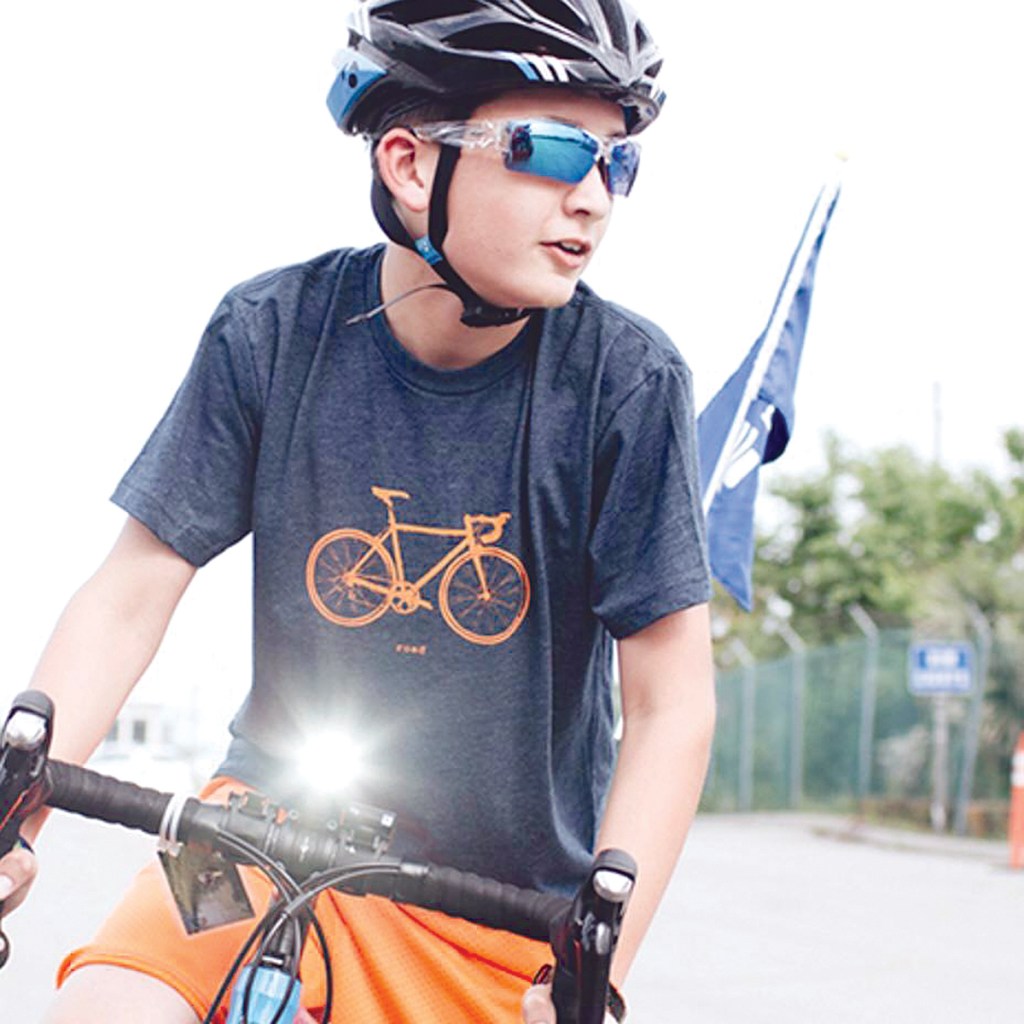 Scotty Parker was angry at his parents. Not because they took away his video games or made him do the dishes.

He was mad because they never told him not every kid in the world had access to the simple necessities in life, such as clean drinking water. Parker was 7-years old and had just learned about areas of the world without access to clean water at church.

So he decided to do something about it. For his eighth birthday, he asked friends and family to donate money to charity instead of giving him gifts. They raised over $600 that year.

This summer, the 13-year old from Charleston is biking across the country in the hopes of raising $500,000 for Water Mission, a nonprofit organization that provides safe drinking water for people who can’t access it due to disasters or lack of resources. He started in Santa Clara, California, on June 3, with a return to his hometown August 1. His travels brought him through Danville yesterday and today, 2,500 miles into his ride.

“It made my heart hurt knowing kids just like me were drinking such dirty water,” Parker said via phone. “That’s when I said we have to help these kids.

“To see the way they reacted, how happy they were just to get clean water, and that’s when I said, We’re helping more people. We’ve got to help even more.”

After his trip across South Carolina bought two-and-a-half water treatment systems for villages in Honduras, Parker and his family took a mission trip to the country to see what the effect was on the population.

Instead of feeling like his work was done, though, seeing the amount of people who still needed help inspired Parker to embark on this trip. He said other than government officials, no one in the country has ready access to clean water.

“I was mad because kids just like me were dying because of water, something that we have in our toilets,” Parker said. “The water in our toilet is cleaner than most people drink. One of the facts I heard that really made me upset, every day more than 4,000 children under the age of five die because of dirty water; that’s every 21 seconds, a child dies.”

Parker is biking 75 miles per day during his trek. He didn’t simply strap on a helmet and get started; there were over 8,000 miles of training leading up to this journey.

Scotty said his dad and his training coach both pushed him hard in preparing for his ride.

“I’ve gotten through this how hard work, training and devotion pays off,” Parker said.

His mom, Pam admitted this was a gradual process, first from raising money at his birthday party to biking across South Carolina. It all made the idea of Scotty biking across the country much more digestible.

“He’s very passionate about what God’s laid on his heart, for sure,” she said. “… He has two little sisters. We don’t have the time to push him and make him stick to a training schedule. This is something he is 100 percent passionate about. He sticks to it. We don’t have to say, ‘Get out there and do it.’ There’s not been one time in the last six weeks where we’ve said, ‘You’ve got to get out of bed. You promised you were going to do this.’ He just jumps up and does it.”

When Scotty first approached his parents with the idea to ride his bike across South Carolina, they wouldn’t allow him to miss a week of school. However, he wanted to do the ride around his birthday — which just happened to be the first day of spring break.

“In our mind, God just always laid it out to where there was no way we could say no,” Pam said.

Scotty said the reaction and support from his family and friends has been overwhelmingly positive.

“One thing I always tell kids, adults feel that feel kid’s ideas are sometimes crazy, but it takes those ideas to get people clean water,” Parker said. “My parents thought about it and said, ‘All right, if we feel like you need to do this, let’s get going.’ All my friends, they weren’t as affected as I was, but they got it, too. They realized the problem.”

Parker’s influence has spread. After the trip to Honduras, his 10-year old sister, Lilly saw the lack of school supplies for the children. Taking a page from her brother’s book, Lilly asked for donations instead of gifts at her birthday party; she raised more than $300 and sent boxes of supplies.

“Sometimes we get pictures of a kid with a new book because of her birthday party; it’s been life-changing for my whole family,” Parker said. “… These people are the same as us. These people shouldn’t have to drink dirty water every single day and be sick all the time. It’s great if what I’ve done inspires other people to help.”

Still, the fact needs to be said — Parker is a teenager and most of his summer vacation is being spent on a bike far away from home. He could be at the beach, playing video games, simply hanging out with his friends.

And while he said he misses his friends and the idea of being a normal, average kid during the summer, he knows this summer needs to be spent doing bigger things.

“This is what I feel I need to do to help these kids. It’s only one summer I’m spending away from a normal life to come out here and do this where it’s these kid’s whole life ahead of them that it’s impacting. My friends don’t need me for a summer.”

From here, Parker will continue his journey towards home and his fundraising goal; he’s already 66 percent of his way to $500,000 as of Sunday evening. To donate, visiting his website scottysride.com .

The journey has been eye opening for Parker. After traveling through the Mojave Desert earlier in this trip, he went through a lush, green valley a few days ago. The difference in climate was striking for Parker, but even more so was the reason for that difference.

“I looked at it and I was like, ‘Holy cow, this is the exact same thing was saw in the Mojave Desert, except there’s water,” he said. “Everything is green, there’s life here. It’s cool to see what water can do.”