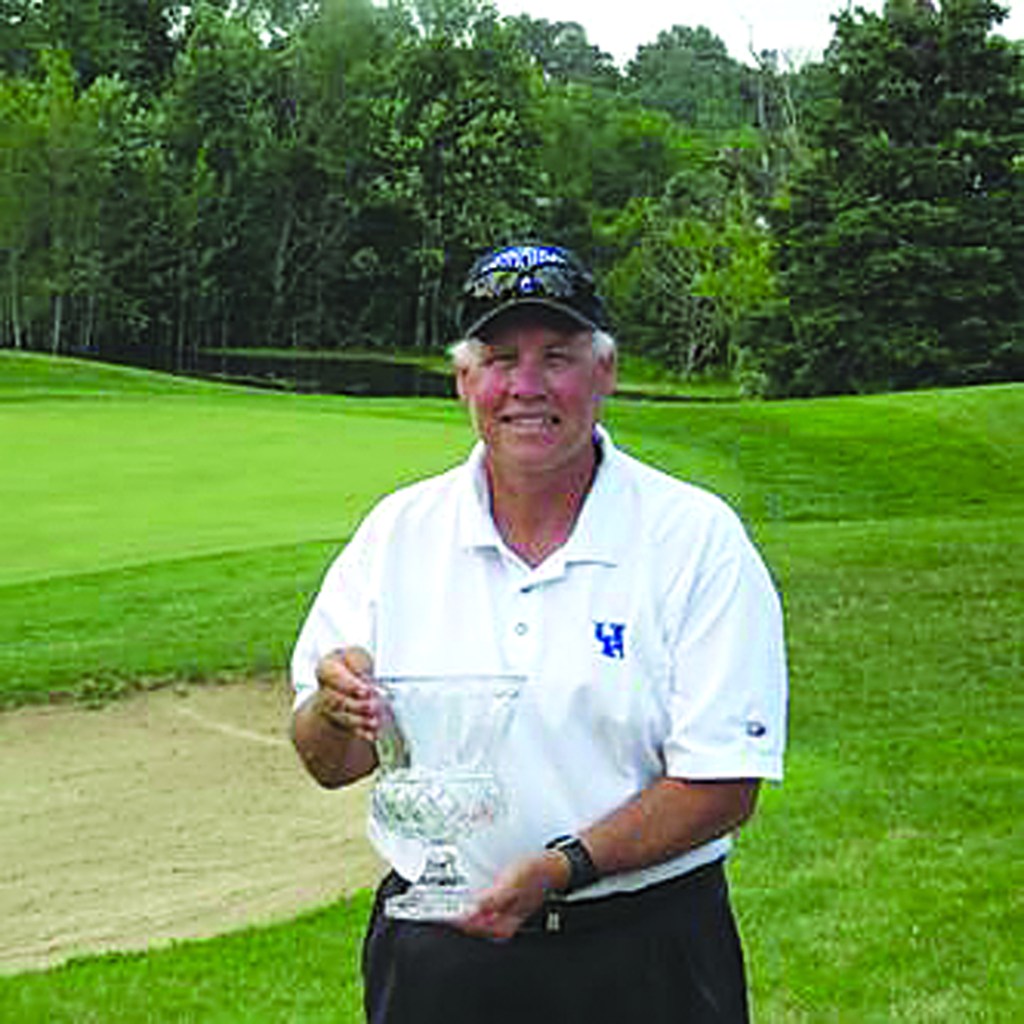 Chris Hill has championships before on the golf course. But nothing compared to last week when the Danville resident won the KGA Kentucky Senior Match Play Championship at Oxmoor Country Club in Louisville.

A 1976 graduate of Danville High School who was All-State in football and basketball, Hill had to survive three days of golf — a qualifying round on Monday and two matches on each Tuesday and Wednesday to claim his coveted title.

Hill was the low qualifier thanks to a 2-under-par 70, giving him the second seed behind defending champ and top-ranked senior golfer Steve Humphrey. Hill won his two matches on Tuesday in close fashion, 2-and-1 and 1-up. His Wednesday matches were just as close, winning his semifinal match 1-up before claiming the title with a win over Humphrey in 19 holes.

With high temperatures and humidity, Hill’s two days were exhausting. He had never played four rounds of golf on two straight days, and when he made the turn in the championship match, it all started catching up with him.

“We were walking up the hill after the ninth hole and I said to him, ‘I feel like I just walked up Mount Everest,’” Hill said. “There were times when I would bend down to put the tee in the ground, I would stand up and get lightheaded, dizzy.”

“I lined up the putt, I’m standing over the putt and it’s hard to focus, I’ve got all these thoughts going through my head,” Hill said. “I said, ‘If you miss this putt, nobody’s going to think anything less of you.’”

On the playoff hole, Hill striped one of the best drives of his week while Humphrey mishit his drive. Hill arrived at the green sitting in two while Humphrey, who found water twice, was sitting in four. After Hill rolled his eagle putt within three feet, Humphrey conceded the match.

While his putting has improved through the summer, Hill said his driver gave him the chance to win the trophy.

“Seventeen, 18 and the playoff hole were the best three drives I hit all week,” he said. “I was able to get all that (stuff) out of my head and focus.”

Hill admitted getting the second seed and not facing Humphrey until the final was important to his chances. And beating the best golfer in the state made the win even sweeter.

“It puts the icing on the cake, to play my best against his best,” Hill said. “We hit some pretty poor shots, but we both gave it our all and strived through our second round that day. We both did the best we could that day, and it makes you feel good to beat the best.”

He was the former jailer in Boyle County and owns Chills Quick Stop in Danville, where he and his wife work three or four days a week. He’ll also put in countless hours on the course honing his game.

“I’ll go to the Country Club and hit range balls or go to a hole and practice chipping and putting for hours,” Hill said. “(Monday), we were off so I spent four hours on 17 just hitting wedge shots.”

It’s all that work which also makes this victory even better.

“That’s what I told the head of the KGA when he handed me the trophy, ‘This make all that work through the years so rewarding, so fulfilling, all those sacrifices you make,’” Hill said.

Hill travels to the Daniel Boone Invitational this weekend at the Frankfort Country Club, and he’ll also play in the Kentucky Senior Amateur Championship at the end of August at Heritage Hill Golf Club in Shepherdsville.

No matter the tournament or course, Hill said he’s bringing something extra to the course — confidence.

“I’ve played the best senior golfers in the state and came out the victor,” he said. “It just really makes the confidence, it’s hard to say. There’s been so many tournaments where I’ve miss hit a drive or I lost by one stroke, but there’s so many things you look back at that one shot. This time, going through all the hard stuff and bad stuff makes it easier to get to the good stuff. You’ve been battle tested.”