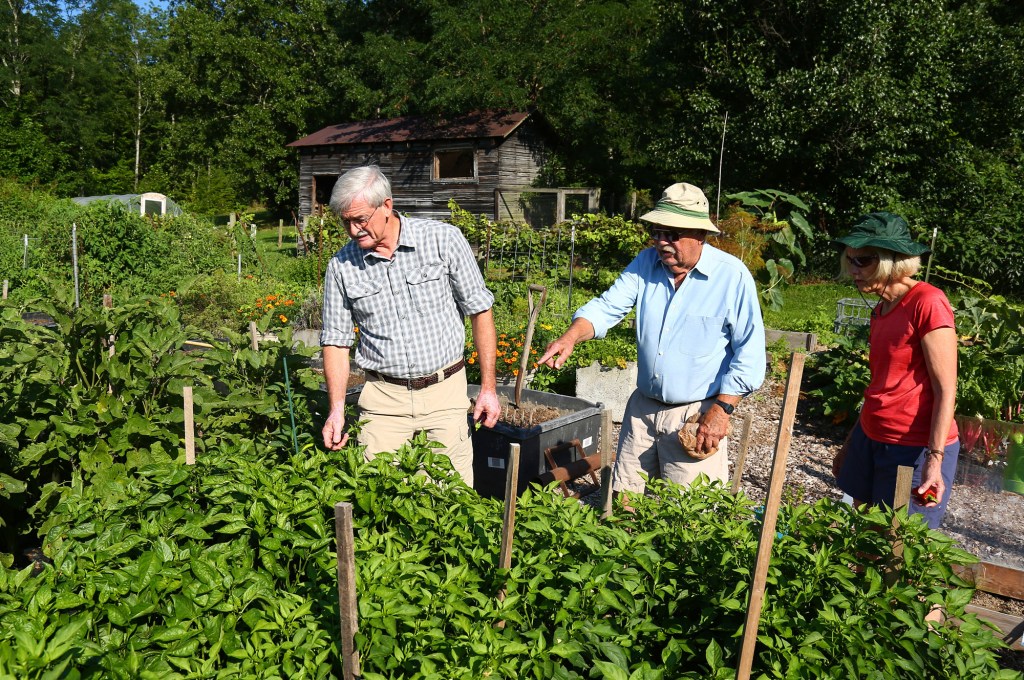 Photos by Ben Kleppinger/ben.kleppinger@amnews.com
Bob Ziesmer, second from right, scouts for vegetables to harvest with Mary Ann and Lyle McGlothlin in one of Ziesmer’s gardens Tuesday morning.

Bob Ziesmer can grow quite a garden. He has three of them at his son’s house south of Junction City.

“My favorite time in the garden is about a month after I plant,” Ziesmer said Tuesday, standing next to waist-high plants drooping with peppers. “I like to see all the young plants.”

He’s not as excited come harvest time — he’s more than happy to let others from his church, First Christian in Danville, help him pick his plentiful crops. 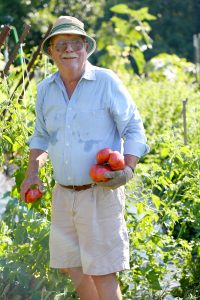 Bob Ziesmer picks tomatoes from one of his gardens at his son’s house, south of Junction City Tuesday.

But Ziesmer’s harvest and what’s being done with it is even more eye-catching than his purple string beans or bright white eggplants.

Growing alongside heirloom tomatoes, lemon cucumbers and concord grapes are some veggies no Kentuckian would probably be able to identify at first glance: Aleppo peppers for one; bitter melon for another.

That’s because Ziesmer is growing his garden for a pair of Syrian refugee families that have been sponsored to live in the Danville area. In addition to providing regular vegetables for the families, Ziesmer wanted to give them a taste of their home. 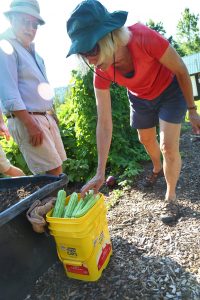 Mary Ann McGlothlin, another member of First Christian who was helping harvest from the gardens Tuesday, said one Syrian family came in September and the second one came in December. Both families have young kids and traveled through other countries fleeing the war currently ravaging their home country before making it to the U.S. and finding a home in Danville through the non-profit Kentucky Refugee Ministries, she said.

Local churches, community members and Centre College joined together to sponsor the families, and the Danville community received an award from KRM this spring for its work helping the families, McGlothlin said.

According to its website, KRM is “dedicated to providing resettlement services to refugees through faith- and agency-based co-sponsorship in order to promote self-sufficiency and successful integration into our community.”

“Each refugee welcomed through KRM receives access to comprehensive services to empower them to make Kentucky home,” according to KRM. “Our Louisville and Lexington offices operate as local affiliates of two national resettlement agencies, Episcopal Migration Ministries and Church World Service.”

Ziesmer said when the families arrived, people at First Christian were talking about what they could do to help them get settled. He didn’t feel up to translating or trying to teach them English; and he didn’t think driving them around would work in his small pickup.

“I thought about my gardening and I began to research Syrian vegetables, Syrian seeds, things that I could grow,” said Ziesmer, who has grown gardens with his son for 20 years. “That’s when I discovered that there’s an awful lot out there, particularly in the heirloom area, that is available in seeds.”

Ziesmer found one source for seeds from around the world in the company Baker Creek Heirloom Seeds.

I got talking to a young woman at Baker Creek Heirloom Seeds and told her what I was doing. … She said, ‘anytime you want seeds, they’re free,’ basically,” Ziesmer said. “So they’re helping us … it’s a family business.”

Kathy McFarland with Baker Creek said the company offers seeds for free through its donation program to schools, non-profits and charitable causes such as Ziesmer’s.

Baker Creek collects seeds from around the world in an effort to protect heirloom seed diversity. It now has more than 2,000 varieties, McFarland said. 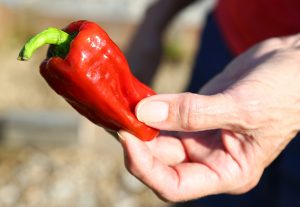 “I found a guy out in Oregon who just sells pepper seeds from all over the world,” he said.

Ziesmer said he got some help from Boyle County FFA and its adviser, Toni Meyers, in order to get some of his more unusual plants started.

Meyers said Ziesmer is “a wonderful man with a great heart.”

“He came to me with all these exotic seeds and asked if my greenhouse class could propagate them for him,” she said. “We jumped at the chance to help him and his mission.”

Meyers said FFA students, who were working to grow plants for their annual greenhouse sale, germinated Ziesmer’s seeds for 10 days, then transplanted them into larger containers. Ziesmer stopped by and picked the plants back up before the FFA sale so they wouldn’t get mixed up with the plants for sale.

“Bob was the brains and the heart of the project,” Meyers said. “My greenhouse class just added a bit of the legs.”

Ziesmer said his “pride and joy” of the exotic veggies are his bitter melon plants.

“Out of 10 seeds, I got three spindly little plants,” he said, standing next to his row of bitter melon plants, now five feet tall and laden with oblong melons that look like squashes. “Look at it now — I can’t control it. It’s all over.”

Tuesday morning, McGlothlin and her husband, Lyle, picked a bucket full of bitter melons — a veggie the refugees are excited about, but that Ziesmer cautioned against eating unless you know what you’re doing.

McGlothlin and Ziesmer agreed the Persian cucumbers he is growing are “amazing.”

Ziesmer, who has traveled the world in the Navy and for business, said in general, Americans have chosen the best varieties of vegetables to plant in the U.S. But he thinks Persian cucumbers are a big improvement over normal cucumbers grown in the U.S.

“He’s going to have to plant Persian (cucumber) starts for all of us next year,” McGlothlin said.

Ziesmer’s gardens are overflowing with produce — to the point that the two refugee families can’t use it all.

The surpluses are being passed on to Grace Café, a pay-what-you-can restaurant in Danville, McGlothlin said.

First Christian grows a “Grace Garden” at its Lexington Avenue location that provides produce for Grace Café, as well.

McGlothlin said the refugee families are participating in English as a second language classes and tutoring; and receiving assistance through services like a school liaison and a translation service from Ephraim McDowell Health.

“They are making Danville their home,” she said. “The whole idea of KRM is to get people into a community and get them settled in a community.”

McGlothlin said she feels taking in the refugee families is important because “we’re called by God to help everybody.”

“Syria is where one of the current conflicts is, and we all worship the same God, we just call them different names and worship them not exactly in the same way. But they all teach, ‘love your neighbor,’” she said. “So to me, it makes no difference what religion they are. This is what we are called as Christians to do.

“I think it’s really neat that Bob found a way to do it that suits his talents.”