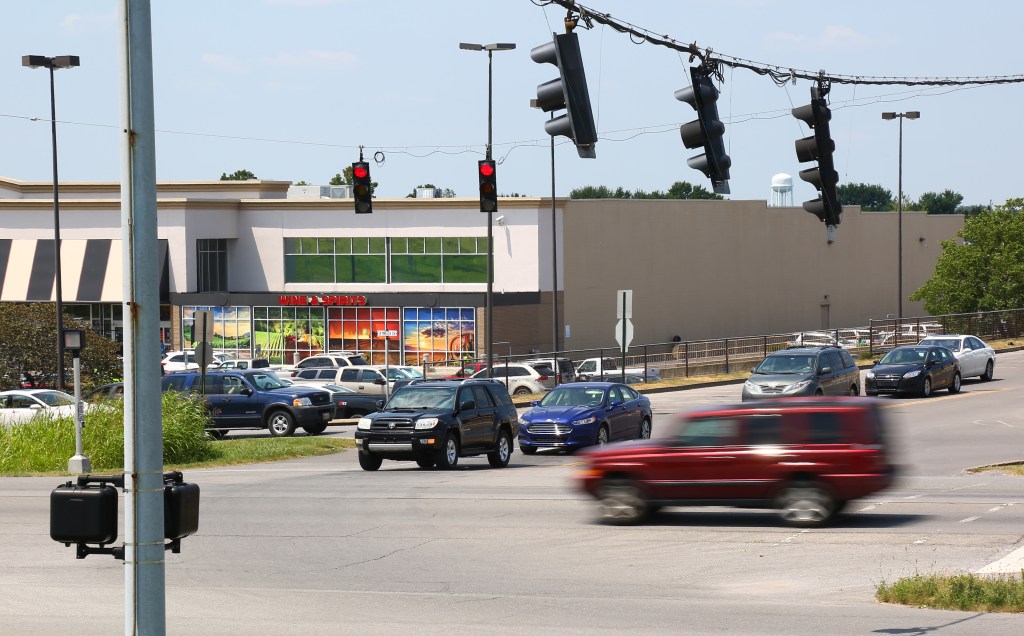 Ben Kleppinger/ben.kleppinger@amnews.com Traffic coming out of the Ridgefield Shopping Center area along the Danville bypass waits at a red light Wednesday afternoon. The intersection is often very busy and could see further boosts in traffic from the opening of a Starbucks and future development across the bypass.

Traffic around the Danville bypass intersection in front of Kroger and Liquor Barn is going to get more crowded as a new Starbucks opens and development of new retail space continues across the highway. But “those are good problems of growth,” said Jody Lassiter, CEO of the Danville-Boyle County Economic Development Partnership.

Lassiter commented on the new Starbucks and the development across the bypass from Liquor Barn and Kroger during his report to the EDP board Wednesday.

“I guess the good news of the situation is kind of overwhelmed by everyone’s concern about the location and the traffic in that particular corner of the world,” Lassiter said in regards to the new Starbucks, which is being built now and is expected to open next year. “The interconnection with the bypass and the three-way stop for the bypass at the corner of the Ridgefield shopping center parking lot is what is of concern to many. But the traffic plans were reviewed, OK’d by the city engineer, and P&Z approved that construction back in the fall.

“So that’s pretty much all I can offer up to folks who have concerns about traffic in that area. As Dr. Roush mentioned in an Industrial Foundation meeting, bottlenecks are good. Otherwise, what do you have? Nothing. So bottlenecks are a good situation.”

Lassiter said development of the land across the bypass, in front of the Danville water tank, is also expected to impact traffic at the intersection in the future.

The May Commercial Group hasn’t nailed down what that development will look like yet, Lassiter said.

“Their one big-box prospect has not committed. So rather than waiting for that big-box prospect to commit, Mr. (C.J.) May is also looking into the potential of developing what was the original plan … which was a multiple-storefront shopping center,” he said, adding there’s “no immediate timeframe on that.”

Adkev, the plastic-injection-molding automotive company planning to purchase the closing Caterpillar facility at the end of the year, is working with the “remaining 20 or so Caterpillar employees and also trying to recapture some of those that separated in March to become their employees,” Lassiter said.

“It’s a wonderful transition that we can hopefully provide to those Caterpillar employees that are dislocated,” he said. “The challenge is that they don’t plan to be operational until January 2019, so how do we bridge that gap? So there may be some intermediary training where some of those employees will have to go to Indiana to the two facilities (Adkev) has there. But they are committed to trying to recapture those employees.”

There are plans for expansion to 150 jobs, which would more than make up for the estimated 75 jobs lost with the closing of Caterpillar, Lassiter said.

• The Boyle County Industrial Foundation closed on a nearly-21-acre lot, selling it to TransNav for potential future development. “The specific plans have not yet been determined, but they recognized the fact that they could be landlocked in their current location at the end of Corporate Drive on the left, across from the Caterpillar facility,” Lassiter said. “So they acquired the lot immediately to the south and 21 acres will give them ample space to grow — as that grows, it’s going to be focused in Danville, as I understand it, rather than in Michigan, so we welcome that opportunity.”

• Also at the industrial park, the Industrial Foundation is planning for construction of a gravel road between Bluegrass Community and Technical College and the Wilderness Trail Distillery property, which will be used for access during the Kentucky State BBQ Festival in September. “The challenge to that is that it’s not just a simple putting in a road,” Lassiter said. “We have to lower potentially gas and water lines at the street level from Lebanon Road, and that is a very expensive proposition. So thanks to the Industrial Foundation for following through and supporting the distillery in that regard.”

• The business interested in locating in front of the Danville Walmart, where King Buffet used to stand, is a “casual dining restaurant,” according to Lassiter’s report. The prospective restaurant chain, identified as “Project Louis,” is waiting to see whether a variance can be secured allowing for encroachment on a gas line setback. McDonald’s is seeking a similar variance for a redesign of its nearby restaurant on Jane Trail. Both variance requests come before the Board of Adjustments today. “If the variance issue is not resolved favorably to allow the necessary building footprint, then the site won’t work for this project,” Lassiter said Wednesday afternoon.