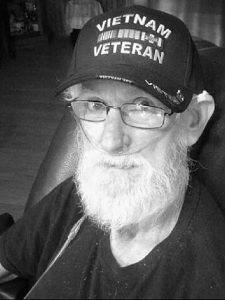 He is survived by his loving wife, Wanda Parsons Brown. William served our country proudly in the Army during the Vietnam War. After returning from duty, he was a truck driver for most of his life.

Also surviving are a son, Brian Gillham of Danville; two daughters, Tina Hatcher of Arkansas and Kristy McCoskey (Mario) of Indiana; a brother, David Brown (Sharon) of Junction CIty; a sister, Brenda McGehee of Portsmith, Arkansas, and several grandchildren. He was also preceded in death by a sister, Christine Redden.

Graveside services with military honors will be at 1:30 p.m. Thursday, July 20, 2017 at Camp Nelson National Cemetery in Nicholasville, Kentucky. www.prestonpruitt.com