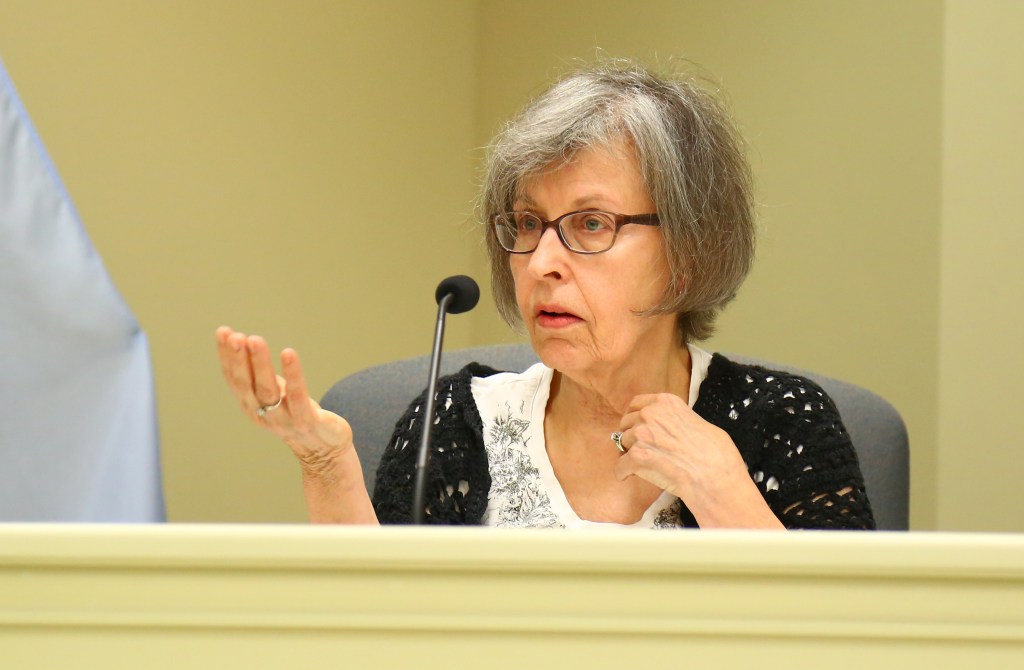 Ben Kleppinger/ben.kleppinger@amnews.com Dana Dixon, a member of the Danville Architectural Heritage Board, speaks during the AHB’s Wednesday morning meeting.

New design guidelines that would relax preservation requirements on development and construction in downtown Danville are moving forward, despite objections from three people that the changes don’t go far enough.

The Danville Architectural Heritage board voted to send the drafted guidelines to Planning and Zoning for further review during the board’s Wednesday morning meeting.

The new guidelines were drafted with help from Cultural Resource Analysts Inc., which was paid approximately $16,000 by the City of Danville and through a Kentucky Heritage Council grant to develop them. The guidelines would help determine what property owners would and would not be allowed to do to historically significant buildings in the downtown Danville Historic Overlay District.

Officials say the new guidelines would remove overly stringent language in the current guidelines that essentially prohibits the AHB from allowing anything that doesn’t strictly meet guideline standards. AHB members say there have been multiple proposals for building improvements from downtown business owners that they liked, but couldn’t approve because of the rules.

The new guidelines would replace a lot of prohibitions with statements that certain design elements are “not appropriate.” That phrase gives the AHB the “wiggle room” it needs to allow unique and creative projects, AHB members have said previously.

But at a public forum on the guidelines held in late June, several members of the public with ties to downtown objected to the use of “not appropriate” and asked that the language be further loosened, perhaps to “not encouraged.”

Three of those same people returned to Wednesday’s AHB meeting to object again that “not appropriate” had not been removed from the proposed guidelines.

Mary Robin Spoonamore, a downtown resident and owner of Jane Barleycorn’s Market and Bar, said she thinks the phrase hurts the ability for people to do business in Danville, in part because people hoping to open a business downtown may not understand that “not appropriate” doesn’t mean prohibited.

“It sort of does a disservice to our community to cast things unnecessarily negative and ambiguous,” she said. “A new person coming to town could look at the guidelines and be deterred right off the bat from their ideas and investments that could positively influence downtown.”

Spoonamore said those people might pick up and “go on to the next city” after reading the guidelines.

Local attorney Patrick McClure said he’s not as concerned about what the current AHB will do with the guidelines, but whether future AHB members will interpret them the same way.

Danville resident and building owner Steve Bottas said “it would be a travesty” for the guidelines to move forward as currently written because more time needs to be taken to address the concerns about the use of “not appropriate.”

Bottas asked the AHB to delay further approval of the proposed guidelines until the concerns are taken care of.

Members of the AHB maintained that the language would not only enable them to say yes to things they currently have to say no to; but it would also be consistent with the fact that the AHB’s primary job is issuing “certificates of appropriateness.” 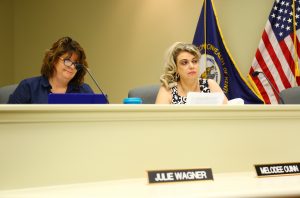 “You’re not applying for a certificate of consideration … we have to say what is appropriate and what isn’t,” AHB member Julie Wagner said. “When you modify a building under our guidelines, you have to know what the benchmark starting point is and that’s what this document does.”

Wagner said statistics released by the Heart of Danville Main Street program show there is a lot of economic activity and investment in downtown Danville already going on under the current, more strict guidelines.

“I think we’ve loosened them; we’ve complied with the federal guidelines,” Wagner said. “We’re at a starting point now to consider things that we never could before and I think it will lead to spur more development.”

AHB member Dana Dixon said she believes the new guidelines “meet the criteria of what we initially set out to do.”

“We now have discretion to decide what is appropriate and what is not,” Dixon said. “These finer points cannot be legislated. And if people are not happy with our decisions, they can request our removal from the board and they can do this.”

Wagner said after the meeting that using the “not appropriate” language in the guidelines also helps provide some education to people who are new to owning buildings with historic significance.

“When somebody comes in and they just bought a historic building, they may not understand what it takes to rehab a historic building,” she said. “So it helps us to say, ‘it’s not appropriate.’ It gives them some guidance on where to start. … For the average citizen who buys a building or opens a business, they probably don’t know historic preservation like we do. It’s just a starting point of saying, ‘this isn’t appropriate for this building.’”

With Wednesday’s approval, the guidelines will be passed on to the Danville-Boyle County Planning and Zoning Commission for further review. Both P&Z and the Danville City Commission must review the guidelines before they could replace the current guidelines. Those bodies may hold further public forums on the topic and could submit comments back to the AHB on possible changes they would like to see.