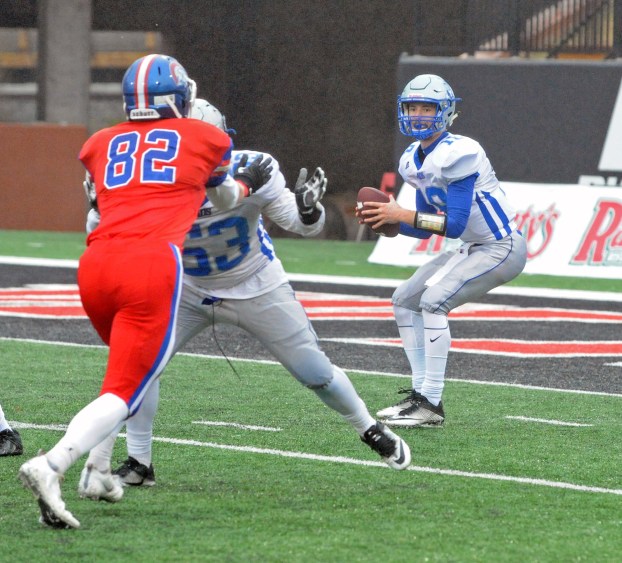 Competitiveness drives Zach Dampier to Scholar-Athlete of the Year award

Zach Dampier’s numbers on the football field are well known. In a nutshell, he graduated from Danville as the school’s most prolific quarterback in its storied history.

But what may not be as well known — and more important — are his academic numbers. Dampier pulled in a 4.5 GPA and 31 in his ACT, astounding numbers especially considering the demands playing multiple sports already placed upon his schedule.

For his academic and athletic success, Dampier has been named the Danville Office Equipment Male Scholar-Athlete of the Year.

“As soon as you’re done with practice, you’ve got to get your school work done and stay on top of it where you’re not lagging behind and have to catch up on it,” Dampier said. “You’ve got priorities. Sometimes you have to do work while other people are out having fun, but that’s what you’ve got to do.

“At the same time, they don’t get to go out and play Friday nights or whatever night for baseball. You trade some privileges for other ones and you’ve got to live with the choices you make.”

His time at Danville wasn’t all playbooks and classrooms, though. Being able to work ahead and keep track of your commitments and priorities allowed him to still have fun.

The biggest stress came this year. He admits he hates reading, and some of the books in his class were awful in his opinion.

“The worst was probably ‘The Invisible Man,’ and it was an independent novel so I was the only one reading it,” he said. “I couldn’t tell anyone about it, they weren’t reading it so they wouldn’t understand my problems.

“You don’t want to spend your whole academic life with your nose in a book. You want to make sure you still have some social life, so you’ve got to make sure you’re not failing classes while you’re doing so.”

Dampier said a friendly competition with classmate and friend Cole Verhoven started all the way back in preschool at Lexington Avenue Baptist Church.

“I’ve had good grades since kindergarten,” Dampier said. “We were always pretty competitive about our grades. They always split us up because we were usually two of the smarter kids in class. We usually compared test scores. There’s always an unspoken challenge that we’re trying to beat each other.”

That drive also helped him when his high school classes started becoming more strenuous. He admitted studying wasn’t necessary early in his school life, but when classes became more difficult, he buckled down and began focusing on proper study habits more.

He mentioned AP World during his sophomore year as the turning point.

“I was always smart, didn’t have to study that much and then all those dates kind of caught up on me with that AP test,” Dampier said. “I got either an A or a B in it, I was fine in the class. But I took the AP test and the first page, it was like, ‘On March 30, 1638, which of these happened,’ and I said, ‘There’s no way I’m passing this.’ I went home and said, ‘I’m sorry you wasted that $90 because there’s no way I passed that.’”

That class taught him to not just rely upon his brain but instead to rely upon studying and retaining information. He hasn’t failed an AP test since then.

He credited his parents, Donny and Karen, with supporting him through busy academic and athletic schedules. He also mentioned his cousin, Molly Pittman, who was a standout soccer player at Danville as well as a top student.

“She knew the struggles and all that, so she helped me out a lot,” Dampier said. “When I had a question, she was the one I went to because she had a similar course load to me. She was more of tudor than the rest of my family these last couple years.”

Dampier will go to Georgetown College, where he’ll play football and work towards a career in sports marketing or management. Not coincidentally, his favorite class in school was a sports marketing class with George Stafford.

“He’s one of those teachers who you know they really care about you, they’re not just there because it’s their job,” Dampier said. “I’ve seen him at games. He lives in Lexington but he stays all night in Danville to watch. He makes you feel like you can tell him anything and you can help him out.”

Alyvia Walker knows what it’s like to have a full schedule. This year’s Danville Office Equipment scholar-athlete of the... read more